The Main Street Electrical Parade is one of the most popular and beloved nighttime entertainment offerings at Disneyland Resort. The parade is celebrating its 50th anniversary this year, bringing some changes to the floats that illuminate Main Street, USA at Disneyland Park, including an all-new float thats diversity and inclusion, inspired by Mary Blair’s iconic style while creating “it’s a small world.”

Related: Days After Its Reimagined Debut, Guests Are Already Asking When Nighttime Spectacular Will End

However, the Main Street Electrical Parade wasn’t the only version of this spectacular nighttime show that underwent some changes, as we recently saw on social media.

Guests of the Tokyo Disney Resort were overjoyed to see a significant upgrade made to the Nighttime Parade, “Tokyo Disneyland Electrical Parade Dreamlights,” as the main float of the parade recently received a glamorous enhancement with the use of LED lights. We can see this new train and drum float in a video posted by MICKEY MANIA (@mickeymania1988) on Twitter.

User @dcurryrice posted a different video comparing the previous float, which made its last performance the day before yesterday, and the new one, which debuted today. As we can see, the LED lights are much brighter and provide a much clearer definition for all the different details on the float, not to mention the light animations are now much smoother, and the new system offers greater possibilities to add various animations.

Compared to the same place today and the day before yesterday, it’s completely different.

The Disney stars are literally sparkling in this nighttime parade of lights and music.

With Mickey and his pals, including characters from Aladdin, Toy Story, and other Disney films, appearing on colorful floats, nighttime in the Park is even more fantasy-filled. 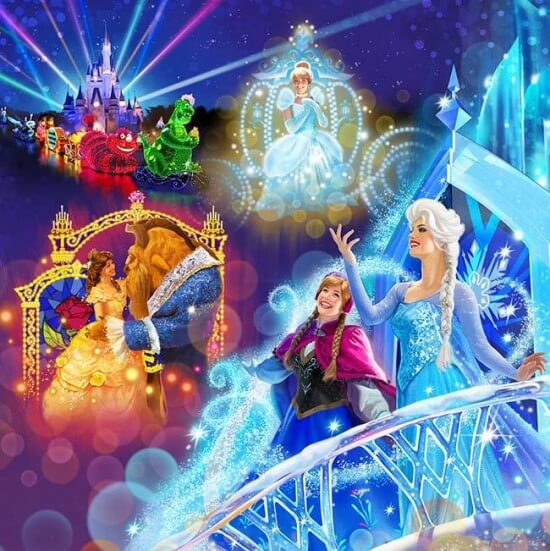 According to the Park’s website, this parade will be presented in an alternate version to ensure that the performances comply with the different health and safety measures set out at the Parks.

For those who have not had the chance to experience this spectacular nighttime or are unfamiliar with it, Tokyo Disney Resort posted a video on the Park’s YouTube channel, showing several floats and characters that perform in this parade, illuminating the Park. You can see the video below or click here to watch it.

The Park also has an alternative “mini parade,” which carries out presentations only on rainy nights. The Park’s website describes it as follows:

When “Tokyo Disneyland Electrical Parade Dreamlights” is canceled due to rain, the mini parade “Nightfall Glow” will be presented instead.

Minnie Mouse, Daisy Duck and their Disney Friends want to have a lovely time, especially when it rains! They appear in this shimmering interlude of lights aboard floats that glow in a rainbow of colors to light up the Park on a rainy night. The parade starts in Toontown, proceeds around the Plaza and through Westernland, and exits through Fantasyland.

The site states that this performance may be canceled due to strong winds or weather conditions to ensure the safety of Guests and Cast Members. The site also advises Guests to contact a Cast Member on the day of their visit for the latest information.

At the moment, it is not clear if other floats of this spectacular nighttime will also be upgraded, but it is possible. Inside The Magic will continue to report as more information is released.

The upgrades made to this float make us really excited to see what other improvements are to come to Disney Parks worldwide.

What do you think of this upgrade? Would you like to see something similar at Disneyland or Walt Disney World? Let us know in the comments below!