While electric vehicle (EV) stocks used to be all the rage, the market has tossed them aside due to economic uncertainty. Investors don’t want to take on more risk than necessary during difficult times, and EV stocks are paying the price.

However, this short-term pessimism can give long-term investors fantastic entry opportunities to some of the most revolutionary companies. Still, investors must do their due diligence to ensure they aren’t just throwing money blindly at companies. Let’s look at two EV specialists and see if they are worth buying.

One to buy: Tesla

Tesla (TSLA -0.54%) is the best-known EV company. This analysis isn’t earth-shattering, but it makes sense to pick the market leader when investing in a sector with lots of busts. It’s not to say others can’t be successful, but Tesla stands out when it comes to investments.

On July 2, Tesla said second-quarter vehicle production rose 25% year over year. However, this figure was down 15% versus Q1. This drop can be attributed to supply chain issues and COVID-19 lockdowns hurting China’s production.

Within the press release was one key phrase: “June 2022 was the highest vehicle production month in Tesla’s history.” This should thrill investors, as it shows the EV maker’s capacity is steadily increasing when it’s not being hampered by circumstances out of its control. Additionally, Tesla recently filed with the city of Austin, Texas, to expand by building another 500,000-square-foot facility. This expansion echoes what Tesla was already doing in Berlin and Shanghai and should boost its EV capacity significantly over its current 1.1 million annual production capacity, or 2.1 million when the Berlin and Texas factories are fully operational.

While production capacity is increasing, head count is not. Tesla is laying off about 10% of its salaried workforce but expects its hourly headcount to grow. While this strategy has upset some, I think it is wise. Salaried employees are overhead and can be trimmed down during difficult times to reduce costs and improve earnings. Hourly laborers are required to build products; if Tesla lays them off, that will certainly dim the company’s prospects.

At 66 times forward earnings, Tesla’s stock is far from cheap. However, its valuation has been significantly reduced over 2022. Investors who have been skittish about purchasing the stock (like me) should use this opportunity to get into the world’s top EV maker.

One with red flags: Lucid Motors

Lucid Motors (LCID 4.32%) is racing to produce vehicles and reach a self-funding state. Lucid’s luxury EVs aren’t cheap, with the least-expensive model starting at $87,400. As a result, the company has relatively few reservations on hand, reporting just over 30,000 as of May 5. These orders translate into about $2.9 billion in potential revenue, but Lucid isn’t even gross margin profitable.

That means it’s selling its vehicles and all the labor and materials that go into its cars for less than they are worth. Throw in research and development and administrative costs, and Lucid’s financials are problematic. As a result, Lucid’s cash balance decreased by $867 million during Q1, dropping its total cash balance to $5.4 billion.

Lucid estimates it has enough liquidity to survive into 2023, although it may find a lack of investor interest if it has to issue to raise funds at that time. Alternatively, Lucid could go to the banks for a loan, but it will likely receive funds with unfavorable terms and high rates, crippling its chances at survival.

This year’s projected production numbers are 13,000 at the midpoint. If he can achieve this figure, Lucid may be able to survive for another year. If not, Lucid may be looking for a suitor to purchase its business.

That’s not a particularly rosy investment case, but it’s not all doom and gloom for Lucid.

Saudi Arabia agreed to purchase 100,000 vehicles over 10 years. The initial commitment is for 50,000, with an option for 50,000 more. These orders are expected to begin delivery no later than Q2 2023. However, this time frame is close to Lucid’s liquidity lifespan. 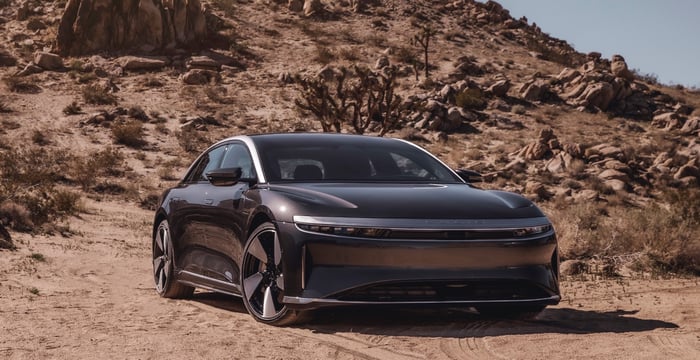 I’m not rooting against Lucid, but I am steering clear as an investor.

In my opinion, Tesla is a far better investment than Lucid, as Tesla has a much greater chance of being around a decade from now. As a result, the EV segment of my portfolio is focused on Tesla. While there are other options out there, it’s hard to make an argument in favor of them versus a Tesla.