AAA’s latest consumer survey finds one-quarter of Americans say they are likely to buy a non-hybrid, fully electric vehicle as their next auto purchase.

Millennials, meaning those currently ages 26 through 41 years old, made up the greatest share of those affirming their plans to go electric at 30%.

Of those who want to buy electric, the common factor is a strong desire to save on fuel costs, with 77% citing this as a top reason for their interest in buying an EV. AAA believes with rising gas prices, consumer conversion to electric vehicles in the US will continue to increase.

A recent Bloomberg analysis of adoption rates around the world indicates the US has passed what it says is a critical EV tipping point, with 5% of new sales being cars that are powered by electricity alone. According to Bloomberg, that 5% mark signals the start of mass EV adoption on the part of consumers, representing a time when preference for tech rapidly flips.

Despite the significant number anticipating their next car purchase to be an EV, AAA’s survey finds consumer hesitation surrounding range and accessibility to charging continues to draw concerns.

However, those fears may start to subside with the announcement earlier this month regarding development of Kentucky’s electric vehicle charging infrastructure. Kentucky received $69.5 million in federal funding over five years for the project. Matching funds brings the total investment to support wider use of electric vehicles to $86.9 million. The state is expected to qualify for more funds in the future, expanding the initial plan.

Already the nation’s top producer of electric batteries, Kentucky’s plan for Alternative Fuel Corridors, which has already won approval by the US Department of Transportation and Energy, will include all 11 interstate routes as well as eight parkways, according to the Administration. All charging stations installed will be fast charging and located every 50 miles, with at least four chargers per station.

“The increase in gas prices over the last six months has pushed consumers to consider going electric, especially vehicle owners within that 26- to 41-year-old age group,” said Lori Weaver Hawkins, public affairs manager, AAA Blue Grass. “They are looking for ways to save and automakers continue to incorporate the seek-after styling and the latest cutting-edge technology into electric vehicles, which appeals to this group of drivers in particular.”

Despite a quarter of those surveyed planning on an EV for their next vehicle purchase, AAA uncovered some hesitation, with range anxiety, purchase price and accessibility to charging stations holding consumers back. The survey found respondents had the following concerns:

“Automakers have made great strides to improve range, yet consumer anxiety over it remains a barrier to adoption for many,” Weaver Hawkins adds. “This anxiety comes despite the majority of Americans having a grasp on the expected range of today’s EVs.” 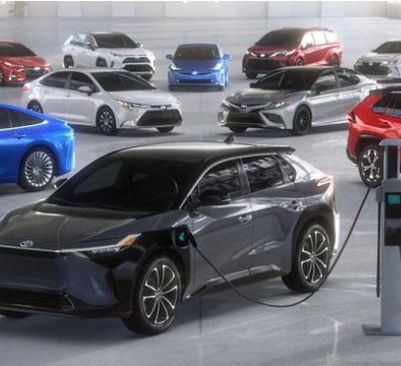 AAA’s survey results indicate six in 10 (60%) drivers believe electric vehicles can travel between 100 to 350 miles before running out of charge, which aligns with today’s electric vehicle capabilities. These findings suggest the improvement in range alone hasn’t been enough to address consumer range anxiety, as had previously been hoped.

“The deeper issue with range anxiety is that it’s going to take more than just improving how far an electric vehicle can go to convince people to make the switch. No one wants to think about the possibility of being stranded. It may be that a combination of improved ranges, along with development of a growing electric charging infrastructure, will begin to address those fears,” Weaver Hawkins continued.

AAA believes having a better understanding of the following aspects of electric vehicle ownership will help consumers overcome these objects:

• Performance: Electric vehicles are more efficient in stop-and-go traffic because the car can recapture energy from braking to charge the battery when decelerating.

• Public vs. Home Charging: A previous AAA survey revealed electric vehicle owners do 75% of their charging at home. Most electric vehicles come with a 120-volt, Level 1 AC charger that plugs into a standard household electrical outlet. Level 1 charging provides between 2 and 5 miles of range per hour, which is adequate for a typical US driver who averages about 30 miles daily.

• Accessibility: Often, at-home charging is less accessible for people living in dense cities or multi-family housing. In those cases, public charging is the only option. The US Department of Energy data suggests there are nearly 55,674 charging stations throughout the nation. While investment infrastructure has improved, more work will be needed to support greater consumer adoption in the coming years.

• Roadside Assistance: AAA is there for its members, which includes servicing those members who own electric vehicles. AAA finds that, much like gas-powered vehicles, the top reasons for roadside assistance requests for electric vehicle owners include issues with tires or needing a tow, but rarely for running out of charge.

For those interested in learning more or who need help with selecting their first, or even next, electric vehicle, check out the AAA Car Guide. This resource provides consumers with reviews highlighting how many advanced driver assistance systems (ADAS) are included in the vehicle, along with other criteria and information. All category winners for 2022 are electric, plug-in electric hybrid, or hybrid vehicles.

The survey was conducted on February 18-20, 2022, using a probability-based panel designed to represent the US household population overall. The panel provides sample coverage of approximately 97% of the US household population. Most surveys were completed online; consumers without Internet access were surveyed over the phone. A total of 1,051 interviews were completed among US adults, 18 years of age or older. The margin of error for the study overall is +/- 4% at the 95% confidence level. Smaller subgroups have larger error margins.