The Mayor of Clearwater has been left less-than-impressed following an unannounced closure of the hospital emergency room overnight on Saturday.

Merlin Blackwell says he wasn’t informed of the 6pm to 7am closure, noting it’s common practice for Interior Health to inform both himself and the community through an online advisory.

“There are several people in our community that watch for those, including the local Fire Chief, so that they can notify, say the Vavenby and the Clearwater and Blackpool residents that this is occurring.”

At the same time, he notes communicating the shutdown of the hospital’s emergency room is important information for first-responders, including Clearwater’s fire department.

“It’s also a way for them to get their volunteer first responder staff ready in case that they have to help out the ambulance service or somebody else because we don’t have that ER open.”

Blackwell says he will be meeting with Interior Health officials on Monday to discuss this further.

The unexpected weekend shutdown of the Clearwater ER due to staffing shortages isn’t unusual, with the emergency room at Dr. Helmcken Memorial Hospital being shuttered around 2-dozen times since the start of the year. 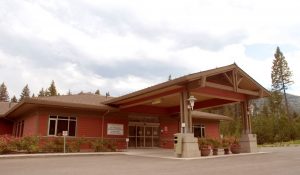 Interior Health has said the recent series of closures at the emergency department in Clearwater have been made with patient safety in mind.

Speaking last week on NL Newsday, IH Executive Director of Clinical Operations for the Thompson-Cariboo, Carl Meadows, says they’ve only got four of the eight staff that are needed to staff the facility at the Dr. Helmcken Memorial Hospital.

He says nurse managers are spending every moment of their day trying to fill those gaps.

“Human resource challenges are occurring in all sectors right now, and healthcare is not immune to this,” Meadows said. “It is really challenging for the community to have to see these closures, and our decision to close – its not even a closure, its diversion to Kamloops – is really with patient safety in mind.”

The ER shutdowns have drawn the ire of both local and provincial politicians, including the MLA for the area, BC Liberal Peter Milobar, who has previously suggested the closure of the emergency room representing a safety concern.

“The solution of telling people to go to Kamloops to an already overrun hospital just makes the problem worse overall, and in the long term we are starting to see that build and build and build. It is not good for patient care,” Milobar said.

“The residents of Clearwater and the valley deserve to have a hospital operating at the level of care and standard that it was built and designed and funded for.”

Clearwater’s woes this weekend come at the same time the community of Ashcroft has also been forced to deal with a weekend shutdown of it’s hospital’s ER.