The judging committee for the first Silk Road Global News Awards (SRGNA) met in Beijing Wednesday. The meeting was chaired by Fang Jiangshan, Deputy Editor-in-Chief of People’s Daily and China Director of the judging committee, with other members joining in person or through online means.

The judging committee, consisting of 21 members, reviewed and confirmed the results of the award’s second evaluation round. All results were confirmed by unanimous or near unanimous votes. The work “Kazakhstan Belt and Road Initiative: The road to somewhere” was among the 19 shortlisted works for the first Silk Road Global News Awards. Mushahid Hussain Syed, chairman of the Pakistan-China Institute and head of Pakistan’s “Friends of Silk Road” club, was listed as a finalist for the Special Contribution Award of the first Silk Road Global News Awards. The evaluation of the Awards thus entered the final review stage by the council of the Belt and Road News Network (BRNN).

BRNN’s close cooperation can be traced back to as early as 2019. On April 23, 2019, BRNN held its first council meeting, to which Chinese President Xi Jinping sent a congratulatory letter.

Xi expressed the hope that council members will carry forward the Silk Road spirit, strengthen communication and cooperation and do more work in promoting policy communication, infrastructure connectivity, unimpeded trade, financial integration and closer people-to-people ties, to create a sound environment of public opinion for the building of Belt and Road and make the initiative benefit more people from Belt and Road countries.

Encouraged and inspired, the first BRNN council decided to establish the SRGNA, which is the only international journalism award under the framework of the “Belt and Road” multilateral cooperation mechanism.

Fang pointed out during the meeting that media is a significant force in guiding public opinion, enhancing people-to-people ties between countries and regions and telling stories of cooperation under the Belt and Road Initiative (BRI).

Adhering to the principles of promoting peaceful cooperation, openness, inclusiveness, mutual learning and win-win cooperation, SRGNA honors media colleagues and people from all walks of life who recognize, spread and interpret the cooperation concept and practice of jointly building BRI. The Awards aim to build a consensus in which everyone attaches great importance to the development and joint cooperation needed to promote the great undertaking that is building a community with a shared future for mankind, Fang said.

Based on this, the Deputy Editor-in-Chief raised four advocates, stressing that development is the eternal theme for mankind. He called on viewing issues from the perspective of development, understanding the trends shaping global development, giving full play to the important role of media in disseminating information, strengthening positive narratives in order to work together to promote global development.

Fang stressed that media should give full play to the role of the cultural exchanges. Through the broader communication dialogue, more diverse cultural exchanges, more close interaction, media personnel should strengthen understanding, and promote the values ​​of equality, mutual learning, dialogue and inclusiveness.

As a pioneer, SRGNA follows an open and transparent selection process, giving full play to standardization, authority, openness and internationality. As the Awards were open to media organizations and individuals from countries and regions along Belt and Road, a total of 4,485 entries from 80 countries and regions were collected during the entry phase.

It is a long-overdue initiative of great significance. It highlights the best among our journalists and also shines a spotlight on the Silk Road Initiative, said Moegamat Aneez Salie, Editor-in-Chief of South Africa’s Independent Media (Pty) Ltd.

“The BRNN does a great job in providing a counter-balance to the dominant Western news networks, which are often biased and give a distorted view. Through the BRNN we are able to receive news and views directly from the horse’s mouth, so to speak , which has proved critical, especially with the COVID-19 issue,” Salie said.

The media’s role is critical in providing the public with ethically produced content, to dispel fake news and to provide unbiased and ethical content, and thereby strengthening the Belt and Road, Salie said.

“The SRGNA is groundbreaking,” said Wu Minsu, Deputy Director of Faculty of Journalism and Communication of Communication University of China. Wu believes that the Awards bring together outstanding works from various countries and regions, reflecting the beautiful vision of different civilizations pursuing exchange and mutual understanding.

In the future, the spillover effect of the Awards, which promotes communication, creation and dissemination through the award, will be further manifested, she said. 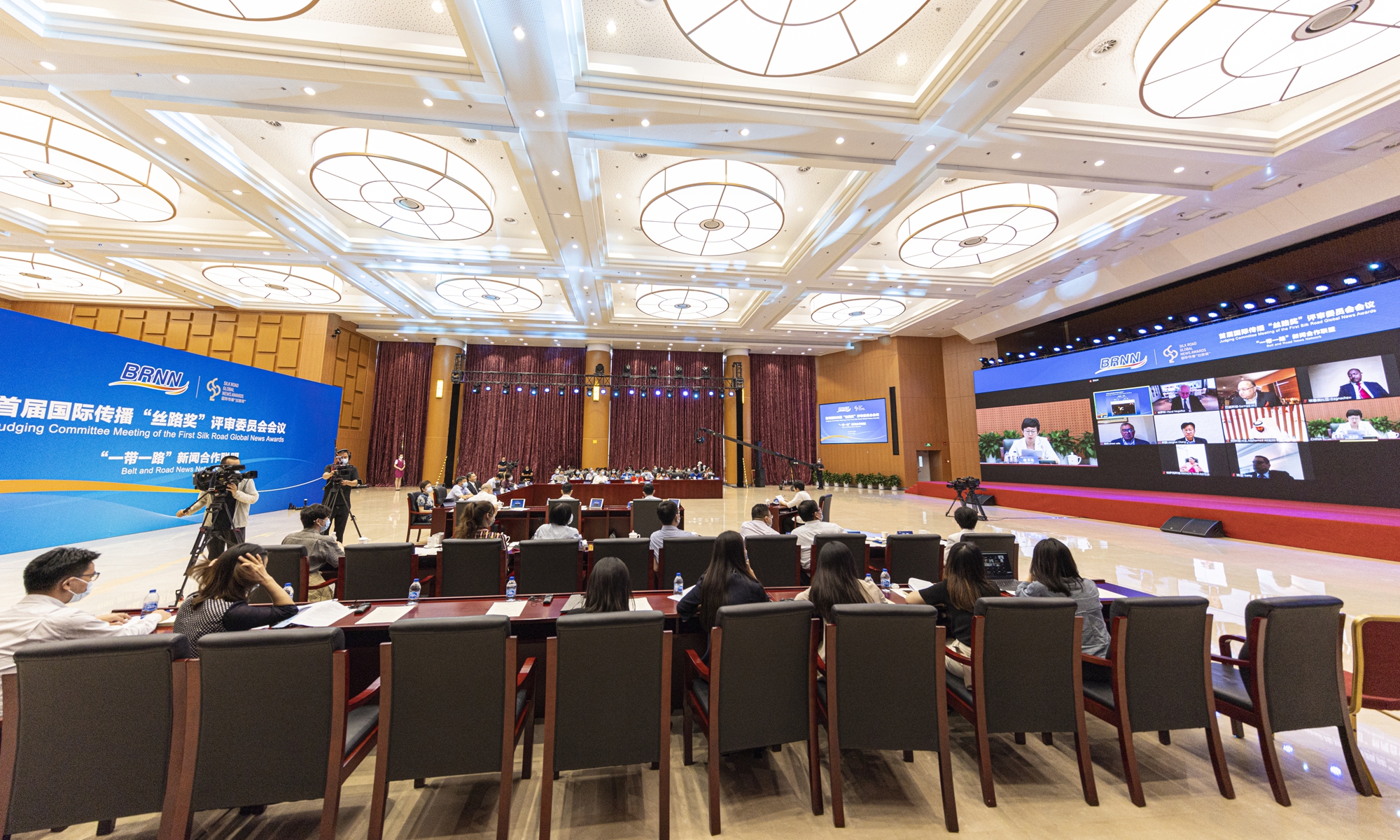 Among the works shortlisted for the Awards, there are many warm-hearted stories of support and dreams coming true.

A shortlisted video report shows doctors and nurses concentrating on their work and sweating under protective clothes. In the video, people from different regions and backgrounds helped each other through thick and thin protective suits, which is a vivid interpretation of the concept of community with a shared future for mankind.

Another video shows a panoramic picture of the China-Europe train crossing the continents. A driver was driving a freight train across Asia and Europe, carrying a wide range of goods to countries around the world. This is also a vivid epitome of the Belt and Road Initiative.

As of early June 2022, China has signed more than 200 cooperation documents with 149 countries and 32 international organizations under the Belt and Road Initiative. It has been fully proved that the BRI is an initiative for development, cooperation and openness.

At a time when unilateralism and protectionism are on the rise, building the BRI together has opened up new space for global economic growth and made an important contribution to improving the well-being of the world’s population, said Pavel Negoitsa, General Director of Russian newspaper Rossiyskaya Gazeta.

The BRNN has been doing a great job since its inception, and its importance has emerged a lot during the COVID-19 pandemic, and this is what news networks should be, to return the media to its role in awareness and educating citizens, said Samy El Kamhawy, Deputy Editor-in-Chief of Egypt’s Al-Ahram Newspaper.

At Wednesday’s meeting, Fang stressed to give full play to the advantages of the BRNN in multilingual and cross-platform communication. Cooperation could be deepened in video communication, joint interviews, program exchange so that the platform could develop bigger and wider.

At present, 213 media outlets in 99 countries have become BRNN members, and the BRNN’s website is now available in 10 languages, with an average of about 1,500 updated articles per month and more than 60,000 articles in total. Its influence continues to expand, and its broad representativeness, distinctive openness and pragmatic multilateralism are increasingly evident.