After a rough start to the year, electric vehicle (EV) stocks have rebounded nicely since the calendar flipped to July. With EV makers Tesla (TSLA 0.20%) and Rivian (RIVN -4.83%) down around 21% and 68%, respectively, year to date, but up 22% and 27% this month, investors may be wondering if it’s time to purchase some EV stocks.

If you’re a long-term believer in the EV transition, I believe now is a perfect time to hop into some EV-focused stocks. Here’s why.

EV supply chains are being established

Many consumers and companies have questioned whether the world can switch to an EV-based vehicle infrastructure due to battery component scarcity. However, on July 21, Ford (F -1.39%) eased some of these fears by announcing it has secured the raw materials necessary to produce 600,000 EVs annually by late 2023. Additionally, it has sourced 70% of the battery capacity necessary to support at least a 2-million-EV production rate by 2026.

While this announcement is specific to Ford, it shows how the material supply chains are being established to support this growing industry.

The microchip shortage is still raging, affecting all automakers. The lead time for the average microchip averaged 27 weeks in June, nearly double what it was in the five years before 2021. The demand for these chips isn’t going away, and companies like Texas Instruments are building new factories to ease the supply crunch. The chip shortage affects EVs more than gas-powered cars, as EVs typically utilize about the double number of chips traditional vehicles do.

This shortage is still a long-term problem, but when it is solved, expect EV makers to be able to run at full capacity, which will likely boost revenue and profits significantly.

How are EV makers doing?

Tesla recently reported its Q2 results, and despite COVID lockdowns and supply chain issues, it still posted great numbers. Total production rose 25% YOY (year over year), while its revenue exploded higher at a 42% clip due to higher vehicle prices. Additionally, its operating margin rose from 11% last year to 14.6% this year, although this does mark a decline from the 19.2% figure it posted in the first quarter.

The company also reiterated its annual projection of growing vehicle production rates by 50% “over a multi-year horizon.”

Newcomer Rivian is just beginning its production ramp, but it also gave investors good results. Management reiterated its 25,000-vehicle production goal for 2022 and produced 4,401 vehicles in Q2, up from the 2,553 produced in Q1. Additionally, Rivian began delivering Amazon‘s electric delivery van (EDV) recently, showcasing its ability to meet the demand of the 100,000 units Amazon wants to be delivered by 2030.

As for traditional vehicle makers like Ford, the switch to EVs is just beginning. In June, Ford produced and sold 4,353 EVs, up 76.6% YOY. Ford has a long way to go to meet its 600,000-EV goal by late 2023, but with its vast resources, it should have the means to get there.

Are EV stocks a buy?

Despite having a strong July, EV stocks are still well off their high. However, many deserve to be sold off from lofty valuation levels. Tesla still trades at 66 times forward earnings, much higher than Ford’s 6.7. While I don’t believe comparing these two companies directly is wise (due to different margin profiles and growth stages), it is worth noting that Tesla may see a lot of price volatility due to its valuation.

Still, I think Tesla is the top EV stock to own due to its future growth and market leadership. However, to invest wisely in Tesla’s stock, investors need to commit to holding it for three to five years; anything less won’t allow business results to drive the stock price. 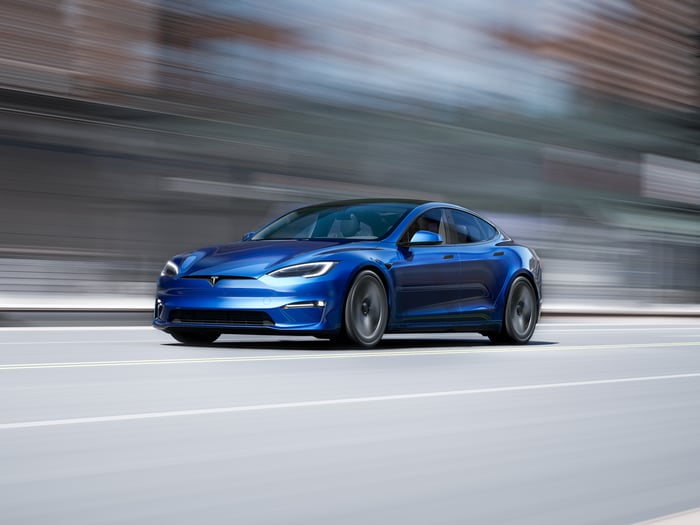 As for upstart Rivian, it is still too young for my liking. There are a lot of unknowns with production ramp-up, and the company is burning cash. So while I’m rooting for it to succeed, my investment dollars won’t be associated with the company.

I’m not a huge fan of traditional automakers, but I think there can be some value in them if they can smoothly transition to EVs without forsaking their current internal combustion engine (ICE) business. However, with Ford laying off 8,000 workers from its ICE business, I’m not sure this is the right balance.

EV stocks are OK to buy now if you understand the risk associated with each company. Additionally, the EV rollout will not be completed for some time, so investors must be willing to ride the waves of the market. However, I think holding this space is ripe with investing opportunities with the correct picks and period.