China’s manufacturing sector sprang back into life in June as the partial relaxation of COVID-19 containment measures helped drive the second-steepest monthly expansion of output seen for over a decade, according to PMI survey data produced by S&P Global for Caixin. The improved situation in June also helped boost exports, shorten supplier delivery times and took pressure off prices.

However, while the rebound in June bodes well for the immediate economic situation in mainland China and more broadly for the global economy via improved supply chains, there are a number of survey sub-indices which suggest that production growth could slow again in coming months as the initial rebound fades.

Manufacturing growth rebounded sharply in mainland China during June, according to the Caixin PMI survey, compiled by S&P Global. The survey’s output index surged 13 points compared to May’s reading, registering the largest rise in the 18-year history with the sole exception of the growth revival seen after the initial factory shutdowns at the start of the pandemic in March 2020.

The upturn in the index brings it to a level which signals the return of strong factory production growth after three months of severe declines. Since 2011, only November 2020 saw faster production growth than recorded by the latest June survey.

The resurgent growth follows the relaxation of some of China’s COVID-19 containment measures, which had been stepped up in response to the spread of the Omicron variant. Having been ratcheted up in April to the tightest yet seen during the pandemic, China’s COVID-fighting restrictions have since been relaxed to the loosest since February. 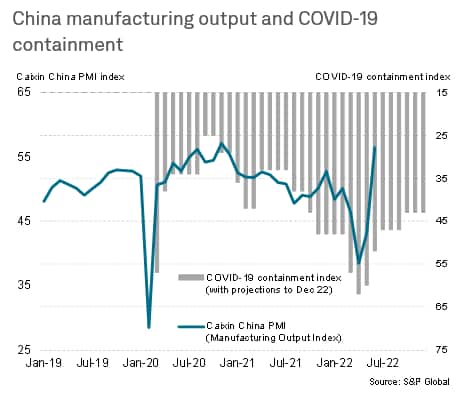 One immediate knock-on benefit of the looser COVID-19 containment measures and upturn in manufacturing performance was a shortening of supplier delivery times for mainland China. Although marginal, this shortening of lead times was the first improvement recorded since the end of 2018.

A corollary of the improving supply situation was a reduction in pricing power held by suppliers, which helped offset upward energy costs to keep producer input price inflation well below the peaks seen earlier in the pandemic. Average prices charged at the factory gate meanwhile fell, albeit only slightly, for a second successive month.

From a coming global perspective, the ramping up of production in China should also start to bear fruit in terms of global supply chains in months. 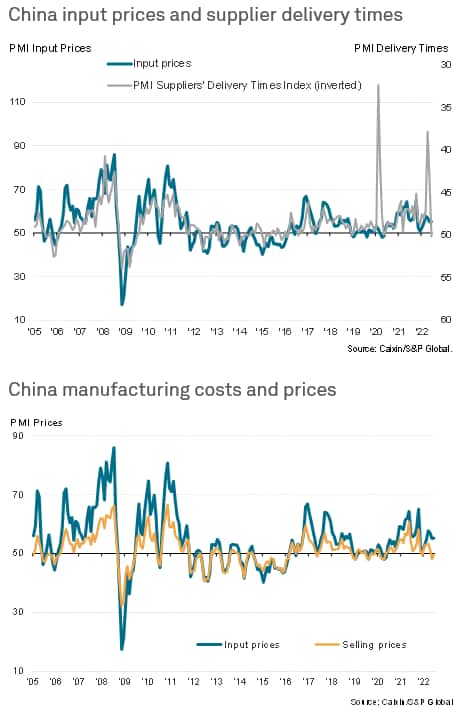 A further upside to the global economy from China’s return to growth was a jump in export volumes, with new export orders rising at the sharpest rate for over a year in June. However, it’s clear that overall demand growth remains relatively subdued once domestic orders are also taken into account, and is lagging that of production, to suggest that factory growth may remain modest after the initial reopenings after Omicron. 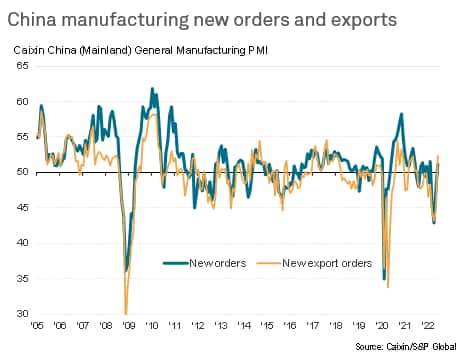 Two other demand-focused indicators suggest the need for some caution when assessing what might come next for China’s factory sector. First, backlogs of work fell in June, reflecting the outpacing of output relative to inflows of new orders, pointing to a reduced pipeline of orders to support production in coming months. Second, the survey’s new orders to inventory ratio – widely used as a reliable indicator of near-term production trends – remained relatively subdued in June. Although rising to the highest since February, this ratio is by no means indicating strong production growth in coming months. 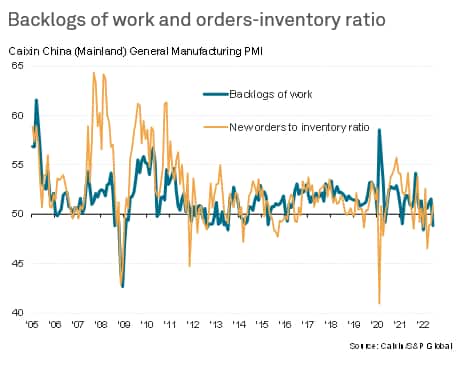 Finally, it is also worth noting that, while the partial reopening of the economy helped lift business expectations of future output in June, the overall degree of optimism remains below the survey’s long-run average. Thus, the PMI’s gauge of firms’ optimism also suggests that the June surge in production growth could fail to be sustained in coming months. 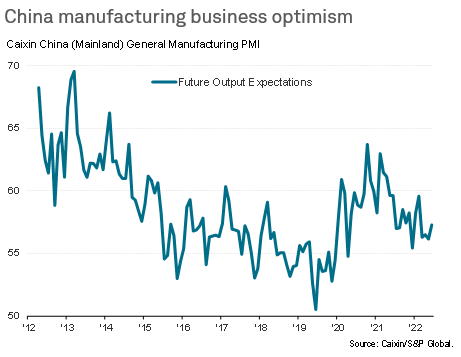 This subdued level of confidence in part reflects China’s ongoing battle with COVID-19. As our chart above illustrates, while further progress in opening up the economy is anticipated in July, the overall degree of COVID-19 containment looks set to remain far more severe than in others for the foreseeable future, reflecting China’s zero-COVID policy, which will inevitably serve as a continuing dampener on demand and economic activity.

© 2022, IHS Markit Inc. All rights reserved. Reproduction in whole or in part without permission is prohibited.

Pursing Managers’ Index™ (PMI™) data are compiled by IHS Markit for more than 40 worldwide. The monthly data are derived from surveys of senior executives at private sector companies, and are available only via subscription. The PMI dataset features a headline number, which indicates the overall health of an economy, and sub-indices, which provide insights into other key economic drivers such as GDP, inflation, exports, capacity employment, employment and inventors. The PMI data are used by financial corporate professionals to better understand where incomes and markets are headed, and to opportunities.