COMMENTARY | When representatives from Johnson & Johnson Vision visited the Jacksonville Job Corps Center two years ago, nobody on the tour could have imagined it would be the start of changing lives.

But that’s exactly what happened when the global lens manufacturer decided to invest $200,000 in a training room for manufacturing technology at the center.

Job Corps is a career and technical training program for students 16 to 24 years old. And the global headquarters for Johnson and Johnson Vision is right here in Jacksonville, the maker of ACUVUE, the world’s best-selling contact lens. The company’s contact lenses are available in more than 100 countries.

On the surface, it’s an unusual match for sure. But when you think about the future of manufacturing and the lack of interest in pursuing manufacturing careers it makes perfect sense.

Thanks to this new partnership the first three Job Corps participants graduated from the program in January and started working at the company in March.

“This company placed state-of-the-art equipment at our center and provided all the support necessary to make it successful,” said Joann Manning, business and community liaison at Job Corps. “It is the first of its kind in Job Corps and a major opportunity for kids coming out of challenging situations to have the opportunity to live a good life. I want to share this story with the world.”

While college degrees are important for advanced education and critical for certain careers, they aren’t the only path to finding meaningful work. And too often rising tuition costs can make them prohibitive for many.

Johnson & Johnson is a company that should be applauded for its efforts to create this program. It falls in line with a national push by manufacturing organizations to encourage more people to get into the industry.

US manufacturers need to fill 4.6 million jobs by 2028, according to the Manufacturing Institute and the National Association of Manufacturers. The two organizations launched the “Creators Wanted” campaign in efforts to build a modern manufacturing workforce of tomorrow.

By 2025, “Creators Wanted” aims to reduce the skills gap in the United States by 600,000 and increase the number of students enrolling in technical and vocational schools. A big part of the challenge though efforts are made to change the perception of the industry among parents and educators.

Even though there have been big gains in technical manufacturing, public awareness lags about pandemic opportunities in the industry, despite the raising awareness about the importance of manufacturing in our lives.

Peter Menziuso, worldwide president of Johnson & Johnson Vision, Vision Care, said in a statement that developing and fostering talent is a core tenet of the company’s culture.

“This partnership with Job Corps is so important to continue to expand our talent pipeline by broadening exposure to career paths right here in our local Jacksonville community,” he said. a part of shaping this training program to support this next generation of talent.”

An opportunity to turn things around

Alex James, 27, said he never considered manufacturing as a possible career option until he heard about the new program. Formerly of Pensacola, James said he had worked at several odd jobs, primarily in retail and restaurants, before he discovered Job Corps at age 24. At one point he even for Pensacola’s ABA professional basketball team.

He found Job Corps after he was kicked out of his mother’s home he said because he was at a point where they both agreed he wasn’t living up to his potential. James had earned an HVAC certification at Job Corps with plans to go into the heating and cooling industry when he was approached to consider participating in the new advanced manufacturing program.

Now he’s a process technician at Johnson & Johnson, making $19 an hour as well as a 12% night shift differential in pay. The job, which includes full benefits, includes diagnosing problems with machines and doing audits and inspections.

“There’s a lot that goes into it. You have to be fast and precise, which leads to efficiencies,” he said. “It’s a challenge but I’ve always been up for a challenge… This program really brings out the best version of you.” 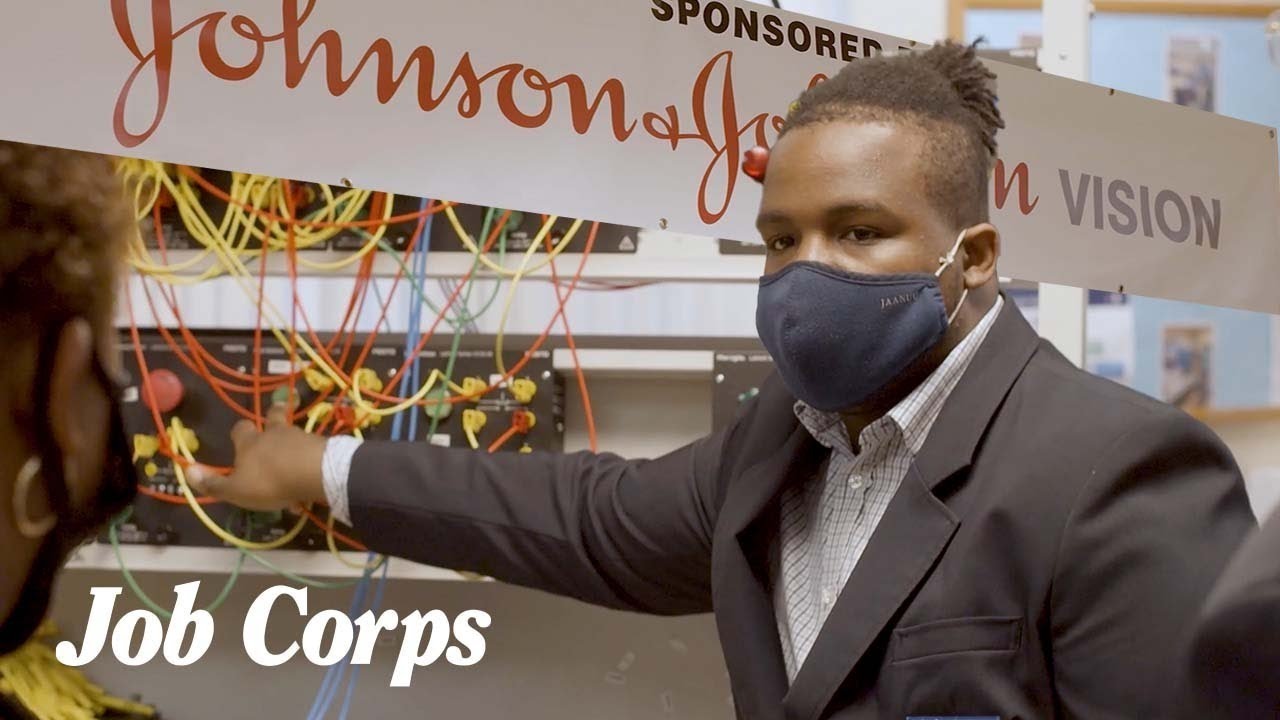 James said while he never saw himself working in advanced manufacturing, he now sees a bright future with the potential for upward mobility.

“Now I definitely have plans to retire at J & J. I feel like this is God’s plan for me,” he said.

James and the other two recent graduates, Keyonte Mobley and Richard Doyle, are among the first graduates, but recruitment is constant. Due to the pandemic, there are about 120 students at Job Corps in Jacksonville. Generally, there’s about 300 people — male and female — at the center in Jacksonville. Some live there and some take classes in 10 trades.

This program is a welcome addition to the city’s business community. Marketing opportunities through this new partnership is a big step toward changing perceptions about advanced manufacturing.