With retail sales slowing across the United States, the National Retail Federate is forecasting the imports into the US’s major container ports will plateau and decline slightly in the second half of the year with the potential for a deepening decline early in 2023. However, with retailers having brought merchandise in earlier this year and the overall strength in the first half of 2022, the retail trade association projects that total 2022 container imports will be ahead of 2021.

“The heady days of growth in imports are quickly receding,” said Ben Hackett, founder of Hackett Associates which assembles the monthly report for the NRF. “The outlook is for a decline in volumes compared with 2021 over the next few months, and the decline is expected to deepen in 2023.”

According to the monthly update for the Global Port Tracker, the NRF reports that imports at the US’s major container ports were up 5.5 percent in the first half of 2022 to a total of 13.5 million TEU. June was the sixth straight month in 2022 showing year-over-year increases. While June imports were up nearly 5 percent over 2021, they were down nearly 6 percent from a record high of 2.4 million TEU in May 2022. 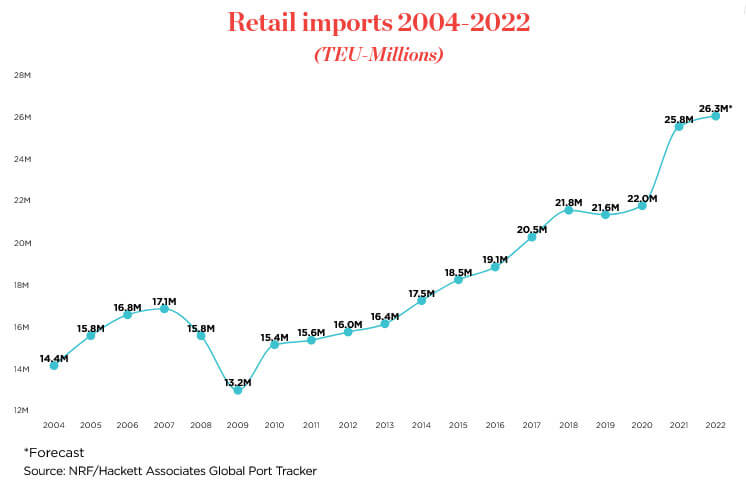 The NRF projects that when the final numbers are tallied for July that it will be the last month of year-over-year gains for 2022. They are projecting a 3.2 percent gain for July to 2.26 million TEU. The gains in the first half of 2022 came while China experienced disruptions including more than a month of lockdowns in and around Shanghai. In addition, the Port of Oakland was shut down for several days in July amid protests by independent truckers over a new state law that makes it harder to be independent owner-operators in California.

“Retail sales are still growing, but the economy is slowing down and that is reflected in cargo imports,” said Jonathan Gold, the NRF’s Vice President for Supply Chain and Customs Policy.

Also contributing to a potential slowing of retail imports in the traditionally busy third and fourth quarter, the NRF believes “many retailers brought in cargo early and shifted to East and Gulf Coast ports to avoid any potential disruptions related to contract negotiations,” referencing the ongoing contract negotiations West Coast longshore contract negotiations. According to the NRF, these earlier than usual shipments helped drive second-quarter volumes shifting some volumes that would otherwise have come in during the second half of the year.

For all of 2022, the NRF is now projecting that retail imports at the container ports will still be 2 percent above 2021’s record of 25.8 million TEU. They are calling for total imports for the year to reach 26.3 million TEU.

Despite concerns about the economy and recent spikes in the price of gasoline and inflation, the NRF continues to forecast that 2022 retail sales will grow between 6 percent and 8 percent over 2021. Retail sales were up 7 percent during the first half of the year.

The forecast calls for a plateauing of imports starting in August. The NRF forecasts the declines in monthly retail import volumes will range from flat to down as much as nearly 4 percent versus last year. The strongest declines are forecast for August, October, and December.

The NRF also points to continuing concerns over the ongoing labor disputes. The longshore contract for the US West Coast ports expired on July 1. Similarly, the freight railroads and their union are now working with a Presidential Emergency Board to resolve their contract discussions, which have been ongoing for two years.