• Three civilians, including a boy, were wounded in overnight shelling of Marhanets, a town opposite the Russian-held Zaporizhzhia nuclear plantValentyn Reznichenko, governor of the Dnipropetrovsk region, said in the latest in a string of similar reports.

• Rafael Grossi, the head of the UN nuclear watchdog tells the Security Council that fighting near Ukraine’s Zaporizhzhia nuclear plant has sparked a “grave crisis”, after Kyiv and Moscow again accuse each other of shelling near the site. “This is a serious hour, a grave hour and the IAEA (International Atomic Energy Agency) must be allowed to conduct its mission to Zaporizhzhia as soon as possible,” Grossi said. READ MORE BELOW

• Ukraine’s General Staff reported widespread shelling and air attacks by Russian forces on scores of towns and military basesespecially in the east where Russia is trying to expand territory held on behalf of separatist proxies.

• Ukraine’s security agencies issued a joint statement calling for the United Nations and the International Committee of the Red Cross to send representatives to locations where Russia is holding Ukrainian POWs.

• The first UN-chartered vessel set to transport grain from Ukraine under a deal to relieve a global food crisis should dock in Ukraine on Friday, the United Nations said. The MV Brave Commander, which left Istanbul on Wednesday, is due to arrive in Yuzhne, east of Odessa on the Black Sea coast, the UN’s World Food Program said.

• Czechia, which holds the rotating EU presidency, says that a blanket ban on visas for all Russian travelers could be the bloc’s next sanction on Moscow. READ MORE BELOW

• Germany will limit heating in public buildings over the winter to save on gas as Russia throttles supplies to Europe, Economy Minister Robert Habeck said. “Public properties – with the exception of hospitals and other parts of the social system, of course – will only be heated to 19 degrees Celsius,” Habeck told Sueddeutsche Zeitung.

• India said there was no pressure on it from Western countries or anywhere else about its energy purchases from Russiaas Indian firms step up imports of oil and coal from the country shunned by some governments for its military campaign in Ukraine.

• A European bank has agreed to process a payment for the transit of Russian oil through UkraineSlovak refiner Slovnaft and another source familiar with the matter said, removing the cause of a stoppage of oil supplies to central Europe last week.

• The European Space Agency has started preliminary technical discussions with Elon Musk’s SpaceX that could lead to the temporary use of its launchers after the Ukraine conflict blocked Western access to Russia’s Soyuz rockets. 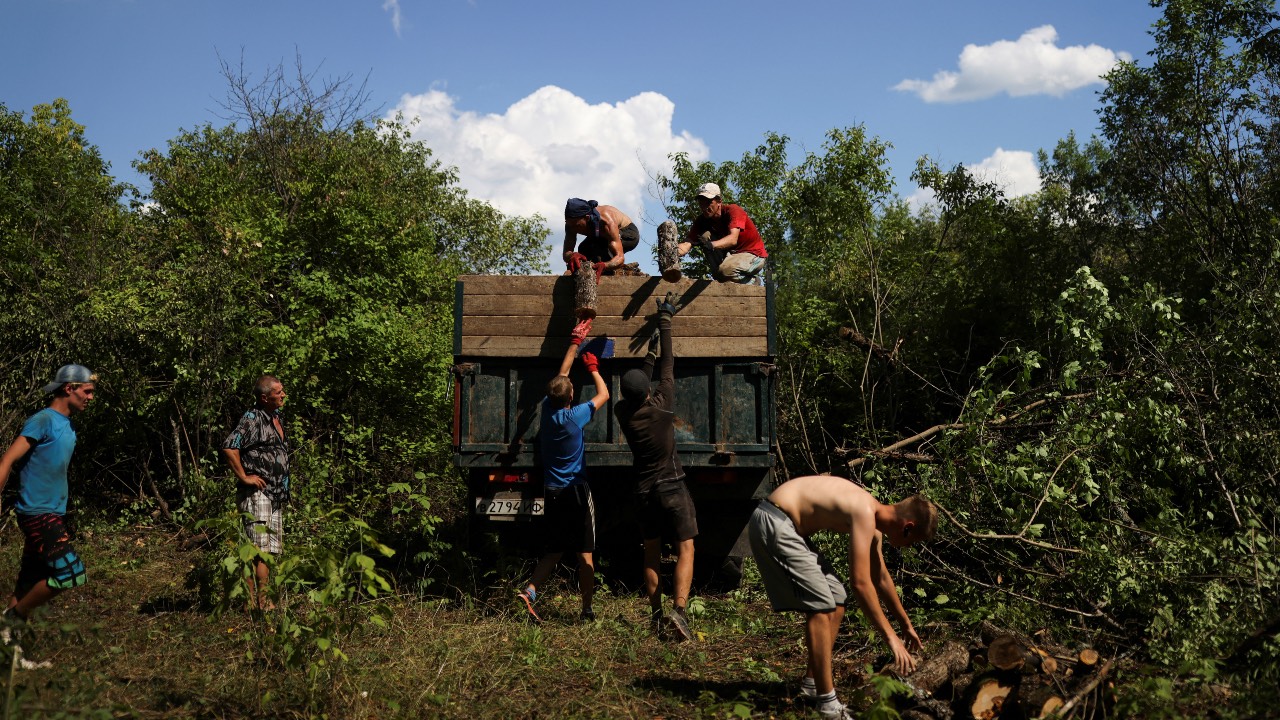 Young people load wood into a truck, for winter cooking and heating, in the small village of Malaya Rohan in the Kharkiv region. /Nacho Doce/Reuters

Young people load wood into a truck, for winter cooking and heating, in the small village of Malaya Rohan in the Kharkiv region. /Nacho Doce/Reuters

Czechia, which holds the rotating EU presidency, said a blanket ban on visas for all Russian travelers could be the bloc’s next sanction on Moscow.

“The flat halting of Russian visas by all EU member states could be another very effective sanction,” Czech Foreign Minister Jan Lipavsky said in a statement.

Lipavsky said the move would send “a very clear and straightforward signal to the Russian society.”

It will show that “the Western world does not tolerate the Russian regime’s aggression and hateful rhetoric aimed at free, democratic countries that pose no threat to Russia,” he added.

He said he would propose the idea at an informal meeting of EU foreign ministers in Prague at the end of August.

“In a time of Russian aggression, which the Kremlin keeps on escalating, there cannot be talks about common tourism for Russian citizens,” Lipavsky said.

The EU has so far come up with six sanction packages against Russia but Ukrainian President Volodymyr Zelenskyy, in an interview with the Washington Post this week, called on the West to ban all Russian travelers. He said Russians should “live in their own world until they change their philosophy.”

Czechia stopped issuing visas for ordinary Russians on February 25, a day after Russia started its offensive in Ukraine. But Russian tourists are still flowing into Europe through Finland. Once they enter the visa-free Schengen zone, the Russians are free to travel across most of Europe.

“Visiting Europe is a privilege, not a human right,” Kallas tweeted. 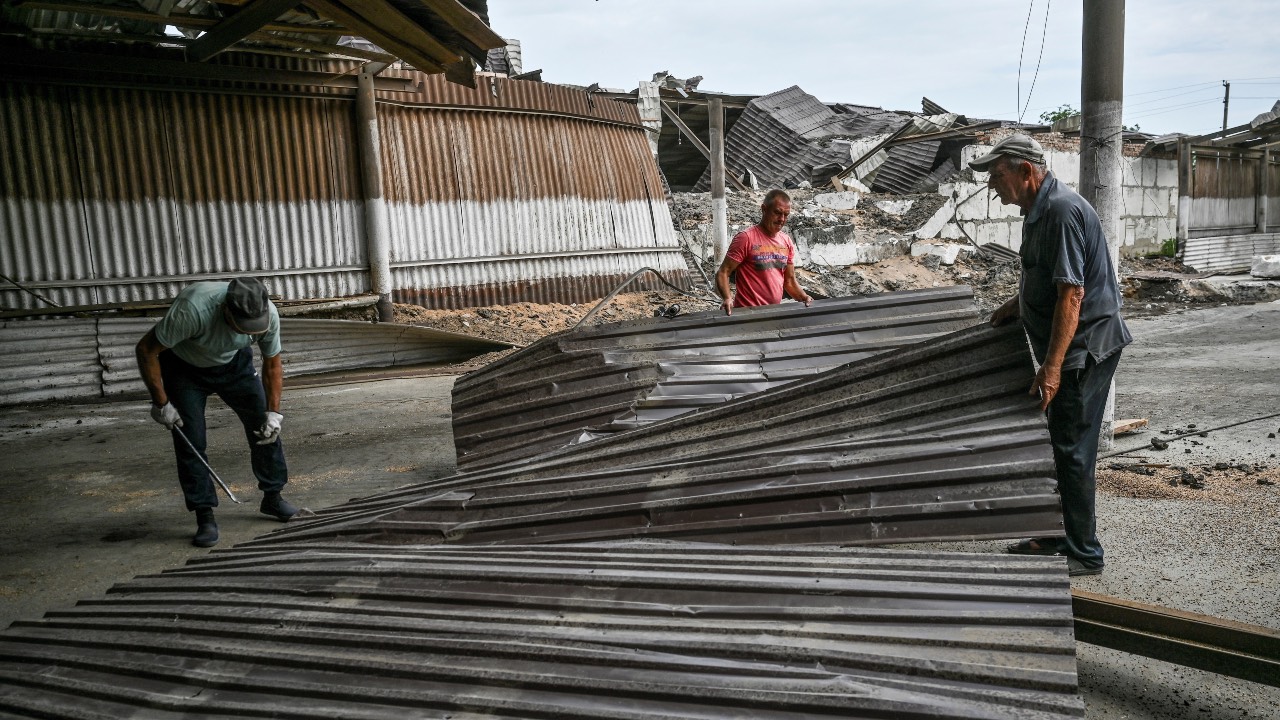 The head of the UN nuclear watchdog warned an emergency Security Council meeting of the “grave” crisis unfolding at the Zaporizhzhia nuclear power plant in Ukraine, as Moscow and Kyiv traded accusations of new shelling near the facility.

“This is a serious hour, a grave hour,” Rafael Grossi, chief of the International Atomic Energy Agency (IAEA), told the Security Council, adding that the IAEA must urgently be allowed to conduct a mission to Zaporizhzhia.

The US supports calls by the United Nations and others to establish a demilitarized zone around the plant.

Meanwhile, Ukrainian President Volodymyr Zelenskyy accused Moscow of “nuclear blackmail” as he urged the international community “to react immediately to chase out the occupiers from Zaporizhzhia.”

“Only the Russians’ full withdrawal… would guarantee nuclear safety for all of Europe,” Zelenskyy said in a video address to the nation.

Moscow and Kyiv charged each other of new shelling near the Zaporizhzhia nuclear power plant, a dangerous escalation five months into the conflict.

Both sides said there were five rocket strikes near a radioactive material storage area at the plant, Europe’s biggest nuclear facility which has been a focus of renewed fighting in recent days.

Ukraine’s nuclear agency Energoatom said later there had been fresh Russian shelling near one of the plant’s six reactors that had caused “extensive smoke” and “several radiation sensors are damaged”.

Vladimir Rogov, a member of the Moscow-installed regional administration, said Ukrainian forces had “once again struck” the plant.

The Ukrainian plant is under the control of Russian troops, and Ukraine has accused Moscow of basing hundreds of soldiers and storing arms there.

Both the Russians and Ukrainians say radiation levels at the plant were normal.