Traffic in Vancouver got you down? Is the Seawall packed with too many pedestrians and cyclists today? Maybe you need to get off the beaten track and onto a steel one.

Good thing that the city and neighboring areas are home to a number of classic train rides and railways you can visit this season and year-round. Plan a visit and soon you and your family will be shouting, “All aboard!”

From heritage rail lines to amusement park rides and underground train tours, here are 10 terrific trains you can ride this summer in and around Metro Vancouver.

The Stanley Park Miniature Train is a beloved activity for locals and tourists, with over 200,000 visitors riding the 20 gauge, 2 km track each year. The railway’s locomotives feature an impressive locally built replica of Canadian Pacific Railway Engine #374, which is “famous for pulling Canada’s first transcontinental passenger train into Vancouver in the late 1880s.”

During the spring and summer, guests can ride the Urban Forest Train. Drop by in October to board the Ghost Train. Then in December, celebrate the holidays with Bright Nights at Stanley Park.

Honeybee Express and Kettle Creek Mine Coaster at Playland 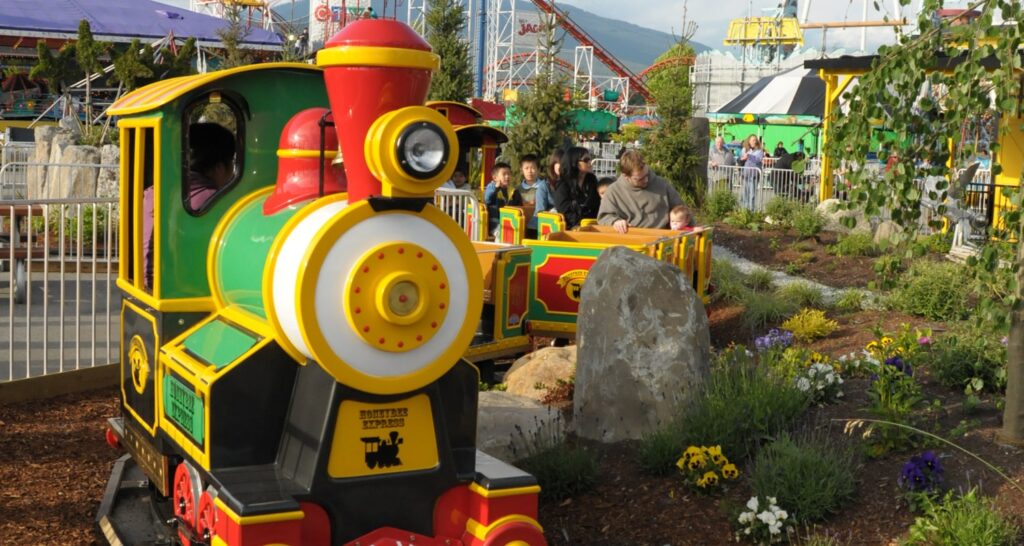 PNE Fair is just days away from opening for its 2022 season, and train aficionados of all ages will want to head to Playland to ride its two railway offerings.

Honeybee Express is a journey through an enchanted forest and other west coast natural wonders, while Kettle Creek Mine Coaster is a runaway mine train complete with rough and rugged terrain. Make sure to wave if you see KC, Playland’s lovable mascot. 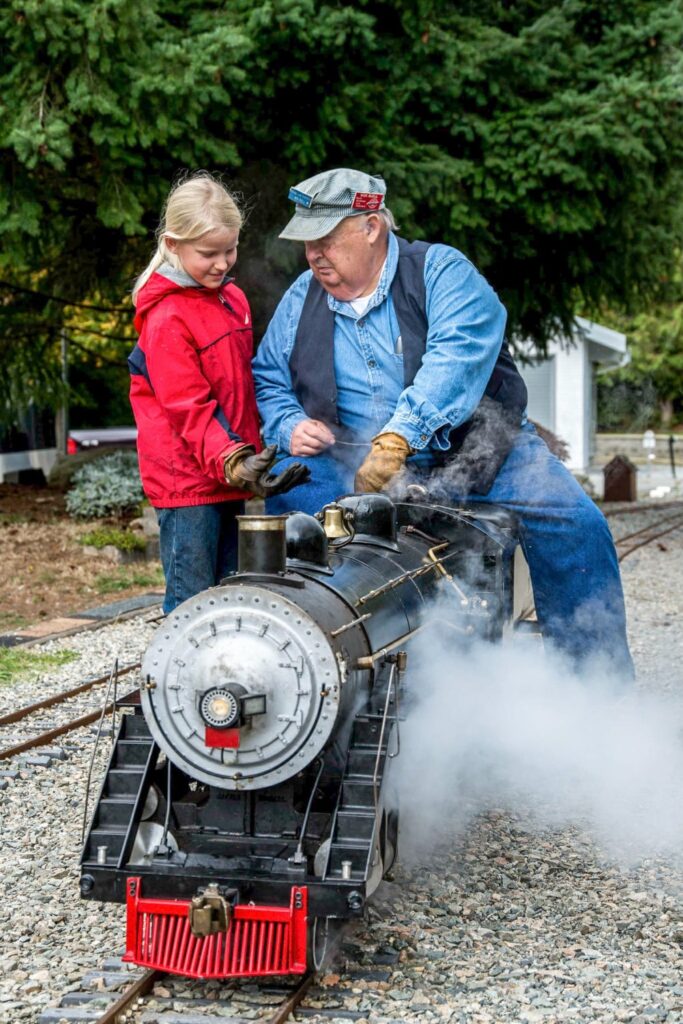 Burnaby Central Railway was built and is operated by the British Columbia Society of Model Engineers. Children of all ages can ride around the over three km or track on trains pulled by mini steam, diesel or electric locomotives. Your ride will even take you across tunnels, bridges and viaducts. While you’re there, stop by the ever-growing Garden Railway. 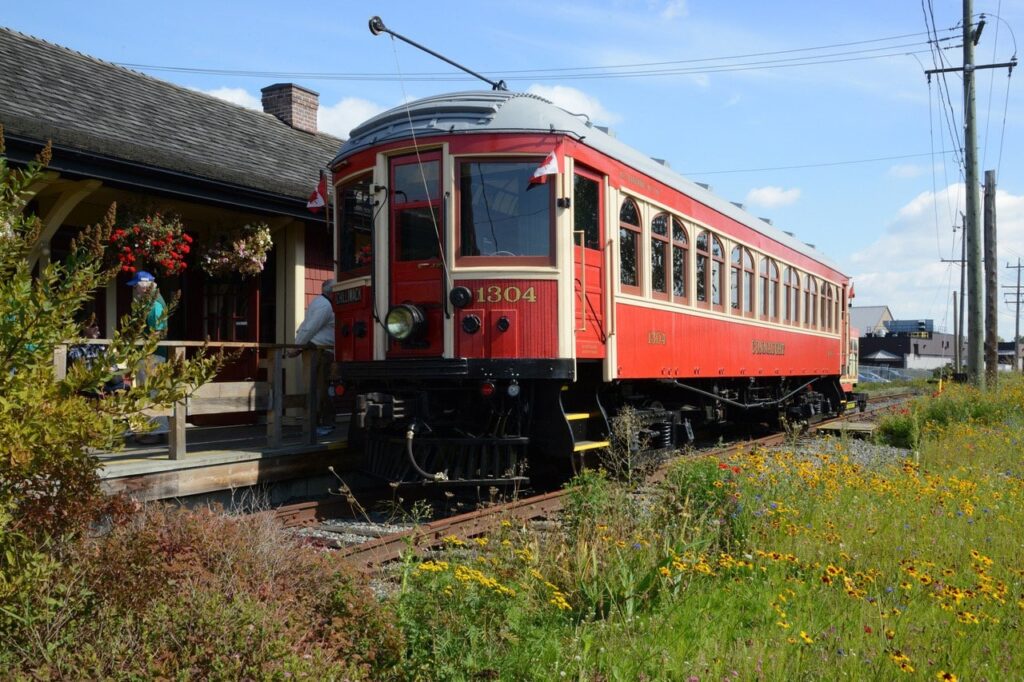 Take a trip back through time by riding Surrey’s Heritage Interurban rail car. The 50-minute trip goes from Cloverdale to Sullivan Station and back on the British Columbia Electric Railway. Passengers will ride in Car 1225 on most weekends, though there are special train runs each month such as trips on the famous Connaught Car.

Guests can also go on a behind-the-scenes guided tour of the Discovery Center and discover the history of the Interurban as it used to travel throughout Vancouver and the Fraser Valley. 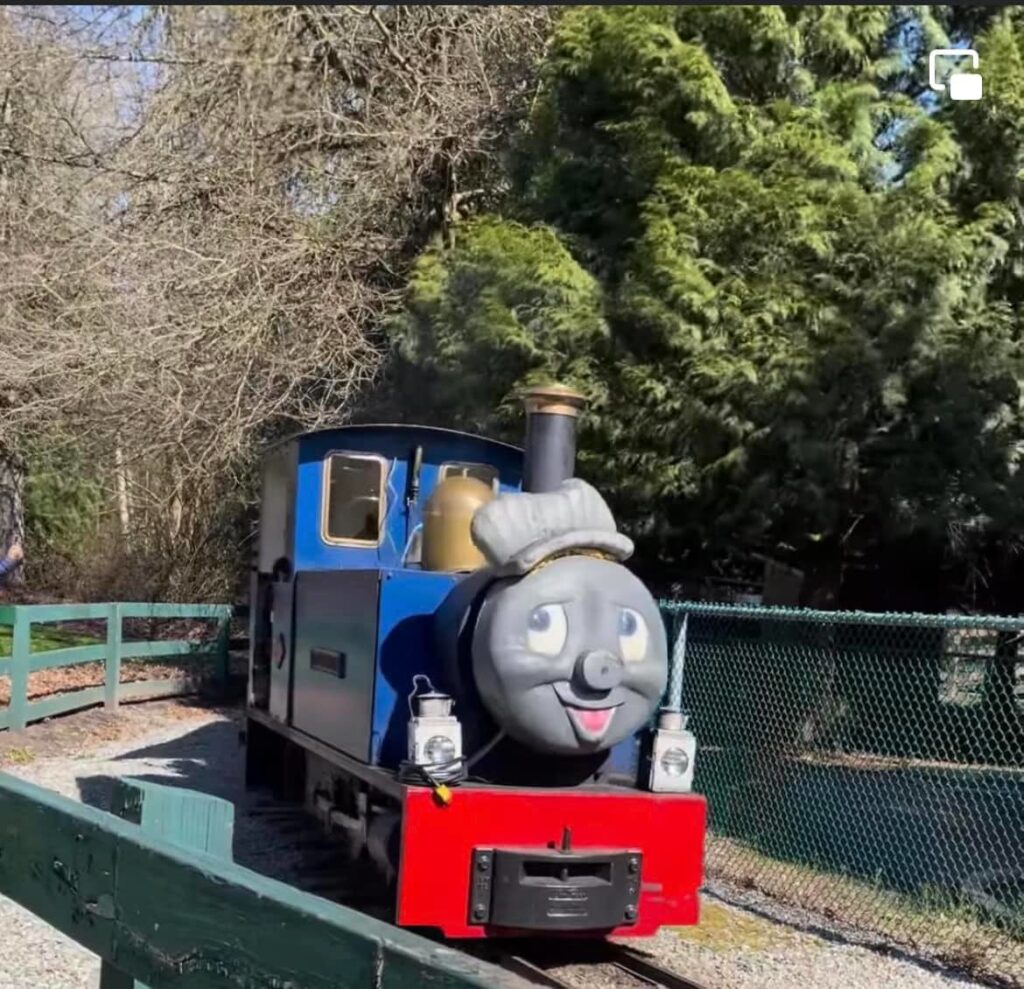 Eddy The Engine has been delighting passengers of all ages at Bear Creek Park since 1996. The English mining diesel pulls open coaches on a 10-minute ride during the summer, with a themed tunnel display, natural forest, the Bear Creek Gardens, and a bridge part of the adventure.

Visitors will want to come back during Halloween for The Scream Train and also over the holidays for Santa Express and Christmas Night Train special events. And yes, don’t forget to get in a round of mini golf! 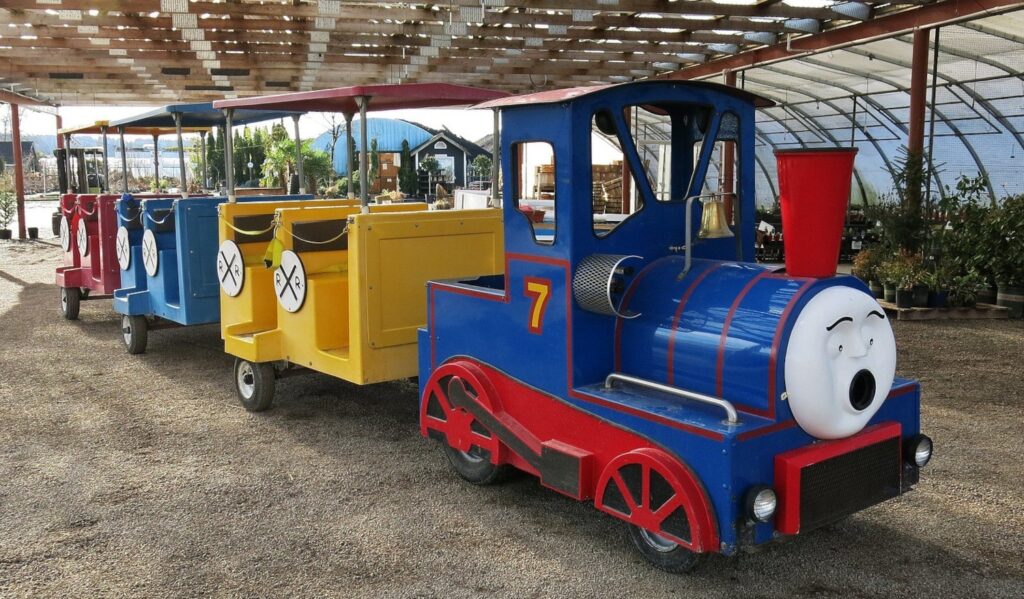 Art Knapp Garden Center in South Surrey is not just a great place to find perennials, trees, herbs and supplies, but it’s also home to a fun train ride! Drop by the Family Fun Zone to climb aboard the familiar-looking tank engine and trek around the huge site. There’s also an 18-hole mini golf course and a candy shoppe to complete the day out. 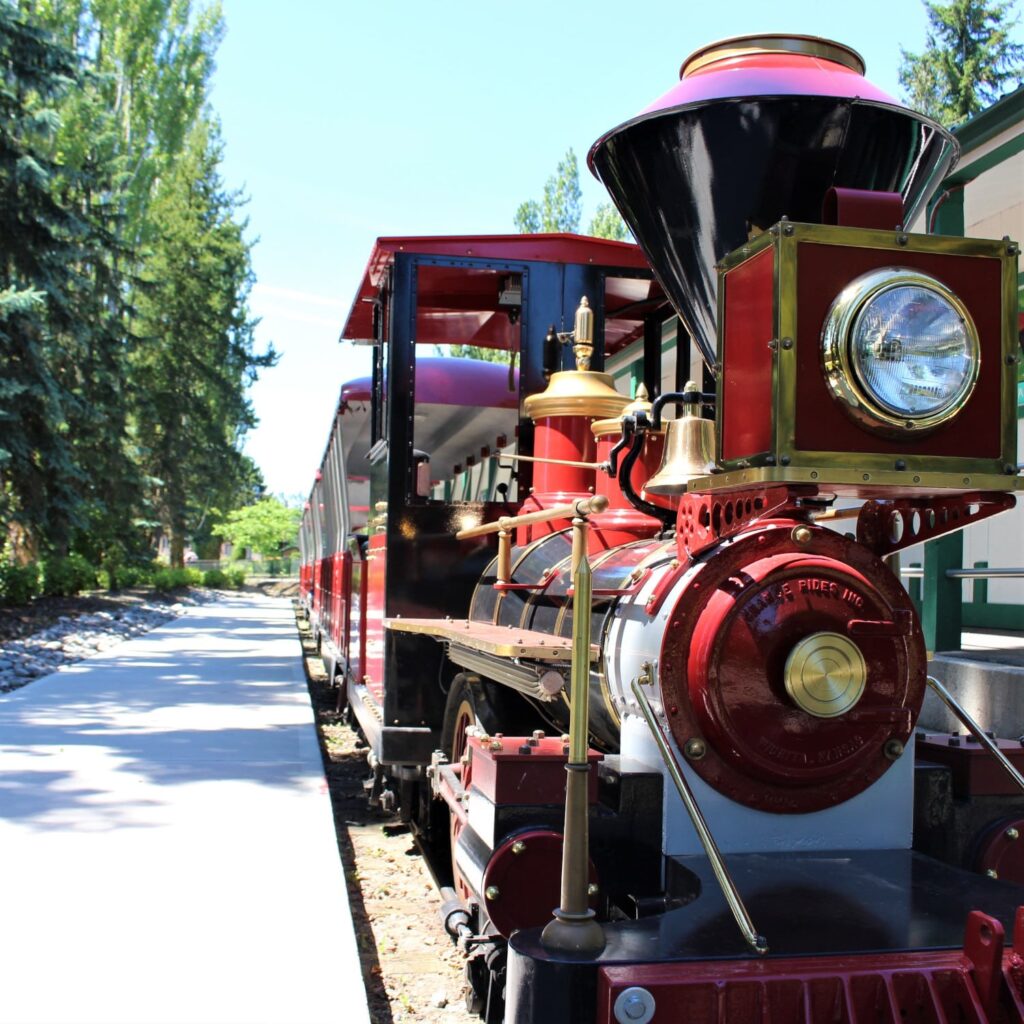 The Safari Express Miniature Train takes visitors to various sections of the 120-acre zoo before returning to the station. The train was refurbished in 2018 by Industrial Engine, Alder Steel, and Burrard Inlet Rail. 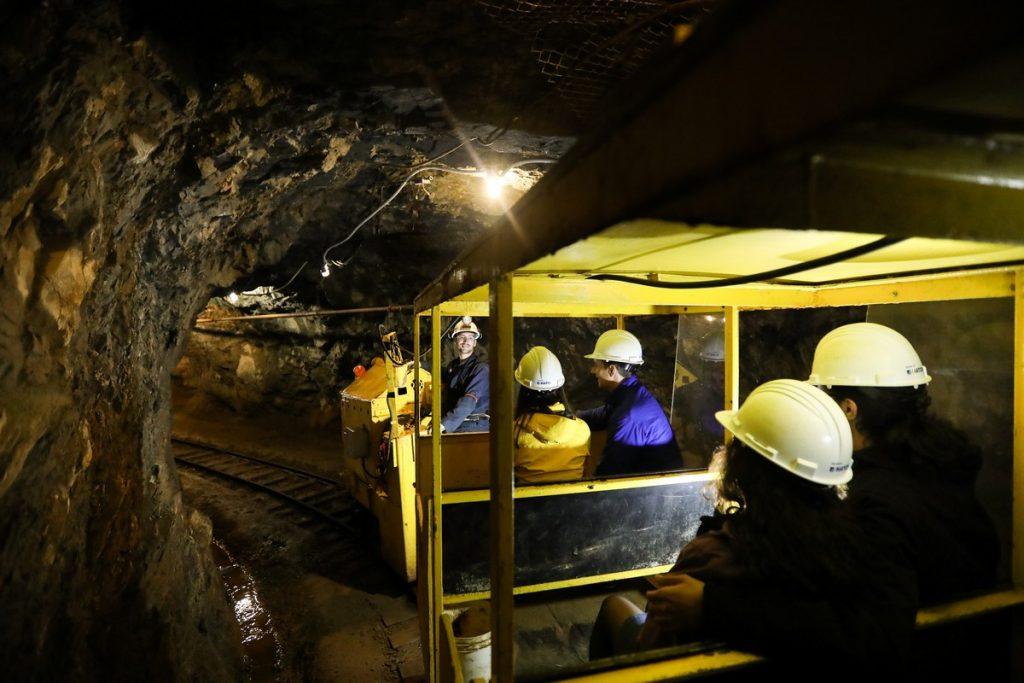 The Britannia Mine Museum is a hub of activities for all ages and interests on the scenic Sea to Sky Highway and provides an authentic and unique look at British Columbia’s rich mining history.

Visitors can also enjoy a truly Canadian experience in The Underground, where you will board an underground train and ride into an authentic mining tunnel. While inside, experience live mining machinery demonstrations and discover what life for a miner was really like in the 1920s, including a taste of total darkness. 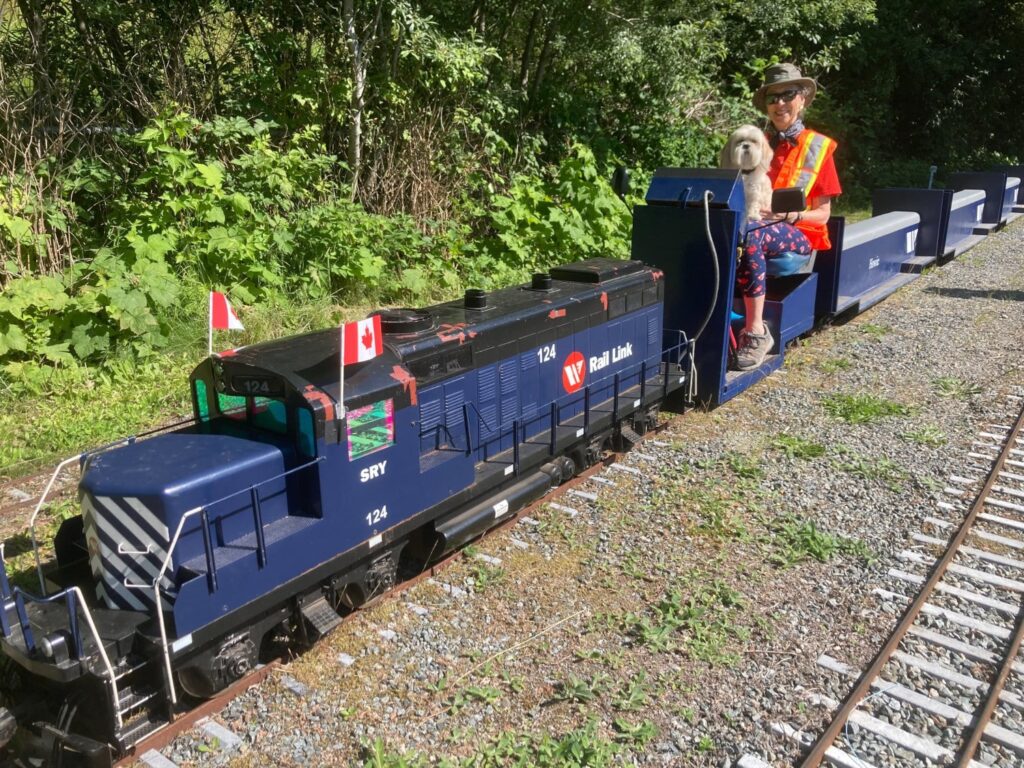 The Railway Museum of BC in Squamish is where you can get up close and personal with trains, locomotives and equipment from the province and Canada’s history. It’s also where you can enjoy unlimited rides on the mini-rail train, track speeders and the massive BC-21 Budd Rail Diesel car.

Guests are also invited to visit the Royal Hudson 2860 inside the Roundhouse, see the new exhibits for 2022, check out the General Store and Fire Trucks in the PGE Firehall, and more.