The new Mississippi River cruise ship being built for Viking was floated out today at Edison Chouest Offshore’s LaShip shipyard in Houma, Louisiana. The vessel marks the latest expansion of the well-known European river cruise company into the North American market following its entry into ocean cruising and most recently expedition cruising. The new 386 passenger vessel is due to enter service in June 2022 sailing on the Mississippi between New Orleans and St. Paul, Minnesota.

the cruise company, headed by Torstein Hagen, has been planning its entry into the US river cruise market for years. The company will market the ship, but to meet American regulations it will be owned by a limited liability company set up by Edison Chouest. Viking can have no ownership interest in the vessel to meet US cabotage restrictions.

The vessel was specially designed for the Mississippi drawing on the well-known features of the company’s river and ocean cruise ship while adding features unique to its operations on the Mississippi. Named Viking Mississippi, the vessel measures 450 feet in length and is 75 feet wide with a total of five decks. Viking is calling it the largest and most modern cruise ship operating in the region.

Passenger accommodations include a total of 193 outside staterooms ranging from 268 square feet to 1,024 square feet, including suites with wraparound private verandas. Other amenities include a two-story lounge near the bow of the vessel surrounded by glass and an outdoor seating area. In addition to a main lounge and dining room, there will be alternative dining, including indoor-outdoor casual spaces. There is also a sun terrace with an infinity plunge pool and a 360-degree promenade deck. 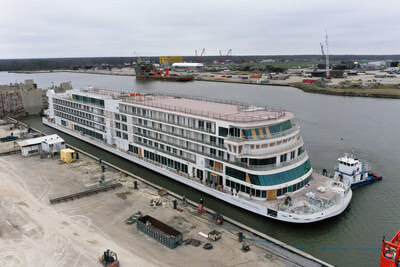 the Viking Mississippi is equipped with a variety of measures to maximize energy efficiency and emissions, including a diesel-electric propulsion system comprised of eight CAT C32 EPA Tier 4 diesel engines, each powering a 940 eKw water cooled generator. Each engine/generator unit is individually mounted on a specially designed double raft isolation system that produces a quiet and smooth ride. Propulsion power is provided by Voith 6 blade propulsion thrusters driven by permanent magnet electric motors. The vessel also is equipped with pump jet bow thrusters powered by permanent magnet motors and an exhaust scrubbing system that reduces sound and emissions.

“It is a proud moment that this new ship has met an American waterway for the first time,” said Torstein Hagen, Chairman of Viking. “Our guests have long wanted to sail the Mississippi River with Viking, and we very much look forward to welcoming them on board this summer. We are grateful to our American partner, Edison Chouest Offshore, who has helped bring to life our vision of exploring the Mississippi in the ‘Viking way.'”

The traditional float out marked the first time the ship touched the water and is moving into its final stage of construction. The ship’s ceremonial godmother, Dionne Chouest, General Counsel of Edison Chouest Offshore, attended the float out.

The maiden voyage of the new ship is due to sail from New Orleans on June 25 to Memphis, Tennessee. The vessel is to make port calls in seven US states, including Louisiana, Mississippi, Tennessee, Iowa, Wisconsin, and Minnesota during its inaugural season. 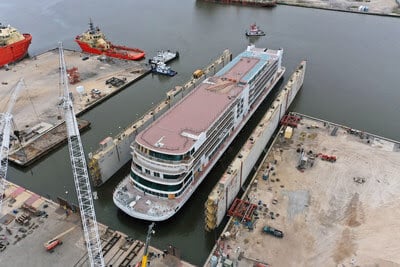 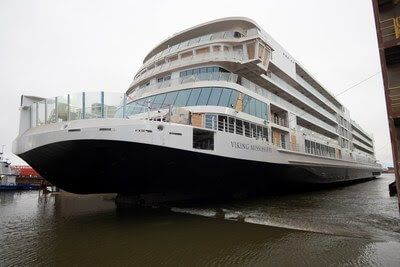