The pandemic obviously had a major detrimental impact on tourism around the world, and recently released data shows just how hard BC’s wine industry was hit.

According to a recent report from Wine Growers British Columbia, tourism revenue from the BC’s wine industry dropped 68.7% from 2019 to 2020.

The COVID-19 pandemic effectively shut down the world’s tourism industry in March 2020, and within BC, travel restrictions effectively prevented residents from the Lower Mainland and the rest of the world from traveling to the Okanagan’s wine region in particular.

“That tourism piece is really what got diminished as a result of COVID-19,” said report author Dr. Robert Eyler, president of Economic Forensics and Analytics.

“The ripple effects from a lack of tourism feeds into the wine industry and related industries. With most economists predicting that global tourism will not return to 2019 numbers until 2024/25, the wine industry needs to approach tourism differently to bridge the gap.”

And it appears that more recently, the industry has yet to bounce back to pre-pandemic levels.

“In our wine shop we have observed a noticeable lack of out-of-province guests, which while not overly surprising that those coming from overseas would be fewer, we had expected US and Albertan tourists to return, which just hasn’t happened, said Erin Korpisto, general manager of Okanagan Falls’ Stag’s Hollow Winery.

Wine Growers British Columbia is calling on more collaboration with the government to help bring back the momentum the industry had pre-pandemic. The organization says the BC wine and grape economy contributed $3.75 billion to BC’s economy in 2019, an 86.7% increase from 2011.

“These findings show that for the BC wine economy to re-capture the momentum and potential of its pre-pandemic growth, especially as it relates to tourism, strategic collaboration between government and industry will be required,” said Miles Prodan, president & CEO of Wine Growers British Columbia.

“Our industry has proven its adaptability over the few years of global restrictions on tourism and other challenges including supply chain issues, labor shortages, and extreme weather events.

“The growth from 2011 to 2019 shows that the BC wine and grape industry is a significant driver of the provincial economy which needs to be advocated for as we embark on the coming years contending with continued shadow effects of the pandemic.”

Wine Growers British Columbia is working on a BC Wine Tourism Strategy that will lay out the industry’s path from 2023 to 2027.

To fully realize the economic benefits of wine tourism, we must continue making dedicated investments to propel the industry forward. We have a vision of long-term success,” said Prodan. 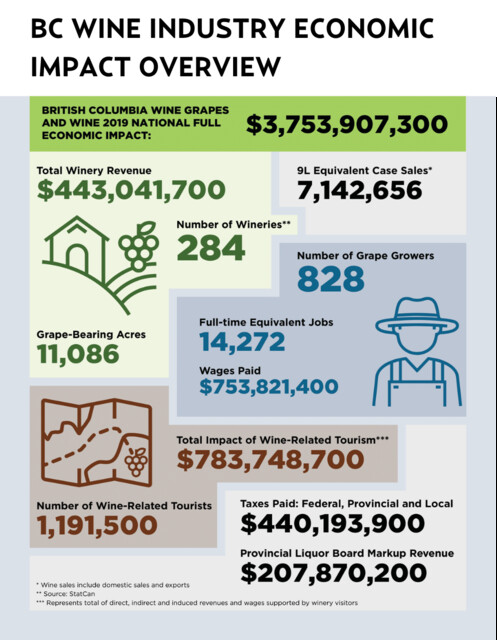