Ten successful University of Wisconsin Oshkosh graduates have been chosen to receive top honors for 2022 by the Alumni Association Board of Directors. Over the course of the summer, we will introduce you to these outstanding alumni.

Two UW Oshkosh alumni who have made an impact on countless individuals during their decades of work in education have earned special recognition from their alma mater.

Barb Herzog ’70 and ’75 MST, and Oscar Mireles ’96, have earned UW Oshkosh’s Distinguished Alumni Award. Herzog and Mireles are two of four alumni who’ll be recognized with this award for their professional accomplishments by the UWO Alumni Association at Homecoming this fall.

Herzog a lifetime leader in education

Herzog earned a bachelor’s degree in broadfield social science and history in education from UWO in 1970, kicking off a career of more than 40 years in public education.

Her own education didn’t stop there—she earned a master’s of science in teaching from UWO in 1975 and later a doctoral degree in educational administration and adult and continuing education from UW-Madison.

Her teaching career began as a junior high social studies teacher in Fond du Lac. During her time there, she earned her master’s degree and certifications as a reading teacher, reading specialist and principal. She became an assistant principal in the Neenah Joint School District and later curriculum director for the Oshkosh Area School District, where she oversaw the guidance and counseling, English as a second language, gifted and talented, library/media and teacher professional development programs.

By the time of her first retirement in 2008, she had worked nearly 21 years in Oshkosh schools under a variety of titles and with many different responsibilities. Besides curriculum director, she served as assistant superintendent of instruction and executive director of administration, a role which included supervision of all district principals.

She later served as a substitute principal for five years in Oshkosh. During that time she also worked in the Center for Additional Teaching Licenses in UWO’s College of Education and Human Services (COEHS). She retired from that role in 2019 to concentrate on board positions within the Oshkosh district, Cooperative Education Service Agencies (CESA) 6 and the Wisconsin Association of School Boards (WASB). This year she was chosen as president of the WASB, a statewide organization that includes all 421 public districts and 12 CESA districts.

“Dr. Herzog’s active involvement first in local educational issues and later in statewide educational issues and continual pursuit of innovative and visionary opportunities are among the most important reasons she has grown into a recognized school district champion and became such an extraordinary advocate for the students of Wisconsin,” wrote Josh Ashley, executive director of the Wisconsin Association of School Boards, in an alumni award nomination letter.

From her first semester as a student in fall 1966 through today, Herzog has maintained a deep connection to the Oshkosh community and to the University. Beginning in the mid-1970s she was an ad hoc instructor in the COEHS. She was a cooperating teacher to more than a dozen student teachers while in Fond du Lac and a supervisor of two master’s degree students during their educational administration internships. She also has been a member of many committees, including for dean searches and, most recently, the Sesquicentennial Committee for the University’s 150th anniversary in 2021.

After extensive reflection, Herzog said, the one achievement in all her years of work and study that she is most proud of is the bachelor’s degree she earned at UWO.

“Completing my BS degree allowed me to fulfill my goal of becoming a teacher and laid the foundation for nearly all of the other professional accomplishments on my resume,” she said. “ … The quality of my undergraduate preparation helped build confidence in my ability to be a successful teacher and professional, provided a perspective on individualizing learning, taught me time management and organizational skills, instilled a desire for lifelong learning and taught me the value of focusing on the learner.”

Through the UWO Foundation, Herzog created the Dr. Barbara J. Herzog Scholarship Endowment Fund to benefit future students in the COEHS. It’s a way for her to help undergraduates through scholarships much like she was helped as a student.

“No matter who we are in our communities, we all have a stake in how well our students are educated to help make all of our communities better places for all of us to live, learn, work and play,” she said. 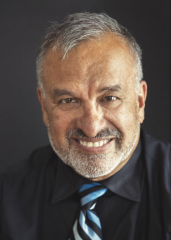 The journey Mireles took to becoming part of the UWO alumni family was all his own.

First enrolled at the University in fall 1973, he earned the majority of his college credits in the mid-1970s. But it wasn’t until 1996—after more than two decades of work encouraging others to finish what they’d begun—that he returned to complete his sociology degree.

While in Oshkosh, Mireles was president of the student organization Chicano Unidos. That experience began a lifetime of social justice advocacy. His journey later included involvement in many community organizations in Milwaukee and Madison.

His time in Milwaukee included about a decade with Centro de la Comunidad Unida/United Community Center (UCC), where he became associate executive director. While at UCC he helped open a community-based restaurant and catering service, an arts program with a theater and gallery space and a community school serving more than 300 kindergarten-through-eighth-grade students.

Beginning in 1989, he published three anthologies about Latinos in Wisconsin, titled I Didn’t Know There Were Latinos In Wisconsin. He’s also published a children’s book and a poetry chapbook. In 2016, Mireles was named as the sixth poet laureate of the city of Madison. He served two terms, emphasizing widespread accessibility to poetry.

He’s received numerous awards and recognition for his service to his communities over the years. Among them are the Dane County Martin Luther King Jr. Community Service Award in 2009 and the Friend of Education Award from the Wisconsin State Superintendent.

Roberto Rivera, a friend and colleague of more than 40 years, calls him “a renaissance man.”

“What all these accolades don’t show is Oscar’s human touch,” Rivera said. “I often meet people who say that they did not know if they had what it took to succeed. When I asked how they found out, many answered ‘Oscar.’ Oscar was the one who patiently listened to their concerns and provided them with wise counsel. He made, in their words, all the difference.”

Mireles has long credited the sociology department at UWO for giving him many opportunities to find success. What started as a one-credit internship the summer before his freshman year—an experience he said made him realize he was a part of something much larger than himself—has blossomed into a long career that’s impacted thousands of lives.

“My time at UW Oshkosh provided fertile ground for learning, the opportunity to develop lasting relationships and provided me with a vision and framework to have success in my career,” Mireles said. “I have been blessed ever since.”

The 2022 Alumni Awards Celebration will be held Oct. 21 at the Culver Family Welcome Center, with a reception at 5 pm followed by the dinner and program beginning at 6 pm The cost of the event is $40 per person. For more information, contact UWO’s Alumni Relations Office at (920) 424-3449 or alumni@uwosh.edu.