UFOS shaped like mysterious black triangles or diamonds have been repeatedly spotted flying over Britain and Europe.

The objects were intercepted by fighter jets in Belgium, tracked by a NATO radar traveling at incredible speeds, and one potentially even crashed at an RAF base.

Shapes in the sky appear to have menaced the airspace over Northern Europe for the better part of a decade – and there has still be no answers as to what they may have been.

“It is still a genuine mystery – these triangle sightings in the 80s and 90s are significant, but still unexplained,” former Ministry of Defense UFO investigator Nick Pope told The Sun Online.

Was it all an elaborate hoax? An example of mass panic? Alien spacecraft? Repeated misidentification of conventional planes? Or perhaps top secret US technology?

Britain always denied it was aware of any experimental US aircraft operating in its airspace – but declassified documents show Whitehall feared it was being kept in the dark by the Americans. 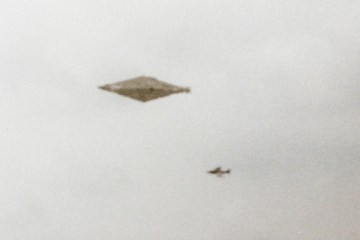 Mr Pope added: “The 80s and the 90s marked the height of a worldwide wave of sightings of triangular and diamond-shaped UFOs.

The civil servant, who joined the MoD in 1992 and worked in Whitehall until 2004, said the situation reached “near-hysteria” behind closed doors with many being “confused and conflicted” over the reports.

He said the similarities between many of the sightings had been “spooky” – with mystery aircraft able to accelerate at speeds “many times faster than conventional jets”.

“And this was coming to us from people in the air force and pilots – not just wide-eyed witnessed,” the investigator added.

And one of the most compelling incidents involving these triangles or diamonds is the so-called “Calvine Photograph”.

The photo shows an angular object appearing to be hanging in the sky – with a Harrier fighter jet also visible – before witnesses claim it jetted into the sky at a high rate of speed.

Mr Pope first revealed the existence of the photo in his 1996 book Open Skies, Closed Minds – but he says he cannot confirm the veracity of the newly released image which was released this month after being found in the possession of a former RAF press officer.

However, the Calvine incident appears to have just been the tip of the iceberg – with reports of the sightings making it all the way up to the MPs and Lords in Westminster.

Mr Pope told The Sun Online: “We were either dealing with some sort of secret prototype aircraft or drone, or with something extraterrestrial – the possibility was seriously discussed, and while never proven, wasn’t taken off the table.”

He went on: “We told the press office to tell journalists that the UFO phenomenon was of no defense significance.

“But behind closed doors in Whitehall, myself and some of my colleagues were extremely concerned, and worked hard to resolve the issue.

Are we dealing with secret US technology, with aerospace technology developed by an adversary, or with something from much, much further away?

Mr Pope described navigating through the UFO issue as “wilderness of mirrors” – with many different departments and factions all working against each other.

“Everyone thinks the government pulls in the same direction on issues and people use the phrase ‘the government’ as a single monolithic entity with a single voice,” he said.

“But that is not the case, its factional, its divided, departments go against each other – and that was the same with UFOs.

“We were fighting against some who just wanted the problem to go away, so we had to tread carefully.”

Mr Pope says there was no “catch all” explanation for the flurry of sightings, and added “there is nothing mutually exclusive about extraterrestrials and secret prototype aircraft, you can have both”.

And he explained how both the US and the UK ended up asking each other if they were testing secret prototype aircraft, a row which left the US air force chief at the time “incandescent with rage”.

But he said while some sightings could have been secret advanced aircraft – there are many others which remain a “genuine mystery”.

Scotland and the North Sea seem to be at the center of this flurry of sightings durings the late 80s and early 90s.

It has been speculated that RAF Machrihanish – which was used by the Americans during the Cold War – could have been a base for highly advanced experimental aircraft, often dubbed The Aurora.

RAF Machrihanish is a highly isolated base on the tip of Kintyre peninsula, has a 10,000ft long runway, and was an emergency landing site for the space shuttle.

And in the 1960s, the base had been designated Naval Aviation Weapons Facility Machrihanish – with its mission to store “classified weapons”.

The base was round 150 miles from the location where the Calvine Photograph was taken in 1990.

So could the base have been at the center of the “black triangle” story – and could the shape at Calvine have been the Aurora, or another top secret experimental aircraft?

Mr Pope told The Sun Online he could not go into detail regarding the base due to the official secrets act, but said it was a “perfect location” if the US did want to test an experimental craft over the Atlantic.

Elsewhere, sources told The Scotsman in 1992 that an RAF air traffic controller detected an unexplained blip emerging from RAF Machrihanish.

The source recorded the object moving at three times the speed of sound – so the air traffic controller contacted the base.

He was allegedly told to forgot what he had witnessed and not mention it again.

And another separate report states a high speed blip was detected over the North Sea by a radar station at Prestwick.

It was reported to RAF Buchan, only for the base to deny all knowledge of the any aircraft in the area.

The article also reported other sources claiming to have heard an “unusual ear-splitting jet noise” being heard nine miles from Machrihanish.

“A mysterious, fast-moving shape in the sky has been scaring sheep in the Mull of Kintyre,” reported The Sunday Telegraph in 1992.

And then we travel south to RAF Boscombe Down in Wiltshire – where in September 26, 1994, something very strange occurred while it was under the control of the MoD’s experimental research unt DERA.

Locals reportedly heard a loud unusual “humming” noise days before as some kind of aircraft appears to have touched down a few days later.

And then four days later, witnesses allegedly spotted an unusually shaped aircraft sitting damaged on the runway covered in tarpaulins and reportedly the SAS were deployed to protect the wreck.

Mysterious aircraft had been seen coming and going from the base, including priority transports for US defense officials and an “unmarked” Boeing 707.

The crashed aircraft reported remained hidden a hangar until September 28 when a US C-5 Galaxy craft – used to carry experimental aircraft – arrived and whisked the object away back to the states.

The craft is claimed to have swept the ground with a beam like a searchlight before speeding off at high speed – with the object also being detected on radar.

Were these further examples of Aurora or a similar experimental US craft? Or potentially something more mysterious?

Britain was not alone as these sightings were also reported on the continent – with reports in Norway and famously Belgium.

Known as the “Belgian UFO Wave”, the flurry of reports came from November 1989 to April 1990 – with many people sighting fast moving triangular shaped objects.

The planes reportedly attempted nine intercepts of the object, but struggled to obtain radar lock on the shape.

But he was with denials from the highest levels of the US and NATO.

“Pilots tried to intercept the alleged crafts, and at one point recorded targets on their radar with unusual behavior, such as jumping huge distances in seconds and accelerating beyond human capacity,” he said.

And meanwhile further north, Norwegians are said to have been complaining about unexplained sonic booms along the North Sea coast during this same time period.

Whichever way you look at it – it certainly appears something was going on in skies of Northern Europe.

Graeme Rendall, an aviation expert from UAP Media UK – the group who helped reveal The Calvine Photo, told The Sun Online: “Rumours of secret US tech either flying over Britain or using our air bases abounded during the late 1980s and early 1990s.”

He went on while some of these encounters were “probably not” UFOs – it appears there was something going on which is still being kept under lock and key.

“The Calvine object hovered and then shot off upwards and disappeared, which seems to demonstrate technology far beyond what is currently known about,” Mr Rendall told The Sun Online.

“Has the US developed some super-secret technology which, 32 years later, has yet to be announced publicly?

“It is more likely that these sightings involved at least one, but probably more than one completely new type of aircraft, something that for whatever reason, those behind its development and in charge of its secrecy have yet to unveil.”

On January 30, 1995, Lord Kennett asked in the House of Lords: “Whether it is the case that the secret US reconnaissance aircraft known as Aurora has been flying in British airspace?

Lord Henley replied: “The existence of any secret US aircraft known as “Aurora” would be for the United States Government to confirm.

“No authority has been given for any such aircraft to fly over the United Kingdom or to land in this country and we have no evidence to suggest that such an aircraft has.”