The Kelani Ganga is not merely a river. It has holiness beyond humanity. The river is connected closely with the Sinhala Buddhist culture and religion, especially for the people living in the area known as the Kelani Valley. 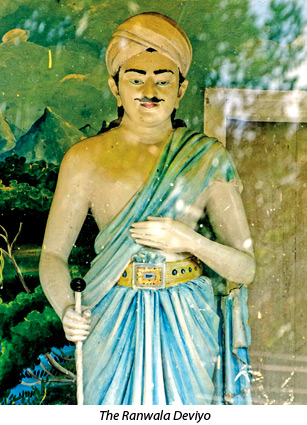 This derives primarily from the fact that the Kelani Ganga is associated with two of the most venerated Buddhist shrines, Sri Pada (Adam’s Peak) and the Kelani Raja Maha Vihara, trod by the Buddha during his third visit to the country. He is said to have bathed in the Kelani Ganga before stepping on the ground where the temple of Kelaniya now stands. He also put his footprint on the summit of the Sri Pada mountain where the river springs out, on the invitation of God Sumana Saman.

People consider it a holy river and its water is venerated by them. When we look at the river today, the holiness cannot be seen. The water is covered with toxic foam caused by industrial waste and sewage from Colombo and other cities, chemical waste from manufacturing plants and plastic waste. Water purified from this holy river provides three quarters of Colombo’s water needs.

The most wondrous thing is that even today, many people wade in the polluted waters and bathe in the river. Women wash their bundle of linen on the banks of the river while children swim in the water, bringing a threat to their health.

Although the 145 km-long Kelani Ganga is not the longest river in the island, it is important as the main river that flows through Colombo to the Indian Ocean. The Kelani Ganga begins its seaward journey in the cloud forests of the Sri Pada mountain range and flows eastward through Maskeliya, Laxapana, Kitulgala, Karawanella, Hanwella, Kaduwela, Kelaniya and out to the ocean just North of Colombo. 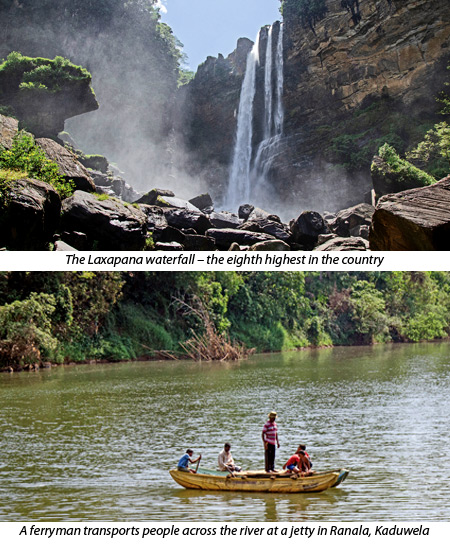 At Maskeliya, it begins as a small stream and widens to create a wonderful waterfall at Laxapana – the eighth highest in the country. In the higher reaches, several large hydroelectric schemes dam the river and provide hydroelectricity to the Ceylon Electricity Board.

Kitulgala, the wettest, densely forested and beautiful area of ​​the Kelani Ganga, became famous around the world in 1956 when it was used as the shooting location for the Academy award-winning movie, Bridge on the River Kwai. The movie set included a real steam engine being blown up over a life-size bridge straddling the Kelani Ganga just East of the Kitulgala town. A few remnants of the concrete foundation and iron rods of the former bridge can still be seen at the foot of the river bed.

Today, this section of the river in Kitulgala is a prime destination for foreign and local tourists as adventure and eco-tourism such as white-water rafting, hiking, nature trails and bird-watching. The village community earns their livelihood through tourism.

Karawenella is another point that gives attraction to the Kelani basin. A bridge has been built across the Kelani Ganga connecting the Hatton- Avissawella highway. From this bridge, the Eastern part of the Kelani Valley can be seen straight up to Kitulgala. 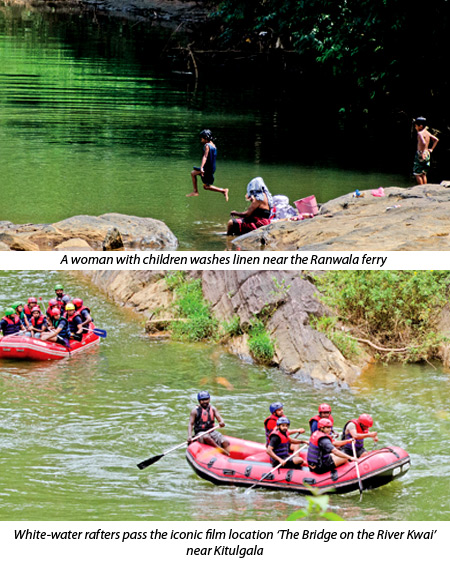 When I traveled along the banks of the Kelani Ganga from Hanwella to Kaduwela in 1998, I caught glimpses of sand mining carried out exclusively by hand. From a moored barge, people dive to the river bed, from where the sand is lifted to the barge in a bucket. When the barge is full, it is taken to the bank, and the sand is unloaded by a separate team. Today, problems arise as saline intrusion is enhanced by the deepening of the river caused by the sand mining.

A couple of weeks ago, I witnessed a temporary dam built with sand bags across the Kelani Ganga adjacent the water purification plant at Ambatale to avoid seeping sea water into the upstream of the river.

I have journeyed up the length of this great river many times all the way from the Central highlands to Colombo, capturing the beauty and lives of the people who live on the valley, depending on it to feed and shelter them. In fact, these photographs tell the river’s diverse story.