Environment experts have warned Uganda to brace itself for more disasters if enough effort is not invested in protecting its natural resources.

dr. Andrew Seguya, the executive secretary of the Greater Virunga Transboundary Collaboration (GVTC), said increased human pressure on biodiversity has led to the fragmentation of the landscape.

The factors behind this pressure on the land are factors such as infrastructural development, illegal grazing, and human-wildlife conflict.

The Greater Virunga landscape is shared by three nations: Uganda, the Democratic Republic of Congo (DR Congo), and Rwanda.

“We have the biggest concentration of human beings in this landscape,” said Seguya, pointing to the estimated 1,100 people per square kilometer.

Greater Virunga is home to rare and endangered species of both flora and fauna, including Mountain Gorillas.

Seguya said climate change is real, and that is worsened by activities such as deforestation and silting of lakes in the vast area.

He was speaking during the signing of an inter-agency memorandum of understanding between three government ministries in Kampala on Wednesday.

The agreement involving the agriculture, environment, and tourism ministries will facilitate effective inter-agency collaboration in the conservation and management of the landscape.

Each of the three nations will have a collective voice to engage on the various matters regarding the shared space.

“For instance, on Lake Edward, we have illegal fishing. Many fishermen have been killed because of the misunderstanding on Lake Edward. “Now we have one voice on the Congo side and in Uganda to discuss how the resource will be managed to stop the challenges on that lake,” said Seguya.

Representing the water ministry at the signing, Stephen Mugabi (assistant director of environment affairs) said the GVTC approached the ministry three years ago on a move towards the protection of the Virunga landscape. 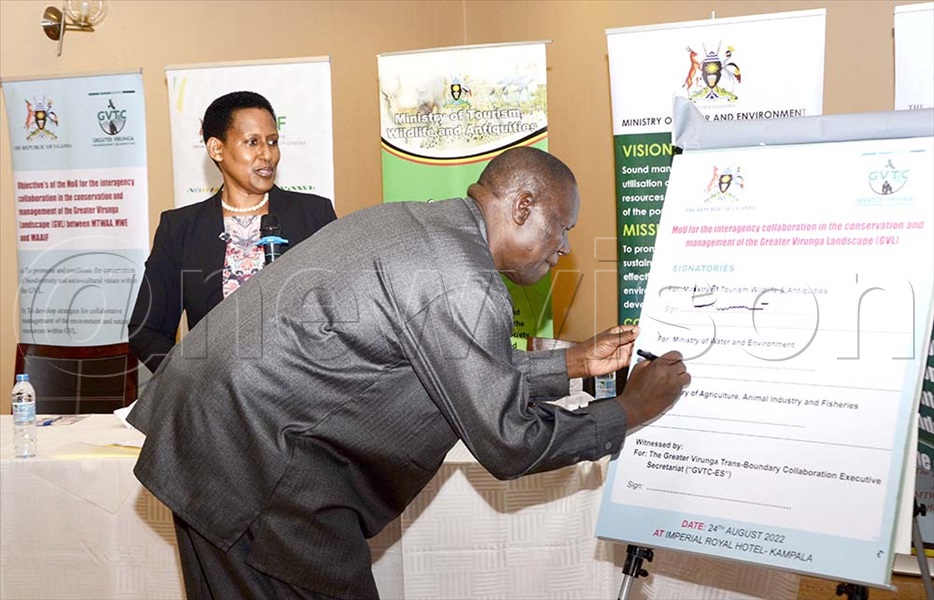 The area is beset with challenges regarding management and natural resources.

Population density and fragmentation are just some of them.

“We need to put in place strategies, approaches, and frameworks which can help us to handle the existing challenges in the landscape,” Mugabi said.

Doreen Silver Katusiime, the permanent secretary at the tourism ministry, said collaboration is important to ensure the resources are sustainably managed for the benefit of the people – and future generations.

She said the three neighbor states “have committed to protect and conserve the Greater Virunga landscape”.

Pledging her ministry’s commitment to the MOU signed this week, Katusiime said the agreement is timely and will ensure effective protection and conservation of the resources in Virunga.