A view of a village after the comprehensive improvement of sanitation in the rural “toilet revolution” carried out in Yachuan town of Zunyi, Southwest China’s Guizhou Province, on August 7, 2022. Photo: IC

Who is the Communist Party of China (CPC)? What is the CPC’s role in the new era?

The CPC has grown into one of the largest ruling parties in the world in the process of leading Chinese people in seeking liberation and happiness, making China as strong and prosperous as it is today.

As the CPC ushers the nation into a new era of development, the last decade has witnessed great achievements in national strength and prosperity, with people’s confidence and recognition of this path rising to unprecedentedly high levels.

With more than 96 million members, the CPC will convene its 20th National Congress in the second half of the year, which is expected to guide the country’s development and policymaking. Ahead of the meeting, the Global Times is publishing a series of stories to help the world understand the CPC in the new era, through the stories of CPC members working on the frontlines of various fields, as well as through observations made by respected scholars

In this installment, a CPC member who promoted the “toilet revolution” in a rural county shares how he witnessed how a modern toilet facility has the potential to boost tourism, curb the spread of infectious diseases, and give dignity to members of a society.

More people are now aware of the important role that toilets play in enhancing the overall state of a society. What’s behind China’s far-reaching”toilet revolution” is the CPC’s value for human rights and treasuring of the social advancement of the country.

The Chinese government’s “toilet revolution” movement was launched in 2015 as an integral part of a campaign aiming to boost the country’s tourism industry. subsequently, from the reconstruction of tourism toilets to promote rural toilets upgrading, the scientific layout of urban public toilet sites to list the rural latrine improvement as a binding task that must be completed in the 13th Five-Year Plan(2016-2020). In recent years, the “toilet revolution” has continued to advance in China.

Currently, the campaign focuses on rural households that are usually equipped with unsanitary latrines in open areas.

In order to improve living conditions in rural areas, China has invested a lot of manpower and material resources in the “toilet revolution.”

By the end of 2021, more than 70 percent of rural residents had access to sanitary toilet facilities. More than 90 percent of rural residents in eastern China and the suburbs of central and western China now have access to sanitary toilets. Since 2018, more than 40 million rural toilets have been renovated, official data shows. 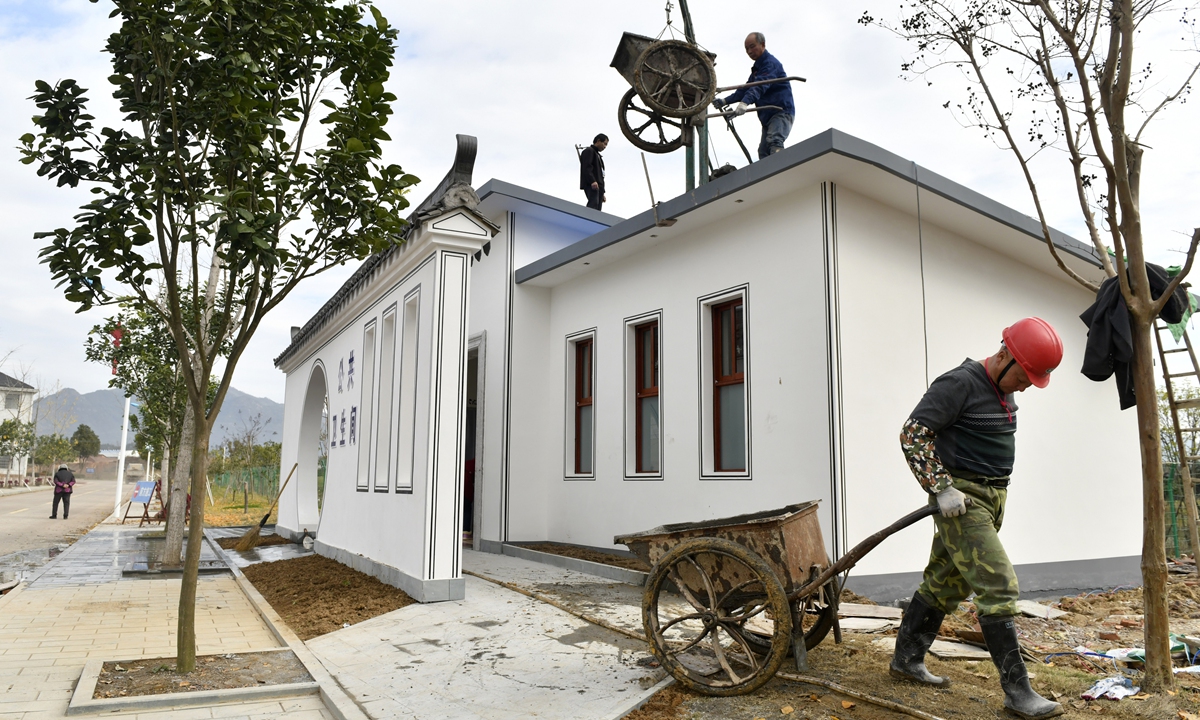 In the last two decades, China has made progress in toilet facility availability. According to the estimates from China’s National Health Commission, between 2000 and 2017, the availability of sanitary toilet facilities in rural China increased from 40.3 percent to 81.8 percent.

Chinese President Xi Jinping has also stressed the further advancement of the “toilet revolution” in the country’s rural areas, calling for solid and practical efforts to ensure quality, the Xinhua News Agency reported on July 23, 2021.

Thanks to sustained efforts in recent years to promote clean toilets, notable improvements have been made in the rural living environments, Xi said. The rural “toilet revolution” will continue to be an important task of rural vitalization in the next five years, he said, calling for solid progress in light of local conditions and in a scientific manner while avoiding formalism and a waste of resources. Xi made the remarks in an instruction on the work to advance the “toilet revolution”.

Xi has also stressed the importance of the “toilet revolution” in enhancing the quality of the tourism industry. Officials are urged to make consistent efforts and employ a tailor-made approach to tackle long-standing issues and set the tourism industry on a better path.

In a report recognizing China’s efforts in building toilets, UNICEF attributed the country’s success in the “toilet revolution” to “strong political leadership, healthy financial investment. and prioritization at a local level.”

Observers have said that China’s “toilet revolution” is a prime example of how the CPC firmly makes people its topmost priority and has always been committed to serving the people wholeheartedly and working hard toward their interests and happiness.

A leap in rural ‘toilet revolution’

“Such changes could not have happened without the CPC’s favorable policies toward the people,” Luo, a veteran Party member for 20 years, told the Global Times. His family’s toilet has gone through three “revolutions” from simplistic to innovative.

Although China has become the world’s second-largest economy, some toilet facilities in poor rural areas before 2015 were still little more than makeshift shelters surrounded by cornstalks and infested with flies, and maggots, while some in far more remote areas were simply open pits next to pigsties, leading to contamination and pollution from human waste. Toilets in the countryside and at tourist sites previously had a bad reputation.

As living standards in cities have continued to drastically improve with China’s stellar economic growth, calls for the improvement of the living conditions for the country’s 600 million rural people have increased.

Back in 1996, the Luo family’s wooden house wasn’t equally self-contained. They would dig makeshift holes near the houses with a wooden board and two bricks and put a thick fence around it with barely any protection privacy.

In those days, when using the toilet, people had to take a Chinese fan to drive away flies, mosquitoes and other winged insects.

In 2003, Luo’s village carried out a collective renovation of each family’s toilet, and many of them were upgraded to the bio-digester toilet facilities.

In 2018, the local governments in Xianfeng county, responding to the national call for a “toilet revolution,” subsidized for each household with a 1,200 yuan ($175) rebate to upgrade existing toilets to clean and hygienic facilities. But questions emerged such as whether the villagers were willing to change and how such changes would be implemented, completed, and maintained. Luo and village officials who planned and promoted the “toilet revolution” were full of questions at the very beginning.

However, as a Party member, Luo never lost faith that the Party’s governing philosophy and campaign are always for the well-being of the people. After repeatedly learning about Xi’s idea about the “toilet revolution,” Luo decided to be one of the first to turn his bio-digester toilet into a modern, hygienic one.

Before the renovation, rural toilets were full of various odors, flies, and mosquitoes everywhere, especially during the summer, which seriously affected the living conditions of the people near them, Luo said.

“Now they have gotten so much better. They are quite modern and can no longer be used as an excuse by city dwellers to not return for long-awaited reunions,” said Luo.

Luo was quick to invite nearby villagers who were as yet reluctant to join the “toilet renovation” to visit his new clean toilet, and see the visible benefits, both in health and economy, to their neighbors.

The “toilet revolution” has not only improved infrastructure and sanitation, but also changed the lifestyle of most villagers. “The construction of hygiene latrines has a profound impact on the control of schistosomiasis and intestinal diseases,” said Zhao Yibiao from the School of Public Health, Fudan University.

The “toilet revolution” has also inspired the confidence of local villagers in Xianfeng county to develop tourism. More and more villagers are planning homestays, confident in providing urban visitors with a decent experience. Tian Boguo, the village’s Party chief, was one of the first beneficiaries of the “toilet revolution.” 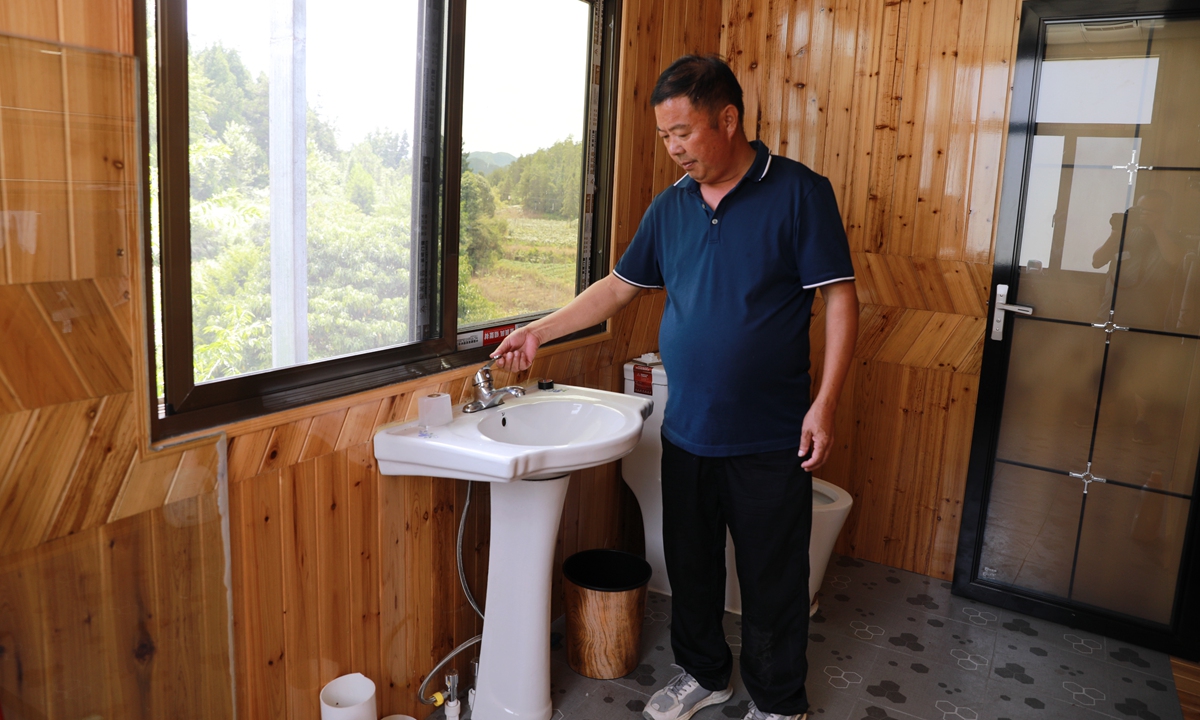 After toilets were upgraded, waste can now be bio-degraded through sedimentation, anaerobic digestion, and other environmentally friendly ways, to make it possible to store and use safely. The now harmless manure can also be used as organic fertilizer to be used in the local kiwi industry, Tian told the Global Times.

As of December 31, 2021, Xianfeng had 72,459 rural sanitary toilet facilities, covering 99 percent of the county’s households. A total of 55,000 household hygiene toilets and 279 public toilets had been completed, earning the county a provincial honor for its pioneering practices and achievements.

In the first half of this year, Xianfeng county received 1.65 million visitors and earned a comprehensive tourism income of 1.1 billion yuan.

The “toilet revolution” is a breakthrough for rural living conditions, which is a hard battle to fight in the rural revitalization strategy, Luo said. “This is a ‘trivial matter’ that President Xi cares about, but indeed a major matter for members of our village. To be concerned about what some might call trivialities in life leaves us with a warmth and happiness.” 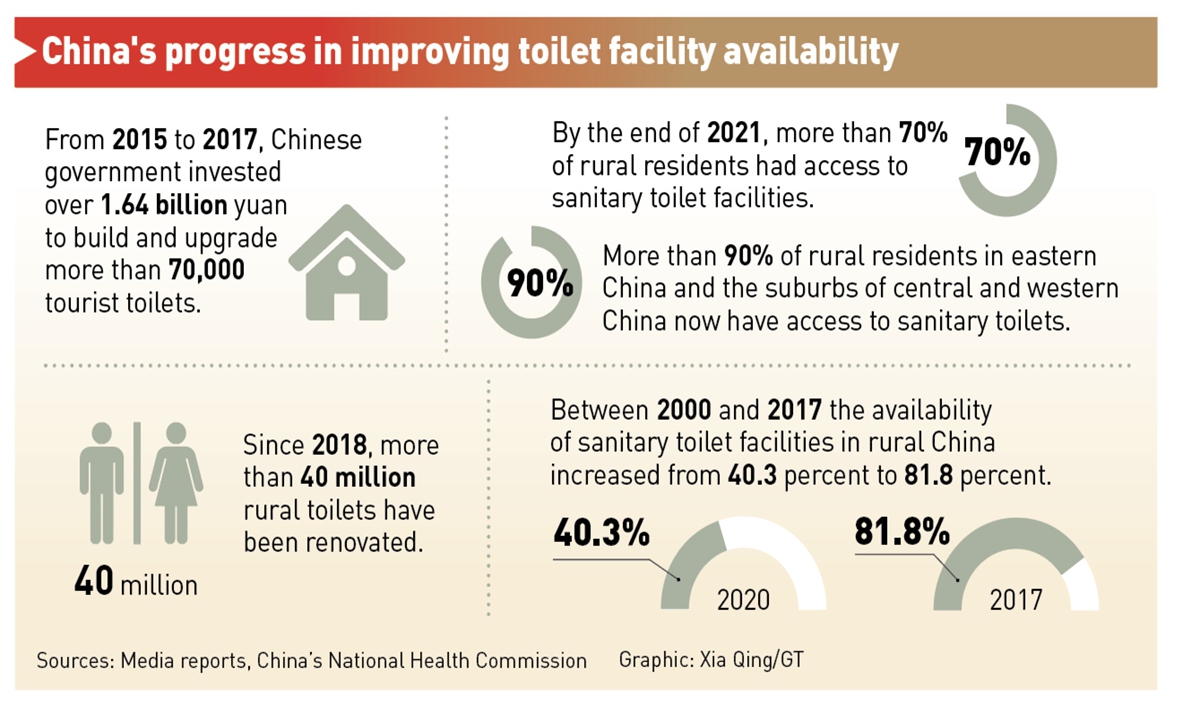