Ethiopia is an up-and-coming African destination that has the potential to become a bucket-list adventure for many travelers.

African tourism industry veteran Chris Roche recognized the potential of this destination a couple of years ago. He decided to leave his position at Wilderness Safaris and built a new company, Wild Expeditions, that focuses on what he calls “authentic, unfussy and unpretentious” destinations. “I wanted to explore the opportunities of destinations where the bigger brands are not brave enough to go,” he said with a laugh.

Roche pointed out that Ethiopia has been one of the fastest-growing economies on the African continent but acknowledged that there remain some challenges. One of these challenges is that the country doesn’t have any foreign banks, a major deterrent for companies wanting to invest in the destination. Another is accessibility, especially from the US: Ethiopian Airlines is the only major carrier that flies nonstop to the States, with seasonal service from Washington Dulles and Chicago O’Hare.

The country currently carries a Level Three advisory (reconsider travel) from the US State Department. Ethiopia has been plagued by civil unrest for years. The latest conflict broke out in 2020 between Ethiopian government forces and its allies against Tigrayan forces.

But the challenges haven’t stopped Wild Expeditions from launching tours in this virtually unexplored country. The company has one permanent camp, Lale’s Camp, which is situated on the banks of the Omo River and was founded by local guide Lale Birwa.

An ethnic Kara from the neighboring village of Dus, Birwa is fluent in many of the tribal languages ​​of the Lower Omo and, from this comfortable base in Ethiopia’s cultural melting pot, excursions are made to the isolated villages inhabited by the Kara, Hamer and Mursi people. The nearby Kara village of Dus (one of just three villages belonging to the Kara people) is only a few minutes’ walk from Lale’s Camp, with some isolated Hamar settlements farther afield. Interactions with these fascinating people and learning about their culture and customs are a key focus at this camp. Meeting with the Mursi people requires a stay at an overnight fly camp far upriver at a site where the Mursi women collect clay to fashion their lip plates.

Lale’s Camp is extremely remote, and access is possible only by river after first driving or flying to the southern Omo using the little known Murule Airstrip (less than a two-hour flight from Addis Ababa on a private charter). This remoteness is key to enabling exclusive access to authentic tribal cultures of the lower Omo, such as the Kara, Hamar, Mursi and Nyangatom, which makes for an unforgettable cultural experience.

An eye on sustainability

Roche explained that Wild Expeditions is extremely sensitive when organizing cultural encounters as decades of exploitative tourism has resulted in cultural degradation in the area. Wild Expeditions wants to serve as a catalyst for sustainable development in the region and empower local communities to make decisions about how to protect their livelihoods, cultures and future.

But culture isn’t the only drawcard for the country. Although Ethiopia is not particularly known for its wildlife, there are some unique wildlife experiences, as well. Although the size of the wildlife populations doesn’t rival other African destinations, Ethiopia’s parks more than make up for the loss with their high number of endemic wildlife and the extraordinary birdlife. 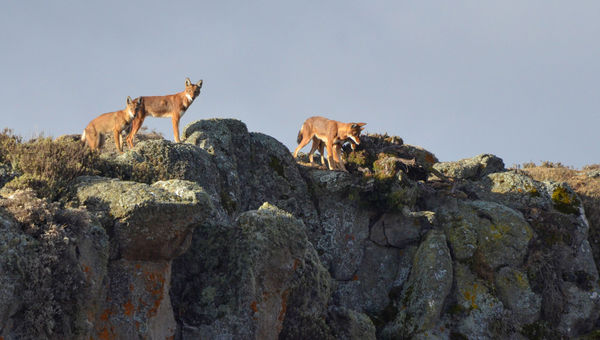 In the Ethiopian Highlands in the south of the country, travelers can go on an expedition to discover the Ethiopian wolf, arguably the country’s most iconic animal. They are similar in build to a coyote and possess a distinctive red and white fur coat; a narrow, elongated head; a black, bushy tail; and pointed ears.

There are three strongholds of the Ethiopian wolf in the Bale Mountains on the southern side of the Ethiopian Rift Valley. The fragility of this Afro-alpine ecosystem of the Highlands and its inhabitants is such that the best way to access the best areas and not leave an impact is in a small mobile camp that is quickly packed up and removed. The Wild Expeditions’ tents are ensuite using “safari showers” that are open to the sky.