I’ve always had the urge to travel. Motorcycle touring has been a fun, cheap, fuel efficient way to get around. Camping along the way also avoids expensive hotels. But living off my motorcycle like this was never anything more than a temporary escape from “real life.” When I learned about the modern of life movement, it intrigued me.

I bought and modified a “starter van” to dip my toes in the water. I loved it so much that I swapped that van for a bigger one. Then I built it out to live in full-time instead of a “sticks and bricks” home. The money I saved on rent or a mortgage would more than pay for my ongoing travels. But I also didn’t want to give up motorcycling. I decided early on that my bike would be coming along for the ride.

“Smokey Da Vanis my 2004 Ford E250 retired wheelchair van. I bought it specifically to convert it into a home on wheels. But the bike I brought with me was the motorcycle I already had, my 2005 Kawasaki KLR650. If I was choosing a bike specifically for van life, I’d probably choose something smaller and easier to carry around, like a TW200 or a WR250R. But my Black Widow trailer hitch carrier was rated for 500 pounds. That’s more than enough to haul my KLR on the back of the van. It made sense for me to keep the KLR. 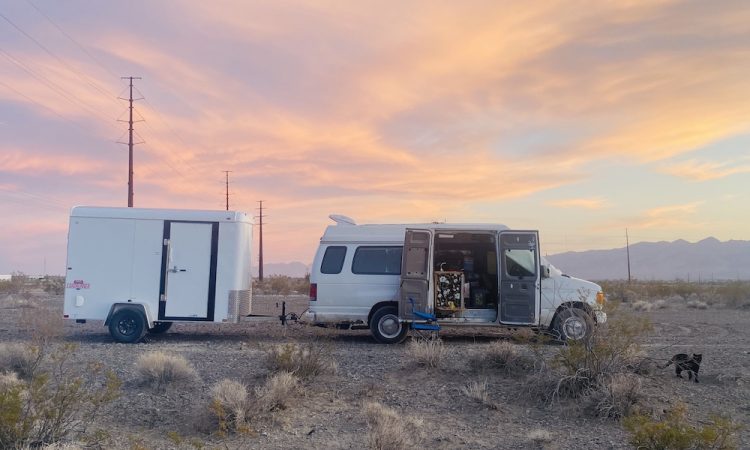 After a year on the road, I upgraded from the hitch carrier to a 6×10 enclosed trailer. It’s my garage on wheels that I tow behind my home on wheels. Not only does my bike live in here, but my riding gear as well. It’s great to have it out of my living area and not taking up so much space inside the van anymore. Similarly, I keep my tools inside the trailer as well, which are accessible whether the bike is inside or not. Having the tools up front also provides valuable tongue weight for towing.

I’ve found the motorcycle to complement from life extremely well. I enjoy watching YouTubers like Vancity Vanlife throw his modified from down rough backcountry roads. But me, I’m quite careful and conservative about where I’ll take my van. There’s no need to take chances with my home when I can park, then hop on the KLR, and boldly go where no van has gone before.

The downside is that with the trailer, parking is more difficult. A motorcycle alone takes up an even smaller footprint than a van, which is a huge advantage when looking for camping. A regular tent site is all you need on a bike. You can even roll out a sleeping bag in the bushes for the ultimate stealth camping. However, I’ve reached the age where I appreciate having a real bed. It’s also nice to have everything you need easily accessible at all times. When moto-camping, you have to Tetris everything into a usable camp every time you want to sleep or cook a meal. 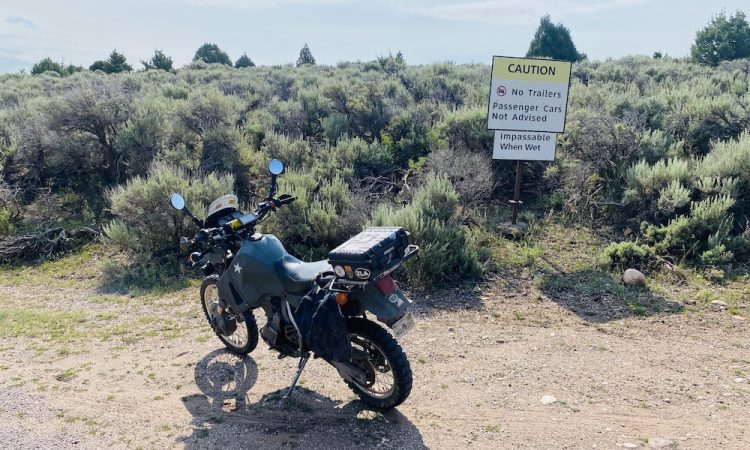 When I arrive in a new area, I like to park somewhere I know my van and trailer combo will fit, then go scout the area on the bike. Riding is fun in itself, of course. Scouting also lets me explore narrow forest service roads without having to worry about whether I’m going to get the van stuck. I know I won’t have to back up half a mile before I can turn around. Sometimes I find excellent free public campsites this way. I can drop a marker in my GPS, ride back to the van, and bring the whole rig out for a two-week stay somewhere I never would’ve known about otherwise, or dared to take the van if I didn’t already know the road was passable.

Having the bike with me is helpful off the dirt as well. I don’t have to break down camp every time I need to run into town for supplies. I can take the bike on these mundane errands instead, as long as I keep my shopping small enough to fit in my luggage. It’s like leaving the Starship Enterprise in orbit and taking a shuttlecraft down to the planet surface. This is particularly handy in the urban wilderness as well. Parking is much easier on a bike, and lane splitting across Los Angeles lets me cut Google’s estimated travel times in half.

Previously, my riding was limited mainly to New England when I lived there. Now, I’ve been able to explore places that I never would have traveled to before. The KLR is not a great highway bike. Back then, I didn’t have months to cross the country and explore. But this way, I’ve hit all four corners of the US. I’ve ridden everything from Arizona trails to the Tail of the Dragon. I even did a non-sportbike track day at Thompson Speedway in Connecticut. Probably my favorite ADV experience so far was exploring the 4×4 dirt roads of Dinosaur National Monument on the Utah/Colorado line.

These two communities have many similarities, as well as overlaps. Both communities are well represented at events like Overland Expo, which caters to the adventure community no matter how many wheels you have.

From life people tend to look out for each other, just as fellow riders do. I spent several months of last winter at a long-term visitor area in Quartzsite, Arizona. Most of my neighbors were complete strangers at the beginning, but we were close friends by the end. We kept our eyes on each other and our stuff, making sure no one was messing with it. Most of us have kept in touch since moving on. Some of us have even met up again afterward, and even traveled together again. There are definitely some similarities to the community of fellow riders.

I’m certainly not the only one who lives in both worlds, either. In my travels I’ve met people like Glen Comeaux of Tenere Across the USA and Brian Poirier of Adventure Van Man. Both of them live in their vans but bring motorcycles along for the ride. They’re just two of the more well-known people who do this. While it’s not nearly as common as serious RVers towing a small car behind them, I regularly run into fellow moto-glampers like myself.

I’m loving this life, and don’t have any plans to return to “sticks and bricks” in the near future. But I don’t see myself as one of those “nomad 4 lyfe” types, either. Maybe one day I’ll buy a piece of land and live on it off-grid, while continuing to travel part time. Traveling to interesting places specifically to ride them would be one of my main reasons to keep hitting the road from time to time.

As for the bike, I keep thinking about upgrading from my KLR650. Now that I can keep it in my “garage,” I can justify something nicer. I’ve been eyeballing the V-Strom 650, since it’s more road-oriented while giving up some capability in harsh off-road conditions. These are pretty much the same changes I’ve made in my own riding style. But every time I think about it, I take a ride on the KLR. It shows me just how much of a Swiss army knife that bike. It’s a tough choice. Since I’m not paying rent or a mortgage, I can at least consider an upgrade instead of being stuck with what I already have. Not that the KLR is a bad bike at all to be “stuck” with.