Hanoi (VNA) – The 50th anniversary of the Convention Concerning the Protection of the World Cultural and Natural Heritage will be marked with a ceremony in northern Ninh Binh province on September 6.

The event will be held by Ministry of Culture, Sports and Tourism (MCST), the Ninh Binh provincial People’s Committee, and the Vietnam National Commission for UNESCO, on the occasion of an official visit by UNESCO Director-General
Audrey Azoulay from September 5 to 7, the MCST said.

Other activities will include a photo exhibition on world cultural and natural heritage sites in Vietnam, the screening of short films about heritages and preservation efforts, and an award ceremony for a heritage-themed painting contest by the UNESCO Hanoi Office.

Ninh Binh, the venue of the coming ceremony, is home to the Trang An Landscape Complex – a mixed cultural and natural heritage site of the world that earned the recognition in 2014.

According to the MCST, UNESCO chose the theme “World Heritage for Resilience and Sustainable Development” for the 50th anniversary of the 1972 Convention amid countries’ efforts to achieve the Sustainable Development Goals and enhancement of their responsiveness to global challenges, especially climate change and epidemics. 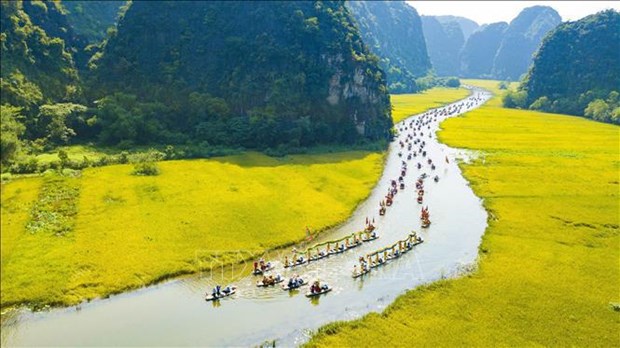 The Convention, adopted by UNESCO at its 17th session in Paris on November 16, 1972, is the only combining cultural and natural heritage protection. As many as 194 states have become members of this convention.

Since Vietnam ratified the deal on October 19, 1987, it has had eight cultural, natural, and mixed heritages inscribed in the world heritage list. The sites have greatly contributed to local socio-economic development and helped popularize the country’s images to international friends, the MCST noted.

The ministry said as UNESCO has encouraged member states to mark the convention’s 50th anniversary ahead of the global celebration in Florence, Italy, this November, the ceremony in Vietnam will help demonstrate the country’s role, contributions, and sense of responsibility towards this convention.

It will also help popularize Vietnam’s achievements in preserving and bringing into play world heritages, affirm its stature within the UNESCO framework, create favorable conditions for the country’s candidacy for a seat in the World Heritage Committee for 2023 – 2027, and further strengthen the Vietnam – UNESCO cooperation in the time ahead, according to the MCST./.