Fast fashion, which refers to the business model within the fashion industry that relies on cheap and speedy production of low quality clothing to meet the latest and newest trends, has effects on the environment. This ever-growing throwaway culture generates an estimated 92 million tonnes of textiles waste globally every year, and is expected to soar up to 134 million tonnes a year by 2030. What’s more, the fast-paced manufacturing process of the industry contributes to nearly 10% of global carbon emissions and nearly 20% of global wastewater. While the average shopper has likely purchased from textile and environmental polluters before, here are seven of the biggest fast fashion companies to avoid moving forward.

One could make the argument that Zara was the first fast fashion company in the world. First coined by the New York Times in the early 1990s, Spanish apparel giant Zara famously touted its ability to turn a garment from the design stage to being sold in stores in only 15 days. Nearly three decades later, the retail house now puts out 12,000 new designs and manufactures more than 450 million clothing items every day. It’s without a doubt one of the fastest clothing turnover in the fashion industry. Though the clothing company has announced plans to use only cotton and polyester materials that are both sustainable and recyclable, as well as reducing and offsetting all emissions by 2040it is nowhere near enough to combat its current fast fashion business model and high carbon footprint in its supply chains, which the company has made no mention to slow down.

The second-largest fashion retailer in the world, H&M, has contributed monumental amounts of textile waste over the years and continues to churn out millions of clothing items and design every year. With more than 5,000 stores worldwide, H&M is one of the many fast fashion companies known for copying high end fashion, rapid clothing turnover, and unsustainable practices, including previously using harmful chemicals such as PFCs, phthalates, and APs/APEOs in its products. The retailer has also been accused of inhumane working conditions and failure to pay 850,000 garment workers a living wage. Though the brand has promised to provide better wages, a 2018 research discovered that workers in India and Turkey earned about a third of the estimated livable wage.

The fast fashion company has since made attempts to adopt more sustainable practices, from implementing a clothing collection and recycling program within its stores, to the launch of its Conscious collection in 2011 where items are made with at least “50% sustainable materials”. H&M also publicly set the goal of using only recycled and sustainably-sourced materials by 2030. However, many criticized its sustainability claims to be vague and greenwashing, highlighting the lack of transparency in regards to reducing its environmental impact and carbon emissions throughout the supply chain .

Items made at this American clothing company are almost exclusively made with synthetic fabrics, which are not biodegradable nor be recycled after its use. According to an investigation done by the Los Angeles Times in 2017, one Forever 21 worker can produces up to 700 shirts a day, which amounts to insurmountable volumes of textile waste and pollution every year. Forever 21 was also found to vastly underpay its factory workers. The US Labor Department discovered workers were paid as little as USD$4 an hour, far below the state’s minimum wage, and was sued for multiple violations in Los Angeles and abroad. What’s more, the company failed to sign the Bangladeshi accord, which guarantees garment workers’ safety and rights. Despite Forever 21’s attempts to be more environmentally supportive, including its American Forest capsule collection which donates $1 to “help conserve and restore healthy forests”and claims to use 100% recyclable plastic and paper carriers bags, the fast fashion retailer has made no plans to address its textile pollution problem and environmental impacts. 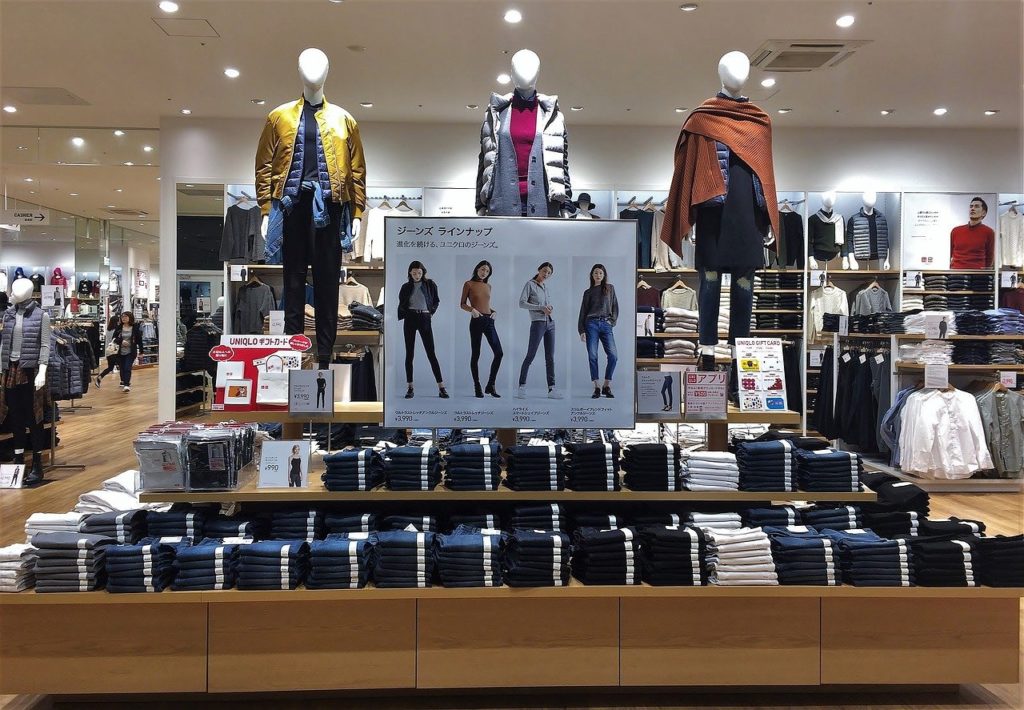 One of the best known fast fashion companies that originally hailed from Japan, Uniqlo owns over 3,000 stores across the globe and offers clothing items at low costs. The Japanese brand uses significant amounts of cheap synthetic materials, including rayon, polyester, nylon, and elastane, which cannot be recycled or break down when they’re disposed of, contributing to the global plastic and microfibres pollution. Uniqlo also doesn’t present any certification for their textiles. Much like other fast fashion companies, Uniqlo has had multiple labor rights violations and complaints. In 2015, the company withheld $5.5 million of security pay from its workers after abruptly closing down two of its facilities in Indonesia. The following year, an investigation in China found repeated unpaid overtime for workers and dangerous working environments. Though the brand has since signed the Bangladesh Accord.

In an effort to improve its sustainability, Uniqlo introduced a recycling and donation program, which encourages consumers to bring unwanted clothing (its own brand) to its stores, some of which will be redistributed to refugees, disaster victims and others in need. Down garments in particular, can be converted into new products. Though the brand is implementing initiatives to reduce water and energy use, as well as a carbon emission reduction target, reports say that the company has yet to disclose any progress in meeting this target.

Undoubtedly one of the most popular fast fashion companies among Generation Z shoppers, and famously using social media platforms like TikTok to market its products, Shein has become one of the biggest contributors to textile and environmental pollution in recent years. The brand adds at least 500 products on their website everyday, according to a 2020 press release, and sells more than 36 million pounds of goods globally a year. It’s no stranger to copyright infringement issues for stealing designs directly from high-end clothing companies. To combat growing bad press, Shein launched its”Our Products/Our Planet” campaign, which claims to produce 50-100 items for every product, and will only implement large-scale production when the product is in high demand, though stops short of detailing what the threshold is, or committing the switch towards sustainable fabrics and materials. The Chinese online retailer also recently falsely stated on its website that conditions in the factories it uses were certified by international labor standards bodies, which has prompted a number of labor watchdogs to question how it produces its clothing at such low prices.

Mango is another Spanish fashion company with stores located in more than 110 countries. In 2013, a Bangladesh garment factory with 29 brands, including Mango, manufacturing inside collapsed, resulting in the death of more than 1,000 workers with another 2,400 injured. Only nine companies offered compensation to the victims and Mango was not among them. The Bangladesh Accord was also created in the wake of the tragedy.

However the brand has been making progress on the sustainability front. Across the company’s entire line of 18,000 products, 44% of which uses sustainable materials and has moved to eliminate the hazardous chemicals PFCs from its items. Despite disclosing its carbon footprint and greenhouse gas emissions across its supply chain, Mango has made no move to set a target to lower them.

Short for “As Seen On Screen,” ASOS is a British online-only retail that offers more than 850 brands including their own on its platform. Similar to Shein, the digital fashion retailer adds as many as 7,000 new products and styles every week to keep up with ongoing trends, which makes it all the more popular with younger shoppers. The fast fashion business model relies on the rapid production of low-quality clothing, and ASOS is a prime example of that where many criticsed the clothing the company produces does not fit the way they’re advertised.

While ASOS made a public commitment to reduce its greenhouse gas emissions from its own operations and supply chain by 2020, reports say there has been evidence to suggest progress has been made, nor have there been any water reduction initiatives in most of its supply chain.