California approves bill requiring 100% of all retail sales of electricity to produce zero-emissions by 2045 – but the $3.2 billion needed for the infrastructure could fall on ratepayers

By Stacy Liberatore For Dailymail.com

California Govern Newson’s climate push is moving forward with the approval of a new bill on Tuesday that requires 100 percent of retail sales of electricity must be zero-carbon emitting resources by 2045, but the new bill means the additional $3.2 billion in costs will fall on the state’s 27 million ratepayers.

Assembly Bill 1020 includes yearly quotas the must be met, with the first being 50 percent of all electricity sold must be renewable energy by December 31, 2026 and at least 60 percent four years later.

According to the California Globe, those who passed the bill ‘ignored’ the additional costs to the Department of Water Resources to build infrastructure and ensure accessibility, which is now the responsibility of residents using 29 public water services from the agency.

However, the leader of a large gas and oil advocacy group in California is also weary that although the bill will help meet the climate change goals, it leaves the state’s economy vulnerable.

The new bill requires 100 percent of all California’s retail sales of electricity must produce zero-carbon emissions by 2045, but some say the costs to build the infrastructure will fall on ratepayers

Catherine Reheis-Boyd, president of the Western States Petroleum Association, said in a statement: ‘I’ve been doing this for over 40 years now and this is the first governor who has not sat down with this industry to talk about what would be a plan to meet our climate change goals but protect the economy.’

Assembly Bill 1020 is one of six proposals that were brought to lawmakers that aim to support Newsom’s climate change efforts.

The latest bill means that the sales of electricity must stem from renewable energy, which could be solar, hydrogen, wind, geothermal and biomass power.

California currently has 5,922 wind farms, 56 hydrogen stations and more than 230,000 homes across the state with solar panels – but this is a far cry from what is needed to hit the 2045 goal. 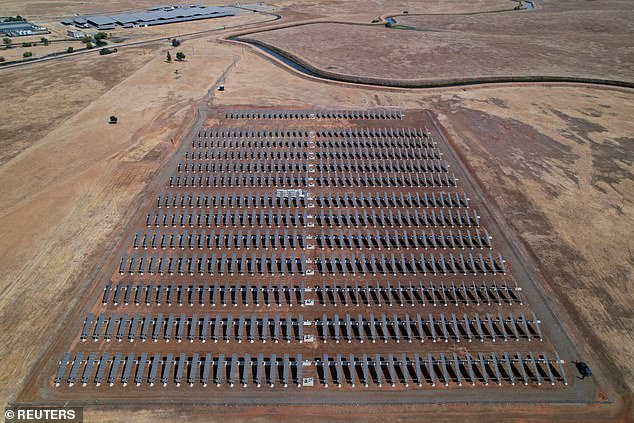 Assembly Bill 1020 includes yearly quotas the must be met, with the first being 50 percent of all electricity sold must be renewable energy by December 31, 2026 and at least 60 percent four years later

In July, Newsom urged the state to increase its offshore wind target to at least 20 gigawatts by 2045 – the Biden Administration set a target of 30 gigawatts for the entire US by 2030.

Assembly Bill 1020 comes less than a week since California banned the sale of new gas-powered vehicles by 2035.

On August 25, California became the first in the world to enforce the ban.

Automakers are now required to reduce the number of gas guzzlers they sell in order to reach the first quota of the plan that mandates 35 percent of new cars, SUVs and small pickups sold in California by 2026 be zero-emission vehicles.

The quota increases every two years, with 51 percent by 2028, 68 percent by 2030 and then 100 percent of all new vehicles sold should be battery-powered five years later – 20 percent of these sold can be hybrid plug-ins.

However, just like Assembly Bill 1020, there are several obstacles state officials must address to ensure the ban on new gas-powered cars is reasonable for all Californians such as providing incentives for consumers to buy pricy EVs and providing millions more charging systems.