Come February, there will be a significant hole in Denver’s literary landscape. After a decade of service to the book-loving community, BookBar, the unique hybrid bookstore and wine bar at 4280 Tennyson Street, is writing its final chapter.

Nicole Sullivan decided to open BookBar in 2012 when she saw that the Bookery Nook, a local bookstore on Tennyson, was closing. Back then, Tennyson was rightfully described with words like “quaint” and “boho,” but those times are long gone. Sullivan plans to close the doors for good on January 31, 2023.

BookBar has risen quickly in the ranks of Denver bookstores with its focus on local authors and its partnerships with institutions such as Colorado Humanities/Center for the Book and Lighthouse Writers Workshop. While other booksellers such as Tattered Cover began to focus increasingly on hosting only well-established authors, BookBar was a place where an up-and-coming writer could still read their work to an appreciative audience. It has hosted a number of community literary events, from the Colorado Book Awards finalist readings to a consistent schedule of author events to kids’ storytime, holiday parties, book clubs and reading series. There was rarely a time when BookBar’s schedule wasn’t full.

Sullivan back in 2012, before BookBar opened. Note that the door still has “Bookery Nook” stenciled on the glass.

“It’s been a journey,” Sullivan says. “Back in 2013, we started with just the front section of an 1896 Victorian that had some retail space built onto the front in 1948.” Since then, BookBar has been in a near-constant state of expansion. It took over the residential spaces in the back of the building and the second floor, and by 2015, Sullivan had increased the children’s section and built a garden patio gathering space in the backyard. Before she made the decision to close, she had been pursuing plans to turn a garage out back into a larger venue space with offices built above it.

Sullivan says she began considering the closure when the pandemic hit. “In March 2020 — the day we realized that we’d be closing our doors and didn’t know when or if we’d be able to reopen — I thought, ‘Well, this is it. We’ve had a good run,’” she recalls. “Who knew what life was going to look like in the next few months? 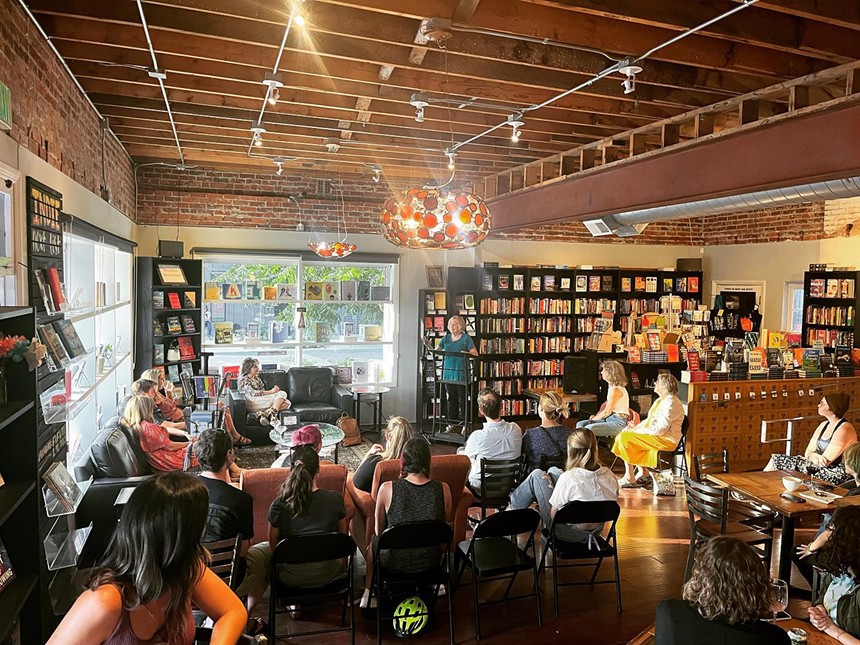 “During that time, I was surprised to find that I was a little bit relieved,” she admits. “I had been working so hard for so long, and all of a sudden, [with] all that work being taken off the table, I was able to spend more time with my family. I cooked dinner for them every night and looked forward to it. I was like, ‘Wow, life could be something like this.’”

But Sullivan says she “should have known that our community would rally around us and readers would change their buying habits in order to keep independent bookstores alive. It was a surprise, but it shouldn’t have been. We have such great customers, and people were reading more.” In 2020, BookBar’s total revenue was just 10 percent less than what it was the previous year, according to Sullivan. Bar revenues were down 85 percent, she adds, which shows just how much more book purchasing was going on to mitigate those losses.

Reopening, however, came so abruptly that it was difficult to find the same footing that the store had before COVID. “After we opened in 2013, I had a good seven years to slowly build up to where we were in 2020. But when we were allowed to open our doors again, it was like we had to achieve that same buildup virtually overnight,” Sullivan explains. “I didn’t have the level of staffing I’d had in the past. It made me start thinking about an exit strategy.” 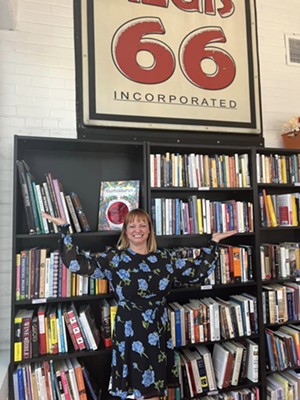 Sullivan opens up the public space at the Lowell location of BookGive.

And then there was another rise in the minimum wage that would begin in January 2023. “I was like, ‘There’s no way,’” recalls Sullivan. “I can’t make those numbers work. The margins are just too tight. Books themselves are already one of the lower-margin retail products. But when I was paying just over $7 an hour back in 2013, and now it’s going to be almost $18? The price of books hasn’t gone up nearly that much — maybe 5 to 7 percent compared to the minimum wage increasing by 120 percent in that same period. I don’t know how you make that work. I don’t know how anyone’s going to make that work.”

Sullivan admits that it’s a tough situation. “The minimum wage should increase,” she quickly adds. “It needs to. People need to make a livable wage. But if the money isn’t there…I just couldn’t make it work.”

When it comes to bookstores, there is also an additional lack of control over revenue. “Booksellers can’t raise their prices at all,” Sullivan says. “I can’t think of many products that cost the same no matter what the local economy dictates. The cost of something in Aspen, Colorado, shouldn’t be the same as the cost of that same item in a small town in the Midwest.”

It’s not that BookBar hasn’t been successful in its decade of existence. It’s won several of westword‘s Best of Denver awards in different categories over the years. It was highlighted in outlets such as ForbesFodor’s, Huffington Post and Real Simple. Sullivan herself was honored multiple times for her work, most recently with the 2022 Boucher Community Honor Roll Award for Promoting Intellectual Freedom, bestowed by the Colorado Association of Libraries.

BookBar has spun out several side businesses and charitable entities, as well, including the Airbnb/guest quarters BookBed; the small indie publisher BookBar Press; and, most notably, BookGive, which seeks to support literacy by putting books in hands for free. Other than BookBed, which has been shuttered since the pandemic, these endeavors will stay open. BookGive has just opened a public space in its facilities, which Sullivan owns, at 4890 Lowell Boulevard, and BookBar Press will continue, too. Sullivan owns the BookBar property, but she shakes her head and smiles when asked whether she would sell it. She has no plans for the building yet.

“Nothing is ever off the table, I guess,” she says. “If somebody approached me with a stupid amount of money, then I might think about it. But in good conscience, I couldn’t put it out there as a viable business for someone to purchase. If I can’t make the numbers work. … I don’t know, maybe there’s someone out there who can make something of it, but at the same time, it feels a lot like selling one of my children. I don’t know how I’d be able to just walk away.

“Besides, since we own the building, I’d have to sell it all or else still be involved in some way anyway, and that would pull me back in,” she muses. “I can tell you one thing: It’s not going to developers.”

Just recently, the literary community showed an outpouring of support for another local bookstore, Mutiny Information Cafe, after the building was seized by the city because of unpaid taxes. Mutiny quickly launched a GoFundMe to raise the $42,126 owed. Within 24 hours, the bookstore raised more than $50,000. But Sullivan says a similar gesture wouldn’t make a difference in BookBar’s fate, pointing out that there’s a significant difference between the two situations: BookBar’s issues are more about long-term sustainability, something GoFundMe is not designed to address. 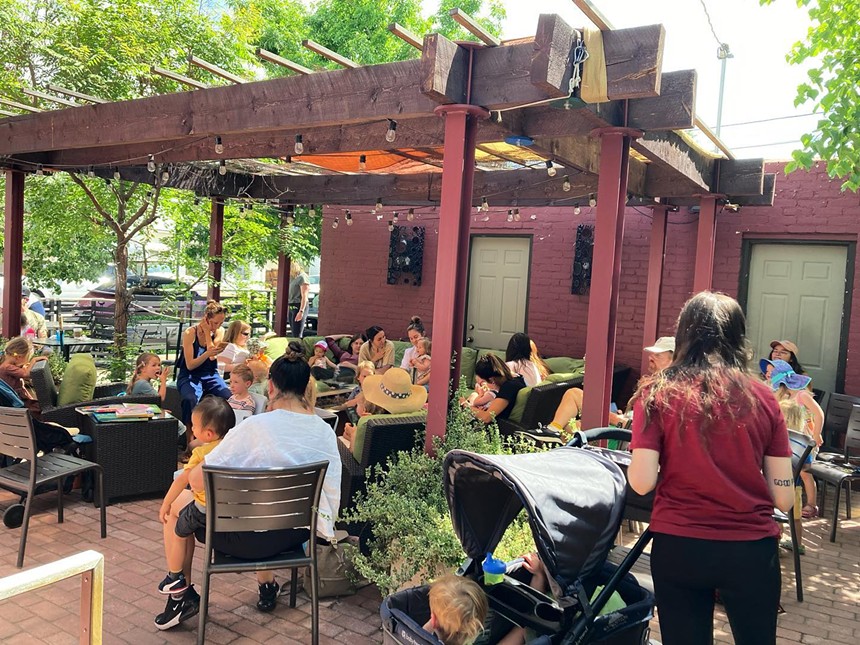 “We anticipate that we’ll get all kinds of offers for funding and help in a variety of ways, but even $50k would just be a Band-Aid, honestly,” Sullivan says. “This is such a crazy-expensive business to run. I’ll ask people to just lend their support to other indie bookstores that desperately need their help. Finances are certainly a factor, but mostly I’m just ready to move on and lead a less stressful existence.”

Sullivan will continue her legacy with The Bookies in Glendale, which she purchased last year after its founder and longtime owner, Sue Lubeck, passed away. “It takes some of the pressure off that we have The Bookies, and that it will stay open and operating,” she says. “I’m looking forward to being able to dedicate more of my time and attention to this very special store and its good-hearted employees, who are such dedicated champions of literacy and free expression. Many of them are former librarians. They’re the badasses who are currently holding up our democracy.” With that in mind, Sullivan plans for the store to take up as much of the slack in terms of author events and literary outreach as it can.

Her plans for BookBar’s final months are “to have as much fun as possible. To have one last joyful holiday season, to spend time with the BookBar regulars, see our customers as much as we can, to keep things as stress-free for the staff as possible. After that, I don’t know,” she says. “Hopefully we can fill this space with a responsibly run community enterprise. We want to be good to our neighbors and true to the history of the building and end BookBar’s run with as much gratitude and graciousness as we felt at the beginning.”

BookBar, 4280 Tennyson Street, is open through the end of January 2023. For more information, see the BookBar website.