Only 4 of the 12 moonwalkers are alive today. One of them, Apollo 16 astronaut Charles Duke, visited Armenia to participate in the STARMUS VI Festival.

In an ARMENPRESS Exclusive, retired astronaut Charles Duke spoke about the mankind’s return to the Moon, the US-Russia cooperation in space and the future of space exploration.

Artemis – NASA’s program to return astronauts to the lunar surface

Charles Duke: I’m optimistic. Getting a vehicle as complicated and as big as Artemis off right on schedule is very demanding task… Little things can cause a scrub of the launch.

The last time there was a disconnect where they feed hydrogen, in the tanks…we had a leak there… You could have an explosion when you lift off. They were very careful with the first launch.

But I’m very optimistic… It looks like the next launch will be in October.

Future of cooperation in space between the US and Russia

Charles Duke: Politics haven’t affected the space programs that much. The crew right up there now is a crew from Russia and the US and some other country. I see that continuing. We’re launching now our astronauts from US-owned SpaceX Dragon I believe it is. Russians keep supplying their crews. They seem to get along pretty well. Politics seems to disappear when we get into space together. And the crews get along very well. I hope that the governments can continue to encourage that. Let’s finish out the program, we’ve got another 10 years maybe with the Space station, then it’s over. We can continue the cooperation, hopefully. 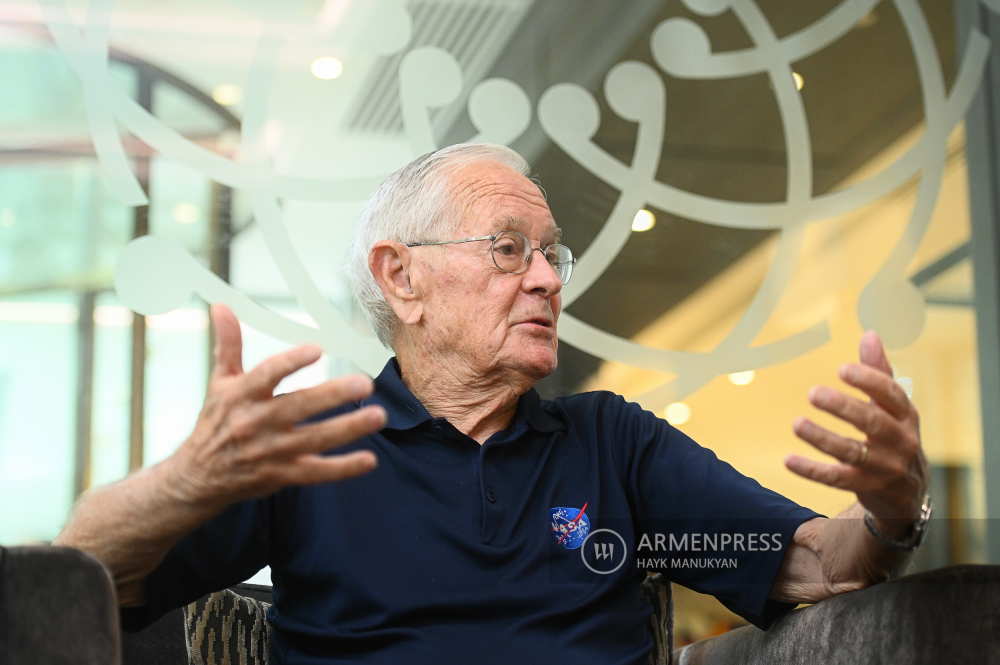 Charles Duke: I’m excited about space tourism. I have some friends who have been up there – Laura Shephard, Alan Shepard’s daughter went up on Blue Origin and several others that I’ve known. I tell them all that we’ve watched them on Blue Origin launch. Not this last one, but the one before. There were six people on board. I said; “When you get up there, you’ve got 5 minutes. Look out the window. Don’t worry about zero gravity, look out the window. It will be the most spectacular view you’ve ever see in your life”.

I say that the future of near space is private – SpaceX, Blue Origin in our country, Boeing’s Dreamliner or Starliner, whatever they call it. NASA’s going to be using its money to go deep space. Artemis and stuff like that. And I think down the road there’s a desire to go to Mars, but as I said earlier Mars is a big deal and it’s gonna take a lot of money. They are very good at it, I’m excited about the privatization, I call it, of Space. We’ll just see what happens.

Where can Space exploration take humanity in coming decades?

Charles Duke: My hope is that Artemis will be the first steps of an establishment of a science base on the Moon. We have a science base in Antarctica with a lot of nations. And it’s a hostile environment in Antarctica. But we do it, we live there. And we can do the same on the Moon. And just learning how to operate on the Moon, and experiments, and telescopes and just human physiology and all of the things and discoveries, perhaps water, ice on the Moon…There’s just a lot to learn from the Moon about Space.

We’ve got to go to Mars and live on Mars. We need a practice down here because once you leave to Mars on a Mars mission you’re on your own. Everything got to work, you carry it all with you. But on the Moon you’re 72 hours away. You’ve got instant communications. “Hey, Huston”, or whoever you’re talking to, ‘We’ve got a problem here over the system’. And they are right there ready to help you and guide you through the solutions. But on Mars – ‘Houston, we’ve got a problem’, well, hopefully, you’ve got a spare part on board. So the planning on the Mars mission is very, very difficult and important.

Crew selection – do you have a doctor on board? Get sick out there on your way to Mars, you need some help. You can’t get it from Earth. You can get some advice from Earth, but even in Mars “Hey, Huston, we’ve got a problem”. 12 minutes later they hear you. 12 minutes later you hear them. That’s 30 minutes, a lot can happen in about 30 minutes. Mars is autonomous. And we need to practice and we need to have such confidence in our systems that we can confidently launch and get out the Mars. To me it’s more than 10 times harder than going to the Moon. Planning and preparing for Mars mission. But I think that the human spirit is to explore and it’s the nearest possibility to have another planet. So we’re gonna go there. 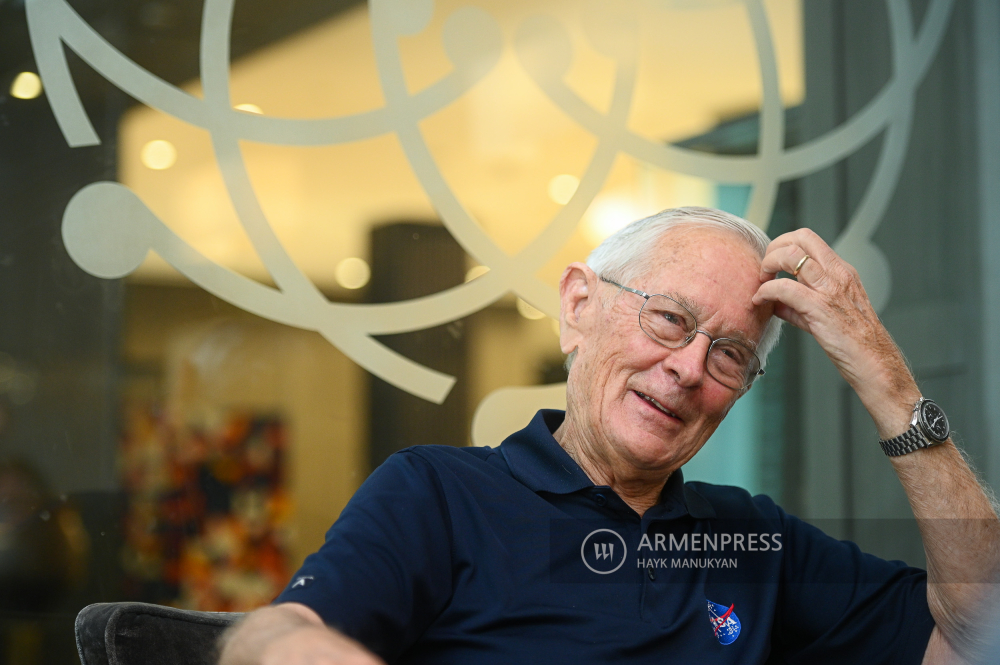 Youngest man to have walked on the Moon?

Charles Duke: NASA has made a big point about that, but I was only 4 months younger than the next guy – Jack Schmitt or Harrison Schmitt on Apollo-17 was really the same age. He just turned 87 and I will be 87 four months later. So, it’s no big deal. I’m looking forward to Artemis taking over. You know, at 87 I’m still the youngest man on the Moon.

I hope that in few months I can say – ok, young lady, you’re the youngest or young man, you’re the youngest guy or person. It was just a great honor for me to be selected. We had 42 astronauts on flight status back then and only 24 of us got to go to the Moon. So there were 18 guys really disappointed that they didn’t go. And the 12 that didn’t get to walk on the Moon, they were better off than the ones that didn’t go off at all. But they didn’t get to walk. So have been selected to be one of the 12 that walked on the Moon is a great honor and humbled by that that I got selected.

How does the 86-year-old retired astronaut stay in shape?

Charles Duke: I’m in a pretty good shape thankfully, I work out, I can still pass a NASA flight physical. We have a treadmill and recline bike at our home and some weights. So I do sit-ups and push-ups and lift weights and I walk. I don’t jog on a treadmill anymore but I jack it up to 10 degrees and walk like 5 kilometers per hour. I do that for 30-40 minutes and when we are home, I try to work out 5 times a week.

Right know I’m about 70 kilos. I weigh the same now as I did then… 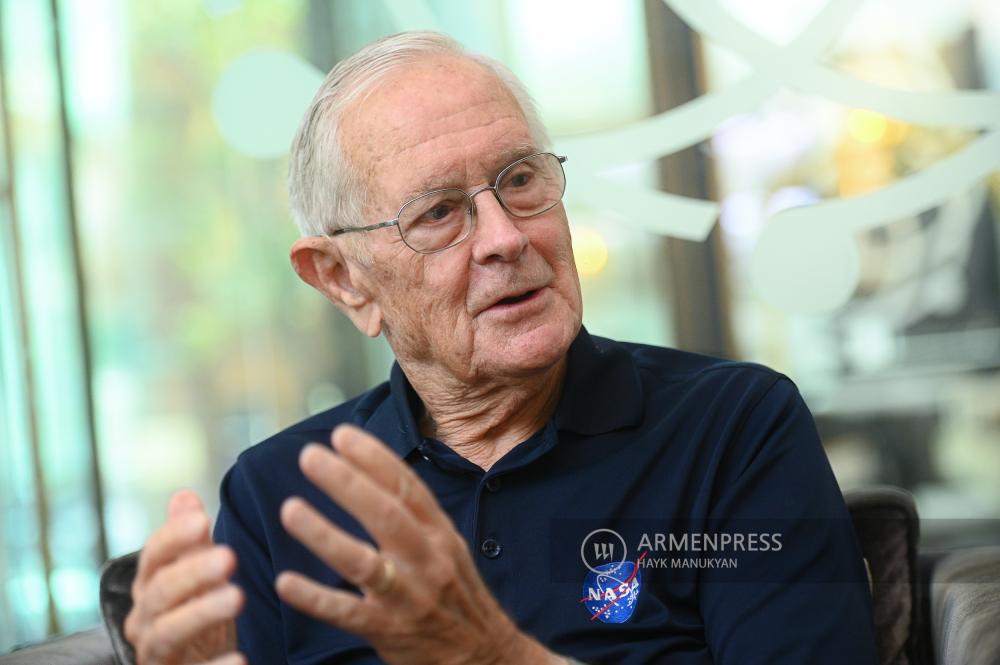 The greatest scientific achievement of the 21st century

Charles Duke: The greatest scientific achievement I believe it’s probably medicine. The discoveries of the ability to look inside your body with CT scans and magnetic resonance and all of them saved so many lives. My wife, for instance, she’s gone through complete shoulder replacement. She injured her shoulder 25 years ago in a ski accident. And it just got worse and worse and so finally she had to have that replaced. She had breast cancer that diagnosed early enough from a mammogram. And so all of these things my parents’ generation didn’t have. … And I think medicine to me, in a various things that medicine came down with, is the most exciting to me.

Charles Duke: It’s good to be in Armenia. We’ve been here 7 years ago. Garik Israelian brought us and we spent a week here. It’s a fascinating country and the history.

STARMUS is always a very exciting time. I’ve been in every STARMUS except for one. Garik is a really good friend and supporting. It brings science community together. I met some astronauts here that I hadn’t met before. They were Shuttle astronauts mostly. With scientists and engineers from all over the world. I enjoy meeting people and getting to talk about their business. It’s a great time to bring together. Brian May has become a really good friend of ours. To see him and his talent and all of the musicians is really very special too. We always enjoy STARMUS.