A new restaurant, BirdsNest Grille, has opened inside Random Tap in Elgin.

The new eatery, which opened in early September, is run by Chapin residents Donald and Chatara Taylor, who bring years of experience in the restaurant industry to the new venture inside the popular taproom, which features a wide variety of craft beers.

Random Tap’s owners had been searching for someone to take over the kitchen after the death of former chef Catherine Cosby in a car accident in October 2021. 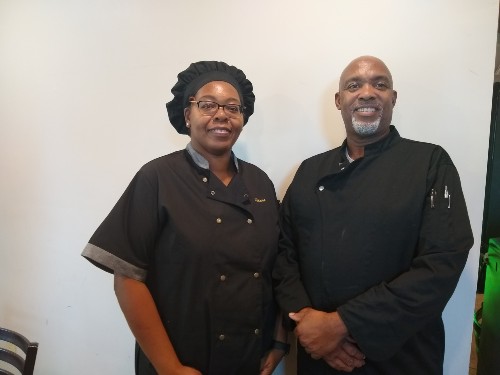 The Taylors heard about the opportunity and decided to bring their talents to Elgin.

The restaurant is named after the town of Birdsnest, Va., where Donald Taylor spent many summers during childhood and watched his grandmother and other relatives in the kitchen.

“I had that old-school grandma who really knew how to cook and that gave me a lot of inspiration,” he said.

Taylor’s love for cooking developed further in high school home economics class, where he said one teacher urged him to pursue a career as a chef. After serving in the US Army, Taylor went to culinary school.

Chatara Taylor, meanwhile, said she first got exposed to the restaurant industry while waiting tables as a teenager, and has always come back to it even after working in other fields such as retail and office management. She said her interest is mostly in baking while Donald concentrates on all other facets of cooking.

The Taylors moved to the Midlands 13 years ago and ran a restaurant, Captain Taylor’s BBQ and Seafood, from 2017-2019.

Since then, they have run a food truck, Hooked on Sammiches, which serves a variety of gourmet sandwiches including lobster rolls and po’boys made with shrimp, chicken, and alligator, among other offerings. They decided to get back into a brick-and-mortar site after hearing about the opening at Random Tap.

“We love the food truck, but you can only have so much variety in the restricted space,” Chatara Taylor said. “He really wanted to get back to having a full kitchen experience.”

They will continue to run the food truck occasionally but are focusing on growing BirdsNest right now.

BirdsNest Grille’s menu includes a wide variety of dishes from starters to desserts. The variety includes everything from shepherd’s pie to traditional Southern favorites like shrimp and grits, and other casual dining fare such as quesadillas, burgers and pizza.

The Taylors said they also hope to start serving brunch soon and would like to add touches including a Bloody Mary bar.

BirdsNest Grille is located inside Random Tap at 117 Spears Creek Church Road in Elgin. Hours are 4 pm to 9 pm Tuesday and Wednesday, 2 pm to 9 pm Thursday, 2 pm to 10 pm Friday, noon to 10 pm Saturday and noon to 7 pm Sunday.