“This has been more than two years in the making, that’s how complicated it’s been,” Nicole Petersen and Tanella Bolt explain to PAX during a recent accessible travel FAM to white horse, hosted by Tourism Yukonsupported by Air Canadaand organized by SoulFly Experiences.

Petersen and Bolt are the co-founders of SoulFly, which offers inclusive, barrier-free travel packages in Victoria, the Okanaganand now, the Yukon.

“I was so naive when I started,” says Petersen. “We had to get government funding to make a mobility and sensory-accessible Yukon package possible. Operators were passionate about becoming accessible but they couldn’t afford it.”

PAX saw the accessibility journey begin at Vancouver Airport on route to whitehorse.

With 48-hour advance notice, Air Canada was ready to help both onto and off of the flight.

But while airline and airport mobility services have long been in place, SoulFly couldn’t start to consider an accessible Yukon tourism package until they’d addressed the lack of accessible ground transportation to get from the airport to hotels and activities. 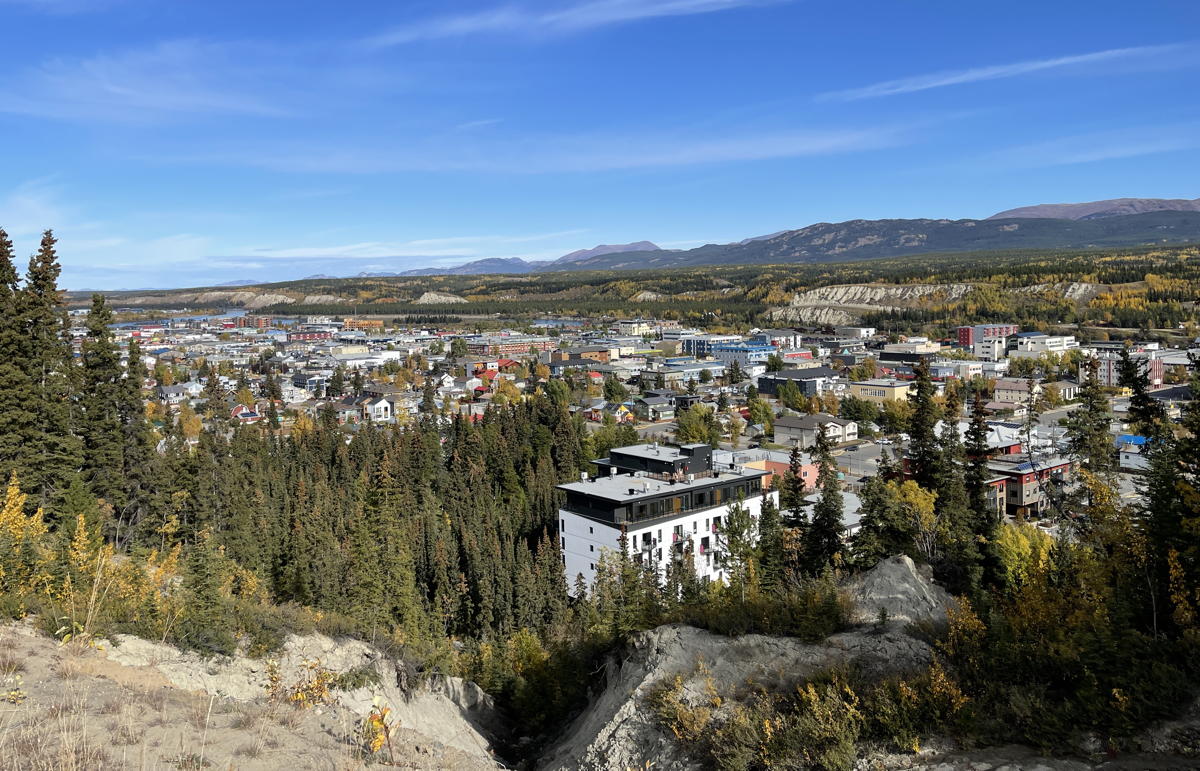 “It had to start with transportation or we couldn’t do anything,” says SoulFly.

SoulFly helped secure $105,000 of Yukon funding, which went to 11 operators/organizations to improve their accessible tourism offerings. 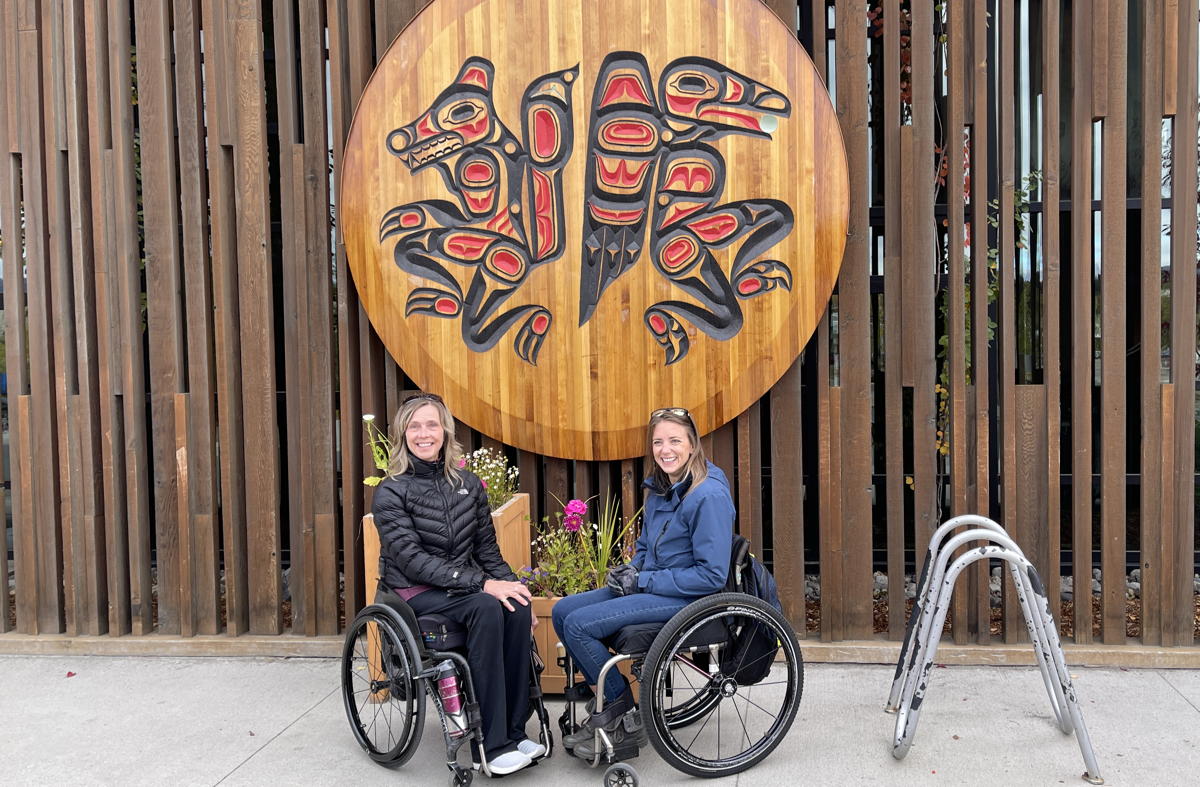 That helped Inclusion Yukon purchase a wheelchair-friendly mini-van, which is available as part of the SoulFly package.

The second FAM vehicle is a huge white SUV rental, which Bolt outfits with her adaptive hand controls so she can chauffeur.

She drives us through Whitehorse, along the Yukon RiverHaida murals and occasional First Nations graffiti art as a forest of yellow fall foliage ushers in a seasonal Yukon gold rush. 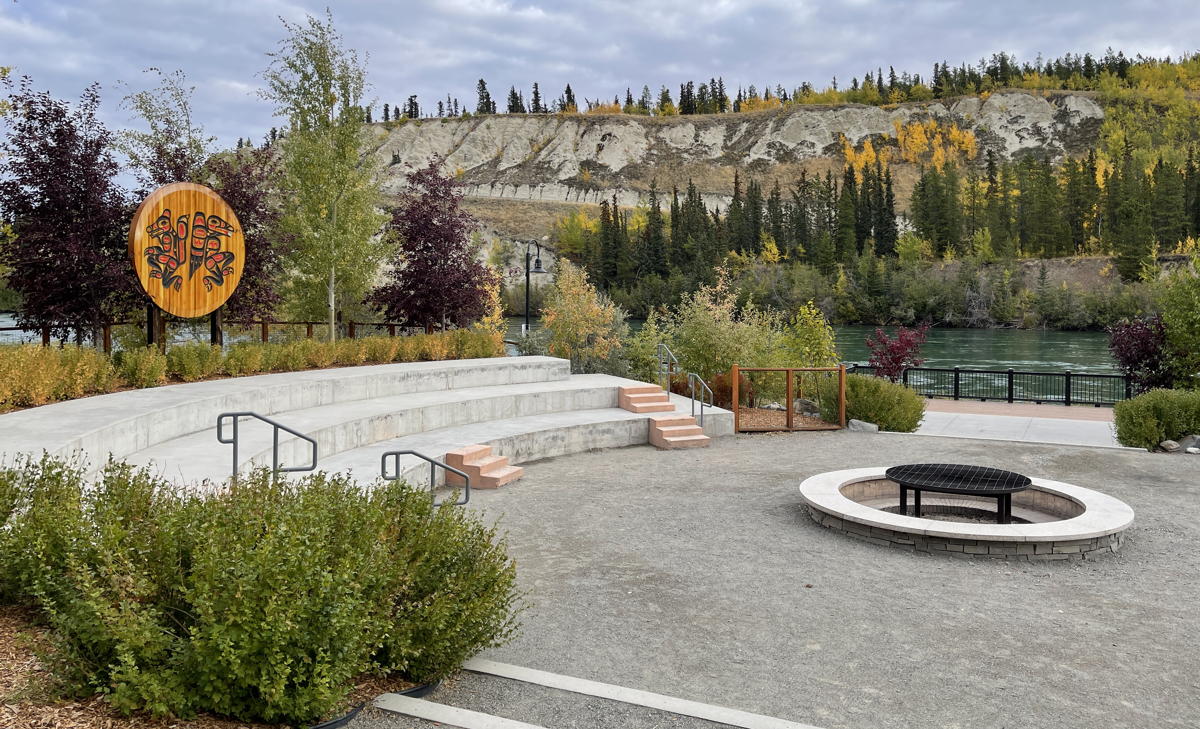 “This time of year, the colors and light make it the perfect time to visit Whitehorse,” says SoulFly. “No bugs; the weather is cool, and you’ve got a chance to see Northern Lights.”

According to Tourism Yukon, about 28 per cent of their tourism is Canadian, which means many domestic travelers are familiar with the destination. 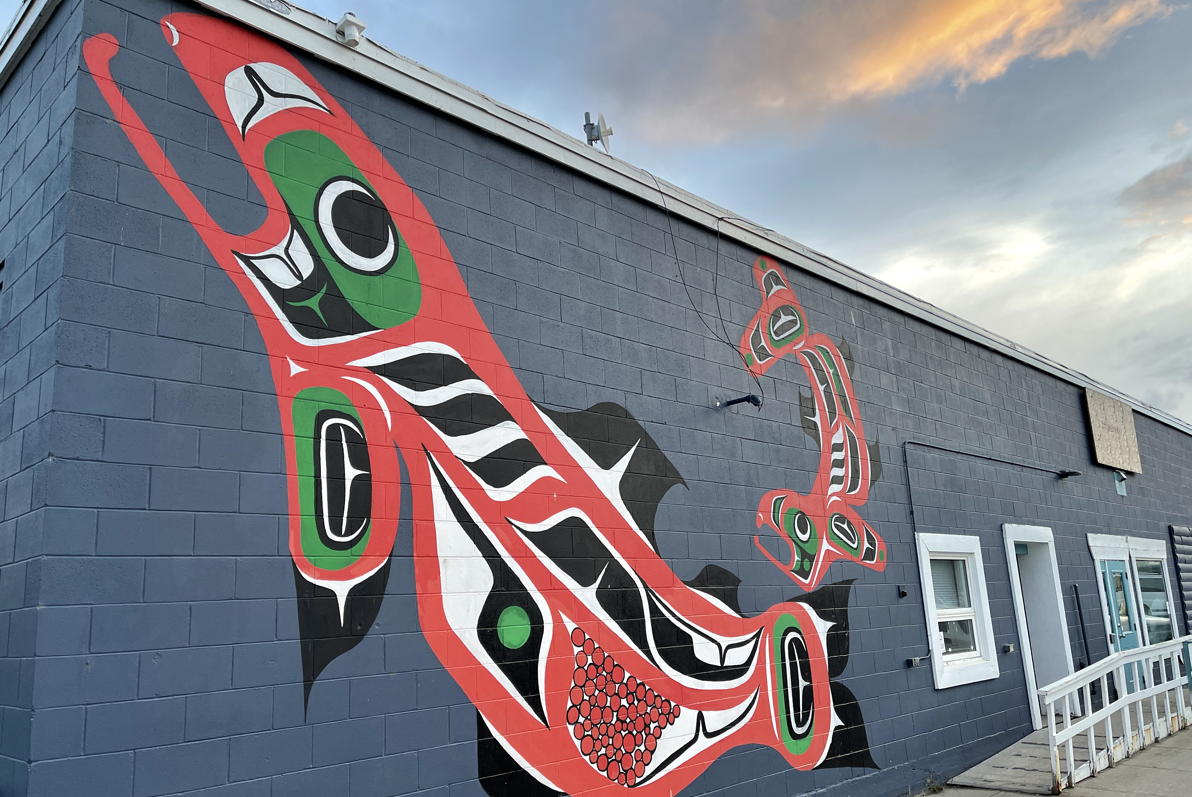 For us newbies, we get the lay of the land at the MacBride Museuma modern edifice of glass and corrugated steel built around a prospector’s log cabin.

“We are an introduction to the people and territory of the Yukon,” says the museum’s Executive Director Patricia Cunning.

We quickly get a deeper sense of the Yukon – the First Nations people who came here 15,000 years ago, the impact of colonialism (“the Yukon has no treaties; it has a land claims system”), the gold rush, Hollywood tales of the north (framed posters like Jack London‘s Queen of the Yukon grace the walls), and a natural history section that includes the museum’s famous albino moose. 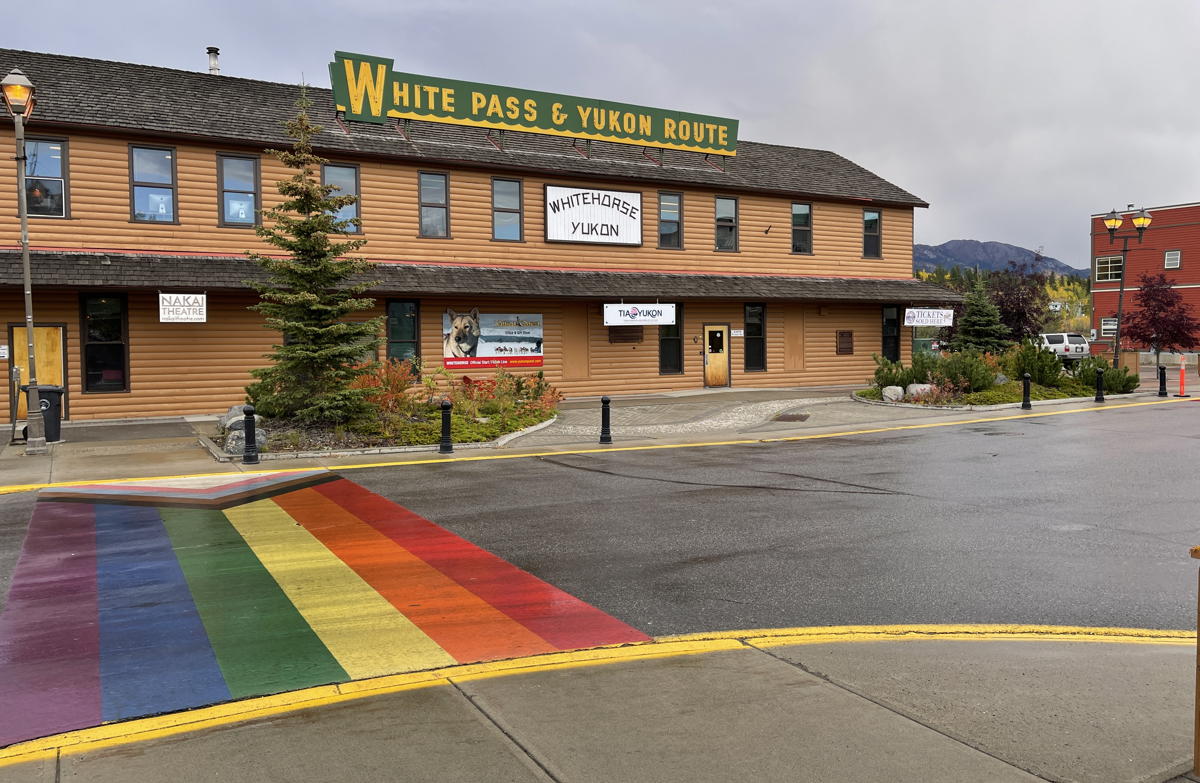 They also have a super fun women’s washroom with glamazons on the doors, taken from the founder’s personal postcard collection, making for a “sexy accessible stall.”

“When we expanded the museum, accessibility was important,” says Cunning, “but we know there’s room for improvement.”

It’s an admission to be echoed often on the FAM from various operators, including Parks Canada.

At Kathleen Lake in Kluane National Parkthe chill waters beckon and several FAM fools (PAX included) go in up to our shines.

Meanwhile, Bolt and Gaudet ably maneuver the rocky beach – both are confident athletes – but partaking in the water would be a challenge without some accessibility modifications (some beaches have installed mats with a guiderail to help people with mobility limitations). 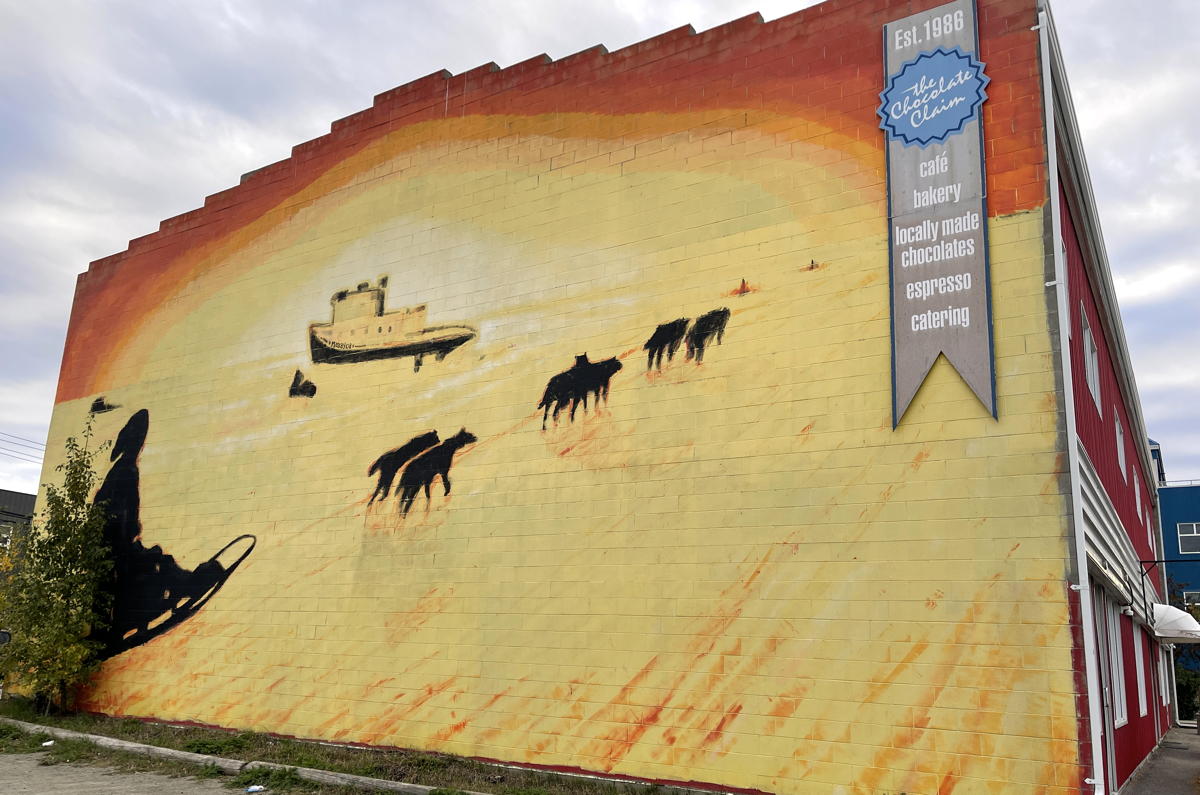 There is about a 300-metre boardwalk that leads into the surrounding forest, curves around the lake, and ends at a dock.

When Parks Canada talks about replacing the aging boardwalk, SoulFly is quick to recommend “narrower spacing between planks so wheelchair tires won’t get caught when turning around.”

It’s one way SoulFly is continuing to push for better infrastructure, and they’re now confident in offering the Yukon as an accessible destination. 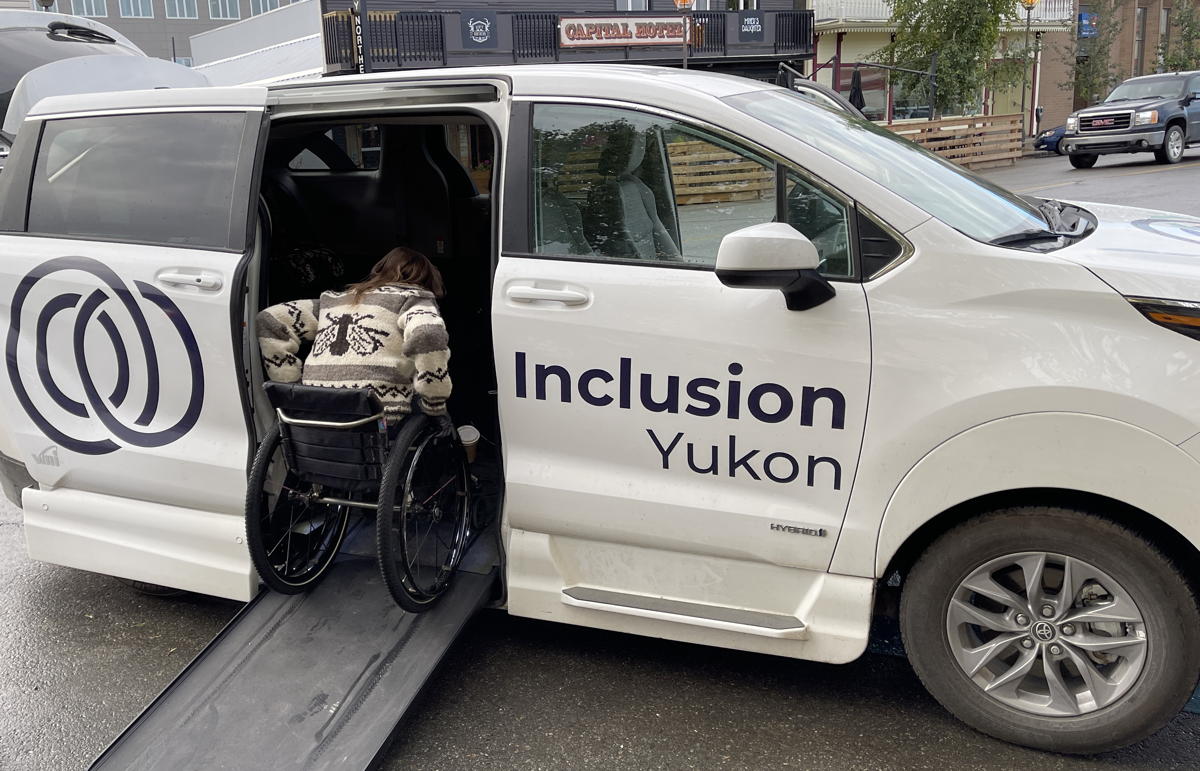 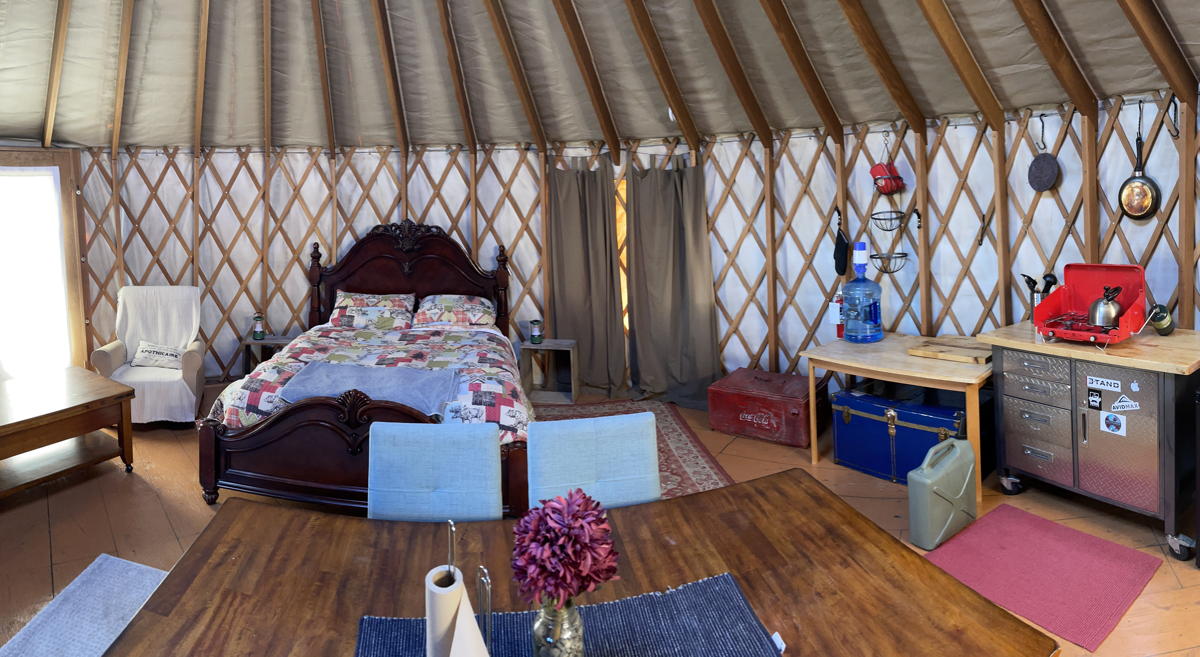 It helps that they can source adaptive rental equipment, including mountain bikes and trikes, through Bolt’s BC charity, Rad Society, and they’re working with places like Mount Logan Lodge to offer accessible wilderness accommodations and/or excursions.

“The point is to not feel different, to not feel special,” Bolt says. “Having the right equipment can help you just do what everyone else can without thinking about it.”

That said, her disability lens is clearly on for this FAM. We stay in Whitehorse at the Best Western Gold Rush Innwhich SoulFly has also helped become accessible. 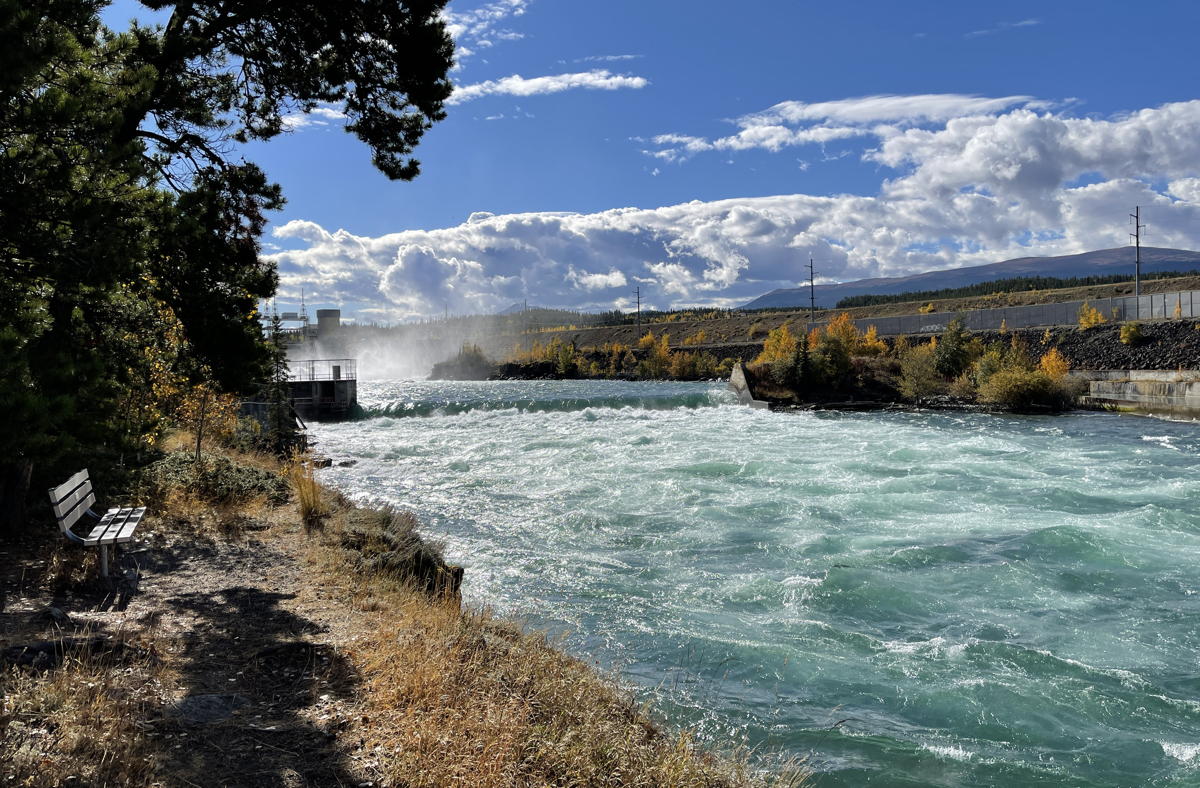 Bolt uses an App to measure the grade on the ramp in the lobby, which seems to be slightly steeper than guidelines.

Still, it’s a solid, central homebase for day trips and checking out Whitehorse itself.

While the capital’s outskirts has some big box sprawl (yes, there’s a Walmart, and the new Dairy Queen is popular), downtown is easy to get around by chair or on foot, and has the cozy charm Banff lost long ago.

“People are surprised by the gastro scene,” says SoulFly.

There are five local breweries, including PAX favourites Two Brothers and Woodcutters Blanket (the latter “never brews the same beer twice”); Wayfarer Oyster House is packed because of its foodie fare and specialty cocktails like the LaLaLavendar; each morning, we enjoy lattes and a treat from Baked Cafe. 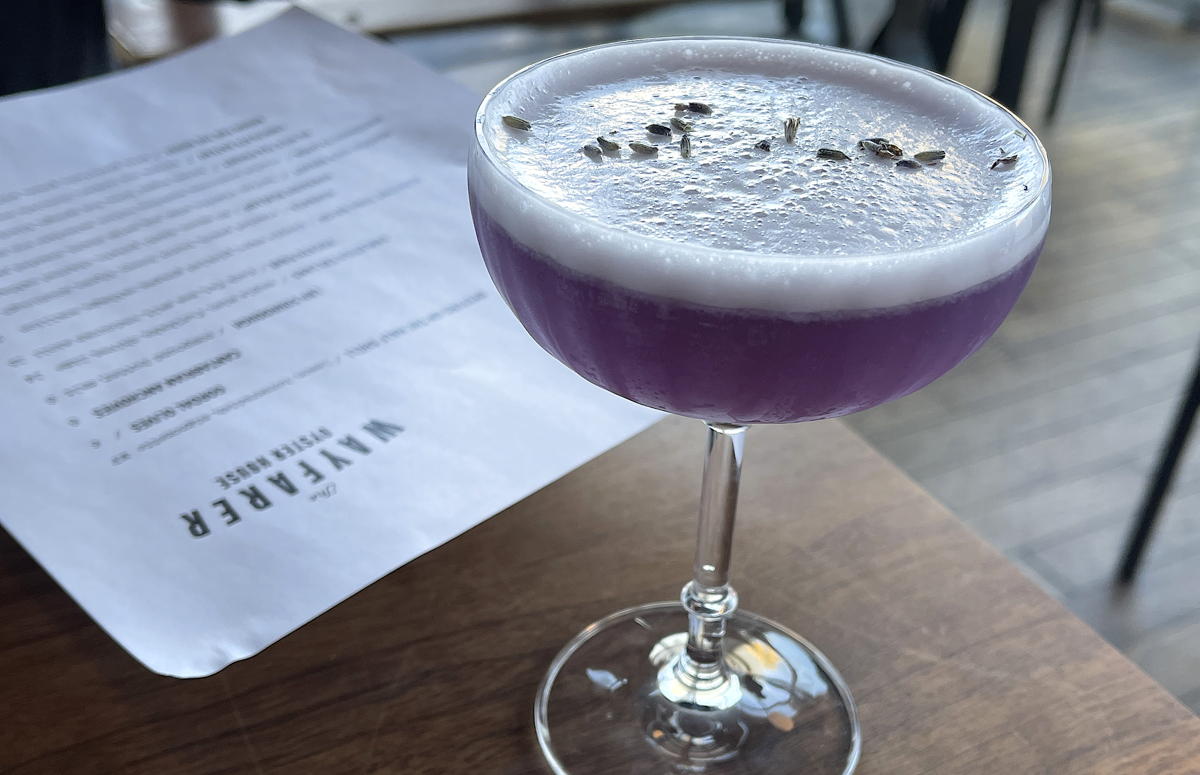 SoulFly has a knack for finding and sharing these local gems – and personalities.

We spend several hours riveted by Karen Nicloux, who does embroidery, beading, and other traditional First Nations crafts.

She does workshops for tourists and “bespoke” custom pieces, including items tailored to people and their disabilities, such as adding a zipper to mukluks (helpful for people who don’t have feeling in their feet/lower legs), shortened sweaters to avoid bunching in a wheelchair, or special mitts for someone with arthritis who can’t open their hands.

“Not everyone’s comfortable making those kinds of adjustments,” SoulFly says. 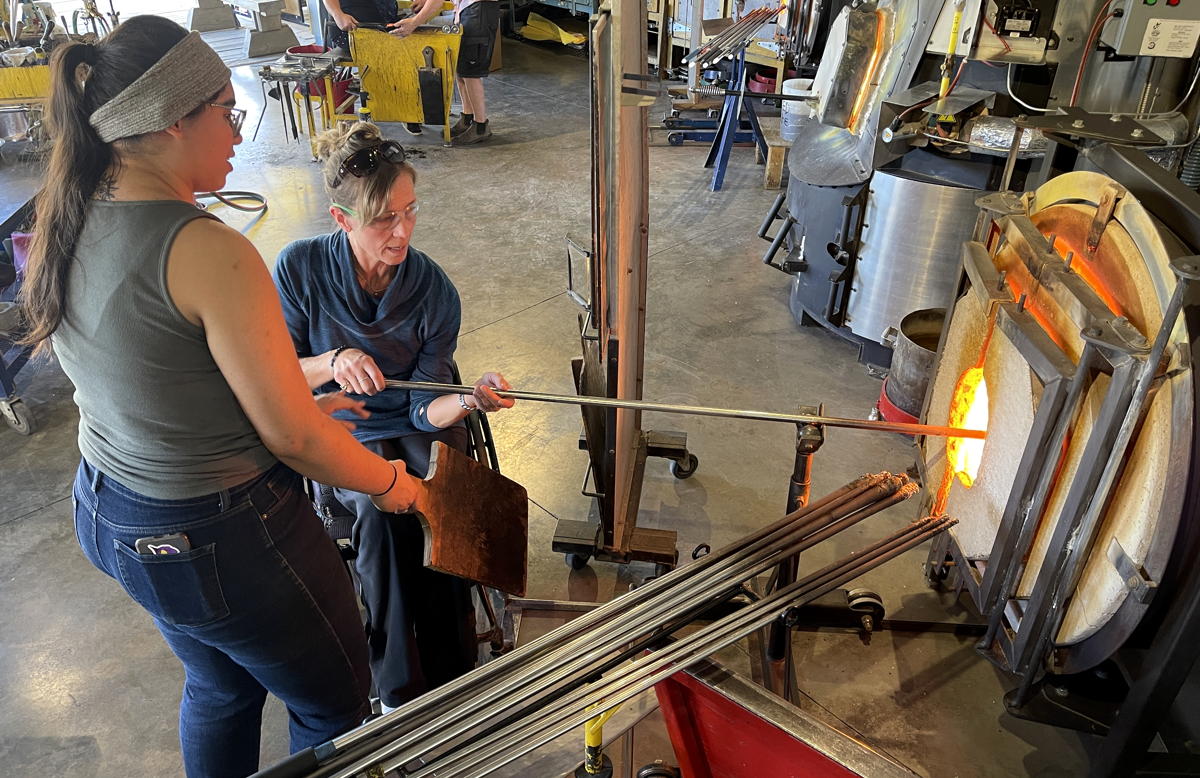 at Lumel Studioswe are guided by the able staff in bringing blown glass visions of birds, mushrooms, and flowers to life.

On a sunny and slightly brisk afternoon, we follow Whitehorse’s Millennium Trail amidst urban forest alongside the Yukon River.

By night, we enjoy starry skies at Eclipse Nordic Hot Springssoaking in the natural heated and mineralized waters of the north.

The brand-new facility recently got into the Guinness Book of World Records for its frozen hair contest, and are looking into offering what promises to be an incredibly Zen (and accessible) steamy Northern Light viewing opportunity. 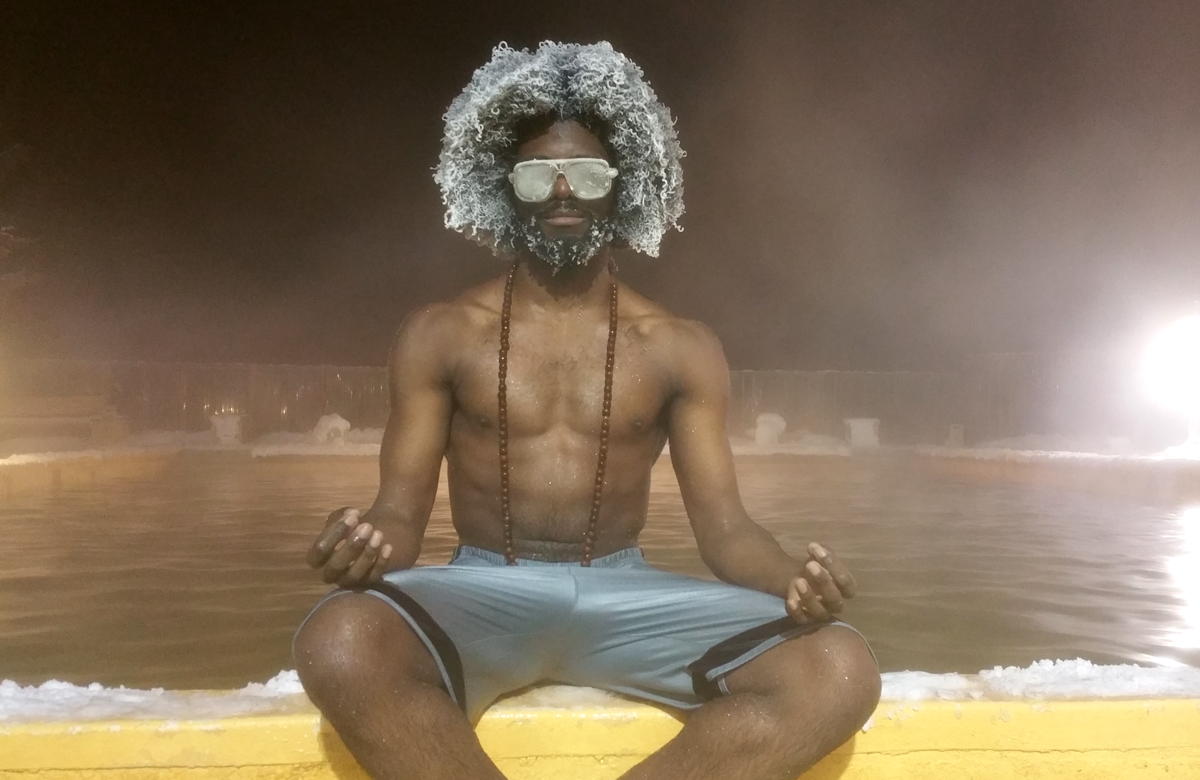 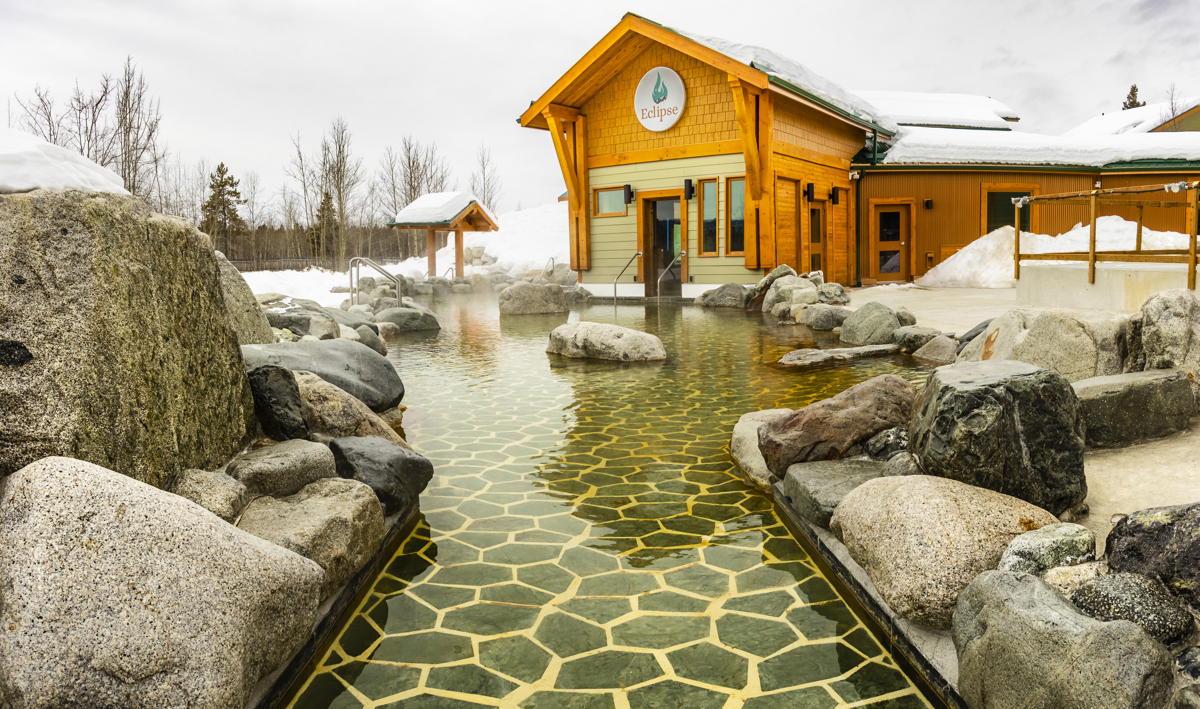 They are deeply influenced by Japanese sensibilities, which inspired them to create shallow, lie down pools rather than standing or floating. They are mostly accessible, including ramped pool entries.