Visitors to Straits and Cheboygan state parks can look forward to new camping amenities and greater conveniences, thanks to a slice of the $250 million in American Rescue Plan Act funds dedicated last March to support Michigan state parks and trails.

In June, the Michigan Department of Natural Resources announced these ARPA-funded projects as two of the first 11 “shovel ready” state park projects to get underway.

“The bipartisan Building Michigan Together Plan made some of the largest infrastructure investments in Michigan history, including the biggest one-time investment in our state parks ever,” said Gov. Gretchen Whitmer. “Today’s combined $2.96 million investment in Straits and Cheboygan state parks will have an estimated economic impact of $12 million on local economies and improve facilities at both parks, making them more accessible to families. Parks are vital to the Michigan economy, supporting tens of thousands of recreation and tourism jobs, generations billions in economic values, and offering Michiganders and visitors special places to make memories, explore the outdoors and enjoy time with loved ones.”

Efforts at the two parks include:

The upper campground buildings were demolished earlier this month. The plan is to complete framing and sheathing before winter and work on the interior throughout the winter months. The project is set to wrap in late June 2023, with the campground open to campers after the Fourth of July weekend.

“The recent demolition at Straits State Park is significant,” said DNR Parks and Recreation Chief Ron Olson. “The work officially sets into motion a historic level of investment – ​​made possible through federal relief funding – in Michigan’s state parks and recreation system. The work both at Straits and Cheboygan will mean better, more comfortable overall camping experiences.”

The first phase of construction includes $750,000 that will be used in Cheboygan State Park, in Cheboygan, to upgrade electrical and water distribution systems in the modern campground. The project includes the replacement of below-ground water mains and electrical conduit, meters and distribution panels, as well as upgraded jug fillers and electrical pedestals. An additional $2 million is proposed in later phases for further investments in the sewer system and replacement of the campground toilet and shower building.

Crews broke ground earlier this month, with a focus now on site clearing and camping pad improvement. Site layouts will continue this fall, including setting the locations of power pedestals and jug fillers. The dates for new underground pipe and wire installation are yet to be determined. This phase of the electric and water upgrades is scheduled for completion in May 2023, with the campground set to reopen to welcome campers by the Memorial Day weekend.

A total of $250 million in federal relief funding was made available to the DNR to help address a long list of critical needs in Michigan state parks and build a new state park in Flint. These American Rescue Plan Act funds are part of a $4.8 billion infrastructure package outlined in Gov. Whitmer’s Building Michigan Together Plan.

To help the public and media stay up to date on the status of projects and learn more about funding and decision-making, the DNR has created a website at Michigan.gov/StateParksProgress, which includes: 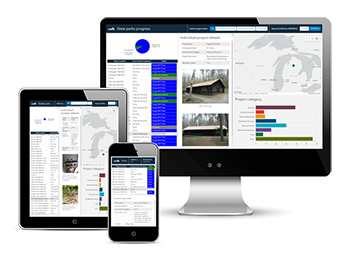