Amidst a blanket of fog, Josh Miller looks over the lip of Laguna a El Junco, a 270-meter-wide wide freshwater lake nestled in the crater of an extinct volcano on San Cristóbal island in the Galapagos Archipelago. Below, Frigatebirds splash in the water, preening their feathers in one of the only freshwater sources on the islands. Miller squats down to get a water sample for his research.

“Before I was even at UNC, I didn’t know that people lived on the Galápagos,” Miller says. “I was really shocked to learn how many people live here, the prevalence of water and food issues, and how much that aligned with my research interests.” 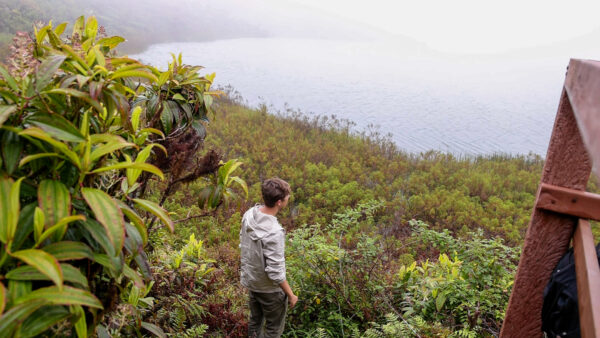 Josh Miller stands on the edge of El Junco, a 270-meter freshwater lake in the Galápagos Islands. (photo by Andrew Russell)

Miller’s research is part of a broader study run by biological anthropologist Amanda Thompson through the Galápagos Science Center (GSC). It represents a collaboration between researchers from UNC-Chapel Hill and Universidad San Francisco de Quito (USFQ), looking at how water and food insecurity on the islands have impacted health outcomes. Thompson believes it may have implications for other island communities.

“What Darwin termed the Galápagos in his journals when he first saw it was ‘a little world within itself,’ and I think that’s true,” says Thompson. “What we’re seeing here is a microcosm of what we’re seeing in other places. So the lessons that we learn here, we can then apply to other contexts, which might be a little bit more challenging to measure.”

The town of Puerto Baquerizo Moreno sits in the southwestern corner of San Cristobal. Most of its 6,600 residents live within 2 kilometers of Bahía Naufragio (Shipwreck Bay). It’s home to an airport, a naval base, and the GSC, where Thompson serves as co-director. 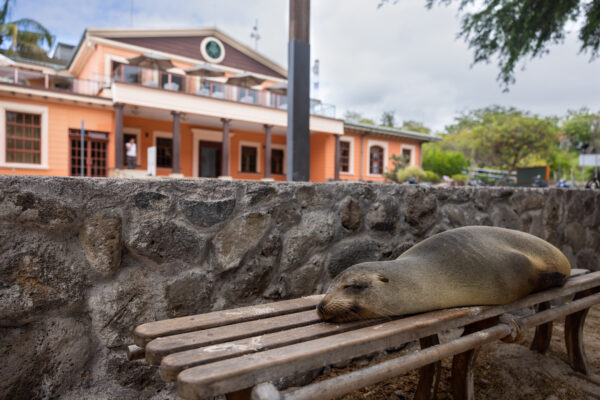 A sea lion sleeps on a park bench with USFQ and the GSC in the background.

She first encountered Puerto Baquerizo Moreno while working on a research project on how birth affects health outcomes in China. At the time, her graduate student, Kelly Houck, was studying water quality and gut health in children in San Cristobal. She invited Thompson to collaborate on a small pilot project with the town’s residents. Later, Thompson went on to conduct a study looking at birth practices and child health in the Galápagos. That’s when she started to get a picture of food and water insecurity on the islands.

“We were in the homes of families, and mothers were telling us how they were concerned about the quality of food or water their children had to eat and drink,” Thompson says. “So we started this project in collaboration with USFQ and the hospital to measure access to water and healthy diets.” 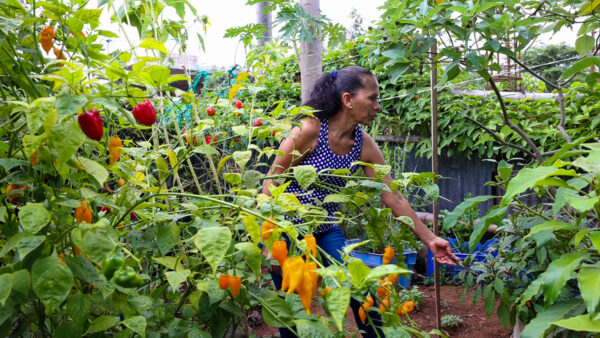 A resident of Puerto Baquerizo Moreno looks at her backyard garden. (photo by Andrew Russell)

“Part of the reason you see that is that people’s diets tend to change faster than infrastructure and water quality, particularly in places like the Galápagos, where you see uneven economic development,” says Thompson. “You see healthy food like fresh fruits and vegetables become too expensive and at the same time people being able to afford things like packaged foods. Together, those changes lead to higher rates of obesity.”

Thompson says many low and middle-income countries about the past 20 to 30 years have experienced that shift.

For decades, farming and fishing were the primary industries in the Galápagos. In 1959, when the Galápagos National Park was established, 96% of the land on the islands was designated for the park, limiting farming activities throughout the archipelago and jump-starting the nascent tourist industry. Tourism started gaining speed in the mid-1980s and exploded in the early 2000s, shifting the economy away from fishing and farming.

“There’s always been some reliance on food shipped in on barges from the mainland, but that increased with the increasing shift from agriculture to tourism-related industries,” says Thompson. “As more tourists arrive, you see more people moving here to answer the demand of the tourism industry. That increases the need for the food on the island as well as dependence on food from the mainland.”

Thompson’s study found that about 70% of adults in the Galápagos suffer from obesity, which is the highest in Ecuador and among the highest in the world compared to similar populations. At the same time, many study participants also experienced gastrointestinal infections, urinary tract infections, respiratory infections, or other chronic conditions like iron deficiency, typifying the dual burden of disease researchers expected.

“What we concluded is that the Galápagos actually suffers from a triple burden of ill health,” says Thompson. “That is, many individuals and households are simultaneously experiencing infectious diseases, chronic diseases like obesity and hypertension and diabetes, and high levels of distress.”

Researchers continue to survey dietary quality and chronic disease risk and collect basic indicators like height and weight. They also measure things like glucose, hemoglobin, and body fat, all to build a comprehensive picture of people’s health on the islands.

Josh Miller prepares samples in the lab at the GSC.

They collect water samples from the houses they visit, drawn from both the kitchen sink and the backyard cistern. They test samples for contamination and determine whether it’s environmental contamination or a marker of potential fecal contamination.

“On San Cristóbal, we have natural freshwater sources and a water treatment plant. It’s the only island with fresh water,” says Thompson. “Previous work by UNC researchers Jill Stewart and Valeria Ochoa and some of our other colleagues showed that the water was clean when it came out of the water treatment plant, but it’s not necessarily clean when it comes out of people’s tap. So we’re interested in water distribution.”

That’s where Miller and researchers like him come in. He’s studied water issues in numerous low- and middle-income countries and has seen firsthand how water insecurity wreaks havoc with the health of a population.

“In every place I have studied, I have heard it multiple times in multiple different languages ​​that ‘water is life’ – water truly undergirds everything that we do,” says Miller.

Miller shares that in the Galápagos, availability is only one of several water issues. People often navigate problems with poor water reliability and quality. It’s a reality Miller has seen during his time on the island. 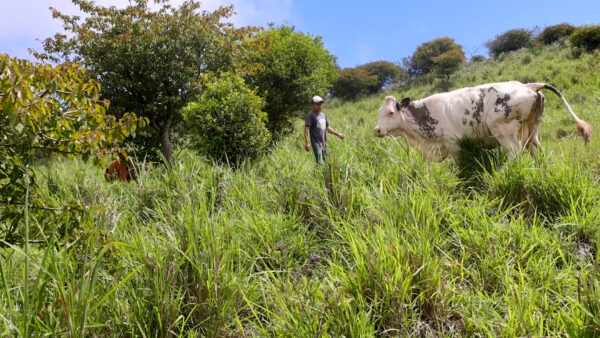 A rancher redirects a wayward cow on Hacienda Tranquila, a ranch in the highlands of San Cristóbal that practices sustainable animal husbandry, organic gardening, and outdoor classroom activities with local schools. (photo by Andrew Russell)

“Many households know that the water isn’t necessarily safe to drink, so they purchase bottled water, yet they might still cook with tap water, or bathe with it, so we see these skin rashes or other health outcomes related to poor quality. When issues with availability and quality co-occur in the same household, folks are much worse off.”

Some people who experience water insecurity in the Galápagos tap into an “unseen” system for borrowing water, according to Miller. He witnessed similar methods for coping with water problems in communities in Kenya. People are trying to think through how to value and manage water in a way that’s just and equitable but also helps people conserve it.

“If you run out of water, or you don’t have enough clean water, you might go ask your neighbor to borrow water in the same way that I go ask my neighbor for a cup of sugar,” he says.

Much of Millers’ work is done in tandem with the Puerto Baquerizo Moreno government. When he and his team travel to residents’ homes to test the water, they are often accompanied by an official from the municipality. Miller is hopeful that his data will help.

“We have the mayor’s office and municipality involved so that hopefully the findings we are generating don’t just stay in a lab or some stuffy scientific publication, but are being implemented at the policy level.”

He’s grateful to see his research tied to that kind of engagement with the people of the Galápagos.

“What I really like about working here is that there is a real sense of community and giving back to the community,” says Miller. “I really appreciate that because sometimes science can operate in a vacuum. But here, people are actually trying to make a meaningful difference.” 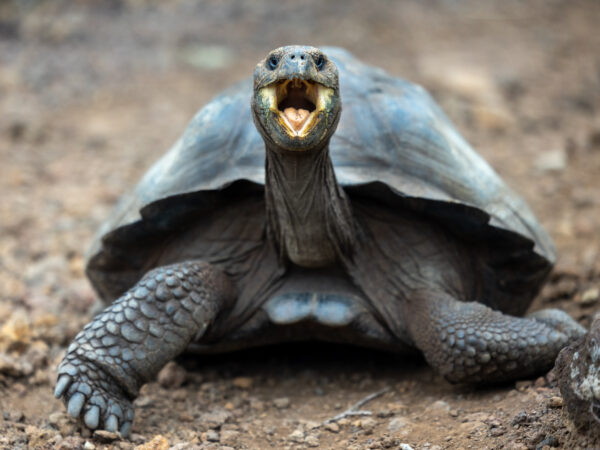 A giant Tortoise greets tourists on the path through La Galapaguera, the largest Tortoise breeding center on San Cristobal island. The breeding center is part of a program across the archipelago to restore native tortoises to the islands. (photo by Andrew Russell)

In the same spirit of collaboration, Thompson is eager to take the data she’s gathered from the Galápagos to other island populations. She’s curious to see if the archipelago’s isolation and tightly connected communities make them unique among island populations or a model to track larger trends.

“Are the health challenges that we’re seeing here in my research similar to what you see in some places like Fiji, which has a lot higher population but also has a huge tourism industry? What about someplace like Vanuatu across the Pacific or across islands more generally?” she asks. “I’m really interested in seeing if we see these associations between food and water and this triple burden of disease in other areas not as easy to measure but facing similar challenges.”