The Prince of Wales immediately ascended to the throne to become King Charles III.

Following the announcement of her death, floods of tributes poured in from the likes of Burberry, Marks & Spencer, Daks and Fenwick, which described her as a “fashion icon” and an “unforgettable female force”.

As a mark of respect, the London Fashion Week schedule will be adjusted to honor Queen Elizabeth II’s funeral, which is expected to take place on Sunday 18 September, or Monday 19 September. Several brands, including Burberry, Raf Simons and Claudie Pierlot, have canceled their spring/summer 23 shows.

Meanwhile, retailers such as Selfridges, Liberty, End Clothing and French Connection decided to keep their stores closed today (September 9) in response to the Queen’s death.

From her Queen’s Award for Enterprise to attending London Fashion Week in 2018, the Queen has had a prolific influence on the fashion industry throughout her seven-decade reign. Several businesses recall how important her role as been on fashion retail.

Corgi’s gift to the Queen

“The Queen always had a good understanding of the importance of textiles and fashion to the British economy,” Chris Jones, co-managing director of royal sockmaker Corgi, which received a Royal Warrant in 1987, says. A Royal Warrant of Appointment is granted as a mark of recognition to people or companies who have regularly supplied goods or services to HM The Queen.

“When I met her once at Buckingham Palace, she proved to be very knowledgeable and interested in what we do. The whole Royal family are great ambassadors showcasing British products across the world, with people worldwide aspiring to wear the clothes that our Royal Family are seen wearing. The new King [Charles III] is also hugely knowledgeable on our industry and shows a personal interest in the products his warrant holders make.”

Jones credits the Royal Warrant with boosting international sales: “The warrant is a superb endorsement of the quality of our products and has helped us hugely to expand our international trade, which now accounts for around 65% of turnover. We sell to over 35 countries around the world and the Warrant is a big part of this. It helps us gain entry to trade shows and arouses the interest of prospective new customers helping us get the first interview. In Japan and China people recognize the importance of the warrant and buy our products as they are assured they are the best quality.”

Jo Smith, general manager and grantee at British luxury fashion house and royal warrant holder Daks, says of the prestige that comes with receiving several Royal Warrants and of meeting The Queen: “The company has been proud Royal Warrant Holders of three Royal Warrants. 2022 is a particularly poignant year for Daks as we had held the Warrant for Her Majesty for 60 years and we have been truly privileged to hold the warrant for this length of time. It has been a mark of recognition for Daks clothing and service over the past 60 years and this has been recognized across our business in the UK and internationally. The Queen visited our then factory in Larkhall, Scotland in 1979.”

First awarded in 1966, the Queen’s Awards for Enterprise, is an awards program for British businesses and other organizations that excel at international trade, innovation, sustainable development or promoting opportunity. They are the highest official UK awards for British businesses, and several fashion businesses have been granted the award since it was introduced. 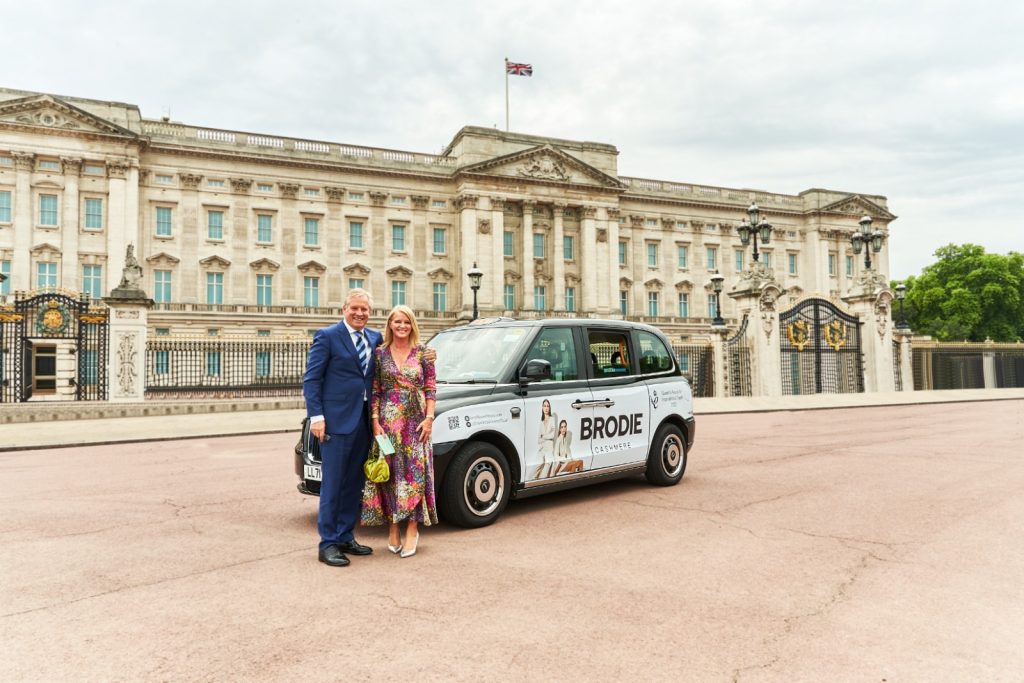 Anne Marie Holdsworth, founder of Brodie Cashmere, says she feels honored to be one of the last recipient’s of the Queen’s Award, which the cashmere brand received earlier this year.

“It was a great honor to win the 2022 Queen’s Award for International Trade and be part of last ever awards during her truly remarkable reign,” Holdsworth says. “As a female-founded British brand, The Queen has always been a style icon and a symbol of pride, grace, and authenticity.

“As a patron of the British Fashion Council (BFC), we have been able to see first-hand how the Crown’s partnership with the BFC has positively impacted the fashion industry, including the likes of our brand. Her effortless charm, and sense of fun is something Brodie always holds true in all aspects of the business. Her recognition and passion in supporting the fashion industry through individual efforts and in choosing Brodie to win The Queen’s Award will continue to inspire us for years to come.”

Meanwhile, Marc Granditer, managing director of Base Childrenswear, says the Queen has helped bring tourists to London and the UK, which is vital for businesses: “It was with great sadness that we received the news of The Queen’s passing on Thursday. As a retail business based in London, tourism plays an essential part in many businesses, and the royal heritage plays a central role in attracting tourism.

“The Queen has been the figurehead and the face of the UK for all our lifetimes, and it is only when something that one takes for granted is no longer there that we fully appreciate their worth. So it is the Queen, who through her global popularity, and with her quiet dignity, has made London and many parts of the UK a magnet for global tourism.

“On a more personal note, her passing has affected all employees at Base in a way maybe one wouldn’t have expected, uniting the generations with a common sense of loss that has left everyone feeling rather unanchored by the unfamiliarity of a future without The Queen.”

During her reign, The Queen has – somewhat unintentionally – played a huge part in British style and trends.

She carved out a sartorial handwriting that is intrinsic to her identity, aided by a host of advisors, stylists and designers. British fashion designer, dressmaker and milliner Mary Angela Kelly has served as her personal assistant and senior dresser since 2002. 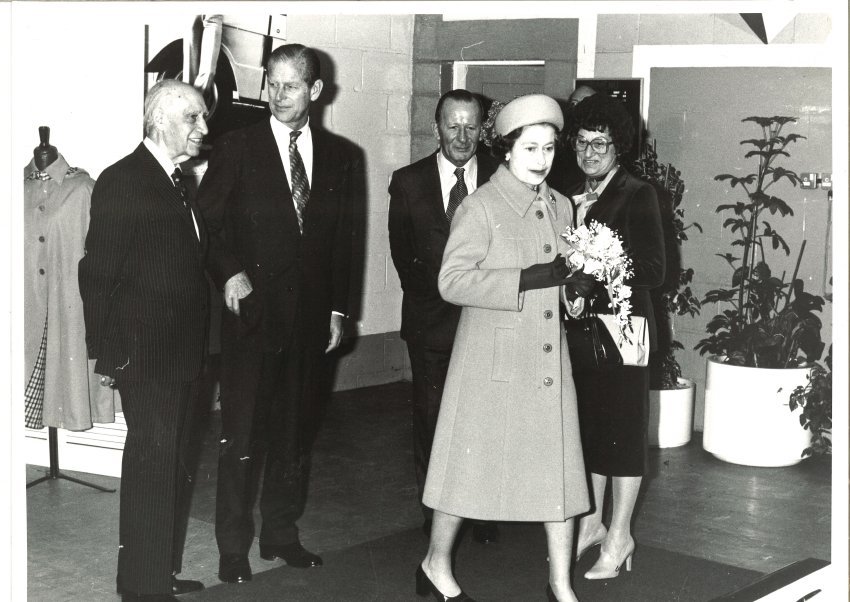 At London Fashion Week in 2018 Caroline Rush, chief executive of the British Fashion Council, famously labeled her a “fashion icon”.

Brodie Cashmere’s Smith says: “Her Majesty’s style was classic and timeless and evolved over the years. She always remained loyal to many brands and embraced new ones with a personal style that was admired globally.”

Miranda Holder, royal and celebrity fashion expert, says: “As one of the most photographed women in history, HRH Queen Elizabeth II was a thoroughly modern Monarch who leaves a legacy behind her across the world and also in fashion.

“The Sovereign’s sartorial roots were relatively humble, ascending to the Crown in the austerity-depressed post-war 1950s, her sensible and modern wardrobe reflecting the nation’s mood of make do and mend. Her iconic wedding dress, which designer Norman Hartnall intended to be the most beautiful he had ever made, was famously paid for with rationing coupons and made in the Dior-inspired ‘fit and flare’ silhouette of the time which suited her petite frame. The dress, embroidered with wheat, roses and star flowers to inspire hope and unity was her first foray into diplomatic dressing, for which she became famous.

“Having eschewed the revolutionary styles of the swinging 60s, in the 70’s the Queen took full advantage of the rise of color photography and mastered the art of using fashion as a gesture of goodwill. Nicknamed the ‘Million Mile Queen’ due to being so well traveled, she would surprise and delight her receiving countries by weaving their national colors and emblems into her outfits. Unlike her predecessors The Queen’s image was consistently splashed throughout the world thanks to modern media, and she understood the power of fashion to communicate layered messages to her subjects, family and guests, something which is emulated by Royals worldwide today.”

She adds: “In the 90’s Angela Kelly joined the Palace fold and becoming lead dresser, revamping the Queen’s look into the sleeker, vibrant, more youthful image that is so comfortingly familiar to us all today. The two women formed a formidable team, and her Majesty would take an active interest in every detail, having intimate knowledge of what would work best.

“Unfalteringly consider of all around her, The Queen embraced color partly due to the inherent symbolism and partly so that she could be easily spotted by her subjects in the crowds. She is famously quoted as saying ‘if I wore beige noone would know who I am’.

“The Queen fully understood the power of accessories and was, never knowingly without her trademark Anello & Davide or Ferragamo loafers, previously worn in by Angerla Kelly to ensure her comfort, her beloved Launer handbags (whether they actually contained marmalade sandwiches as Paddington bear might suggest we will never know), her matching Rachel Trevor-Morgan hats which added height to her petite frame and framed her face, and of course her matching Fulton umbrellas. She was equally amused to have a Barbie doll made in her image in honor of her Platinum Jubilee.

“But perhaps the Queen’s most enduring legacy in fashion is the Queen Elizabeth II Award for design, bestowed annually by the British Fashion Council to promising talent at London Fashion Week, which the Queen attended personally, sitting in the front row with Anna Wintour in 2018 .”

Emily Gordon-Smith, content director at fashion analyst Stylus, also tells Drapers of Her Majesty’s style influence: “One thing worth recognizing is that back in the day she really did celebrate British designers – Hardie Amies, Norman Hartnell, for day events and celebrations – supporting, establishing British talent on the global circuit, which is worth celebrating. 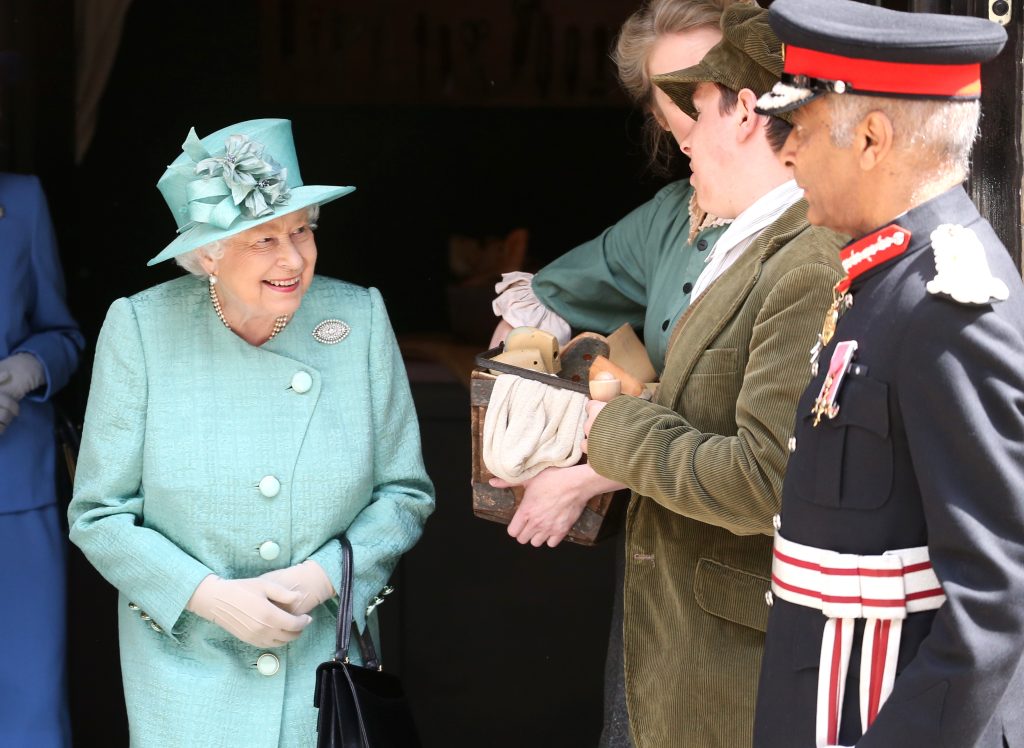 “She made a formula for dressing her signature, very much establishing a uniform which was very authoritative but incredibly feminine – think about things like the Launer signature handbag she was holding even this week. A judiciously chosen broach which held lots of meaning, the pearls – then of course the bold colour, the head to toe signature look which really resonated with other members of the royal family and consumers alike.”

She continues: “I think equally important for the fashion industry more broadly was her love of simple dressing, country living – equestrian style and heritage apparel was where she would look most comfortable – Hermés headscarf, button up cardigan, kilt or skirt – very much how she felt most comfortable dressing – you even saw that in the last photos of her this week.

“That casual emphasis of her country wardrobe will be forever enduring and will be impactful – as well as her more glamours attire.”