It’s been 25 years since Princess Diana’s death, and like her extraordinary legacy of charitable efforts and advocacy work, her iconic style will live on forever.

“Bold,” “ever-evolving” and “confident” are just a few words historians have used to describe Diana’s distinctive fashion choices, which led her to become one of the most influential style muses of all time.

Her looks not only left an imprint on royal fashion history but also gained worldwide acclaim.

“More so than any specific piece she wore, I think it is Princess Diana’s approach to fashion that has inspired a new generation of fans today,” Elizabeth Holmes, journalist and author of “HRH: So Many Thoughts on Royal Style,” told ” Good Morning America.” “With her range of styles and her willingness to embrace bold colors and silhouettes, Diana made royal style exciting.”

“It’s [was always] exciting to see what the Windsors would be wearing, but Diana added the element of surprise,” she continued. “You never knew what she was going to be wearing when she stepped out of a car. Her sartorial spirit and sense of adventure is palpable in the photographs that we see on social media today.” 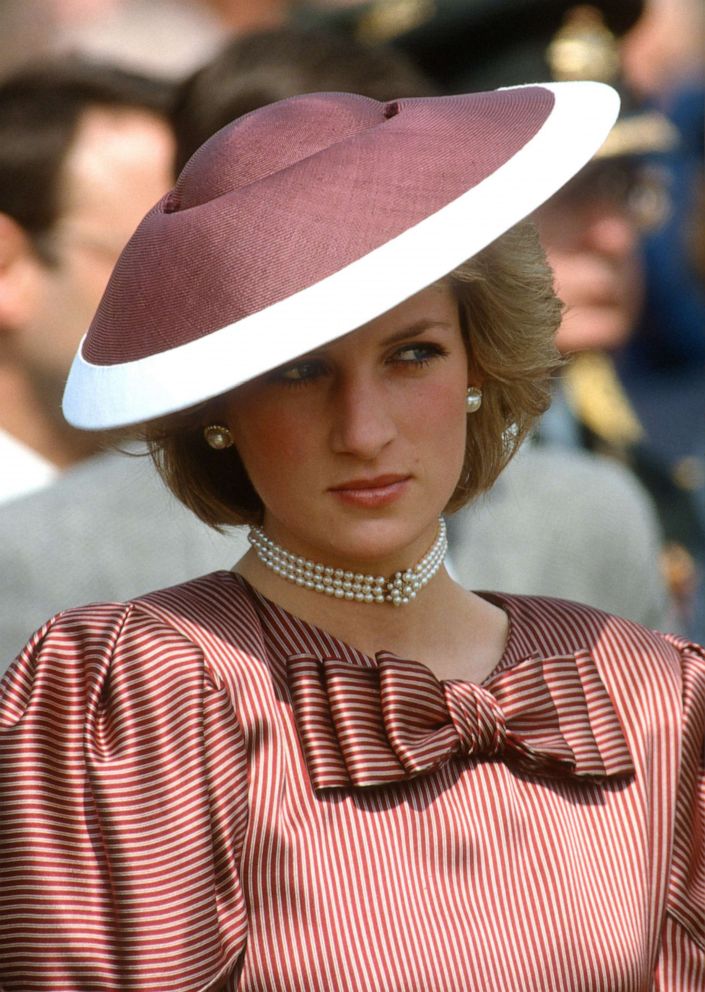 Diana, Princess of Wales, wears a maroon striped dress with a bow designed by Catherine Walker and a flying saucer style hat designed by Frederick Fox, visits Beach Head Cemetery to honor those killed in the Allied landings of January 1944, on April 28, 1985 in Anzio, Italy.

Looking back through images of one of the most photographed women in the world, it’s apparent that her unique style — whether casual, trendy or high-fashion elegance — had a timeless flair.

“So much of what she wore was specific to that time period, the oversize silhouettes of the 1980s and 1990s,” Holmes said. “But looking back, it doesn’t feel dated — and I think that’s because of how she wore it.”

More than two decades after her tragic death, fashion spectators old and new are still being exposed to Diana’s style aesthetic through designs like the late Virgil Abloh’s spring 2018 collection, which included everything from pearls and polka dot patterns to seamlessly structured silhouettes and alluring accessories, and was inspired by Diana herself.

“She was a strong individual that, despite her position, had her own personal taste and it came out through the clothes — there is no stylist at play here,” Abloh told British Vogue in September 2017 of his collection’s muse.

“Her personal taste was very out of the way from what she was supposed to wear.” 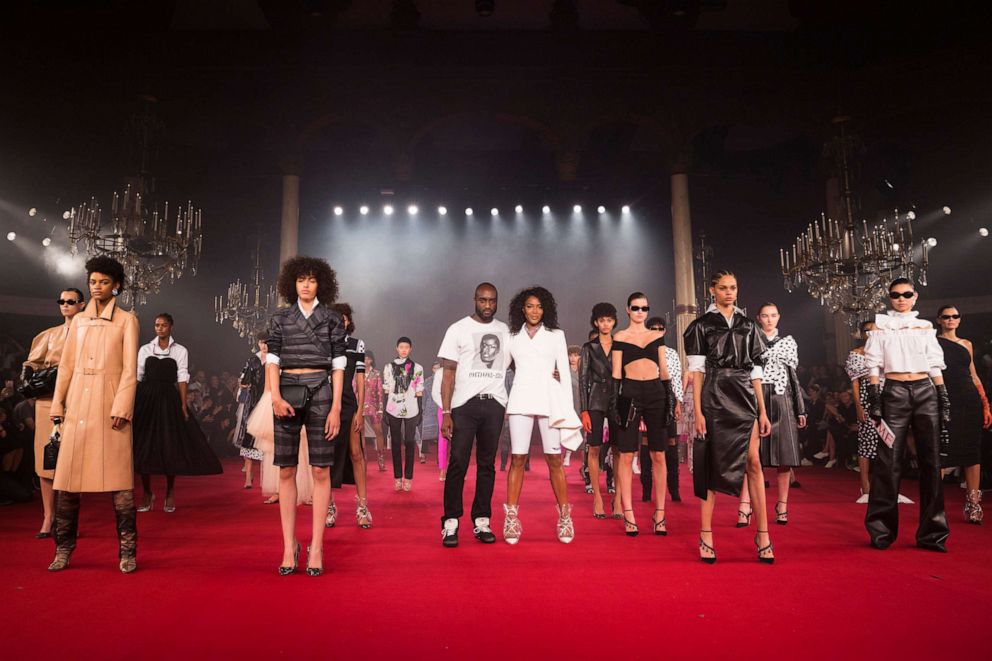 Designer Virgil Abloh, Naomi Campbell and models acknowledge the audience during the Off/White show as part of Paris Fashion Week Womenswear Spring/Summer 2018 on Sept. 28, 2017 in Paris.

Fashion journalist Eloise Moran, who authored “The Lady Di Look Book,” was only 5-years-old when Diana died, but is a committed follower of her fashion ethos. She started her Instagram account @ladydirevengelooks four years ago after finding a trove of the amazing ’90s off-duty-style outfits worn by the late princess of Wales.

After consistently posting her findings, the account grew, with more than 118,000 engaged followers to date.

“At the beginning, the photos made me interested in what she wore when she was on the street and running around, and it just really surprised me that this princess had such incredible style,” Moran told “GMA.”

“I think there really has been this grand reveal/reintroduction of the princess to a new generation, and I think obviously, we have so much to look at and so much to choose from because she was the most photographed woman in the world,” she added. “So we’ve got this bounty of photos and outfits.”

Speaking further to Diana’s wide catalog of fashion moments, Holmes and Moran elaborated on some of her most significant looks and what made them stand out.

The wedding dress of the century 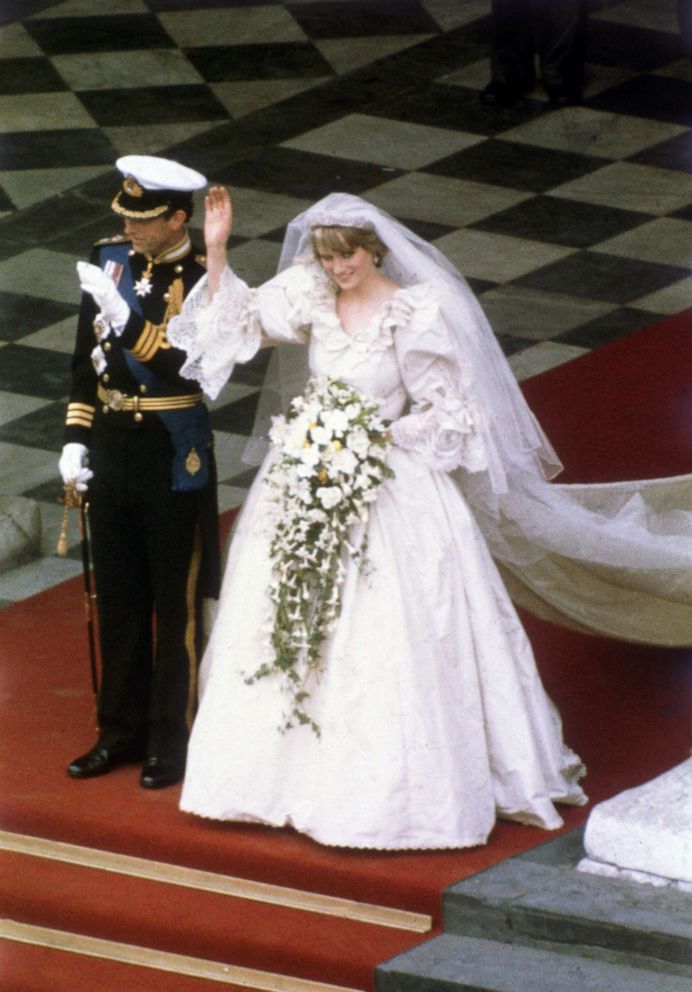 Charles, Prince of Wales, with his wife, Princess Diana on the altar of St. Paul’s Cathedral during their marriage ceremony on July 29, 1981.

For her 1981 wedding to Prince Charles, Diana wore a show-stopping ivory silk and taffeta gown that included a 25-foot long train, an estimated 10,000 pearls and antique lace passed down from Queen Mary. The dress also featured puffed sleeves and a layered, ruffled collar neckline.

“The voluminous, frothy confection was every bit the most princess-y dress of the time, and revealed the naivete of the newly 20-year-old girl who wore it,” Holmes said. “This sealed the storyline of a fairytale, with the heir to the throne finding his princess.”

Holmes also said the rapt attention paid to the famed dress may have foreshadowed the prominent role that Diana would come to play in the royal family later on. 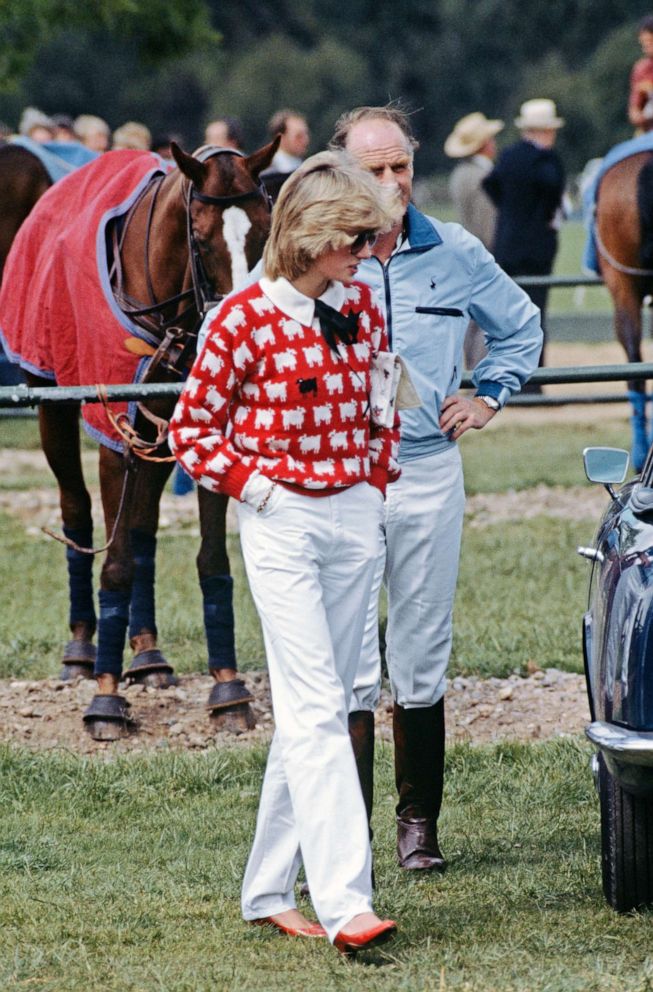 Diana’s famed “black sheep” sweater by Warm & Wonderful was a statement-making pick that she initially wore in 1981 to a polo match before her marriage to Charles. However, experts have pointed out that it was her second wear, after she was officially welcomed into the royal fold, that captured everyone’s attention.

“When she wore the same style again a few years later, which was not a repeat, but a replacement as the first sweater was damaged, she was a bonafide global superstar and fashion icon,” Holmes said. “It was clear she knew exactly what message she was sending as ‘an outsider.’ It perfectly sums up her quite clever approach to clothes.”

what she didn’t wear 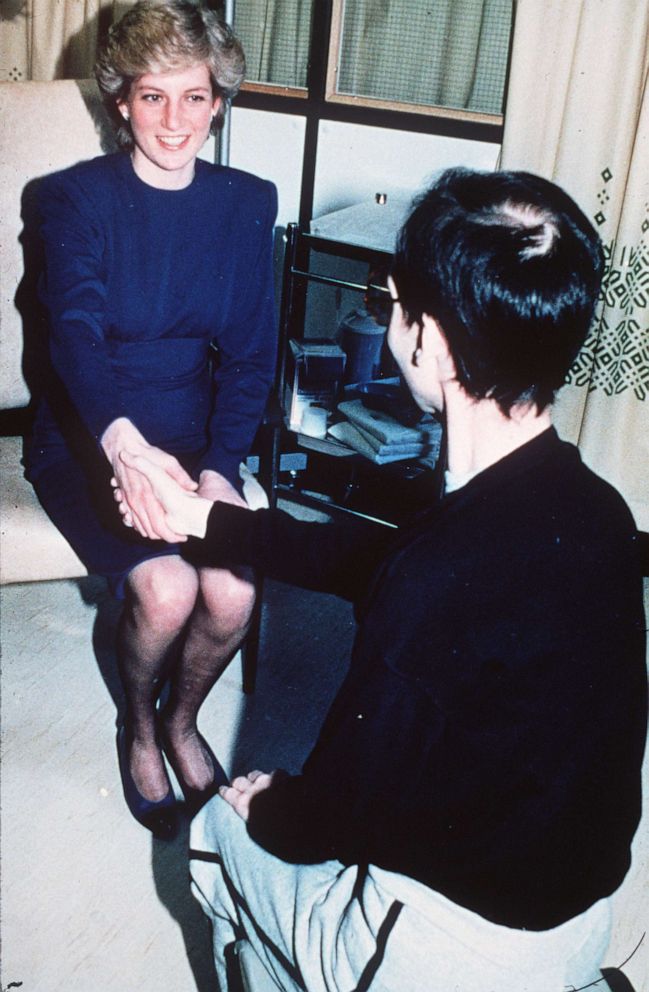 Diana, Princess of Wales shakes hands with an Aids victim as she opens a new Aids ward at the Middlesex Hospital on April 9, 1987 in London.

There’s also plenty of significance in what Diana didn’t wear during her time in the spotlight, particularly while doing charity work.

During a 1987 visit to an AIDS clinic in London, Diana chose not to wear gloves while shaking hands with people, “which was a huge deal at the time” and not in line with royal protocol, Holmes said. 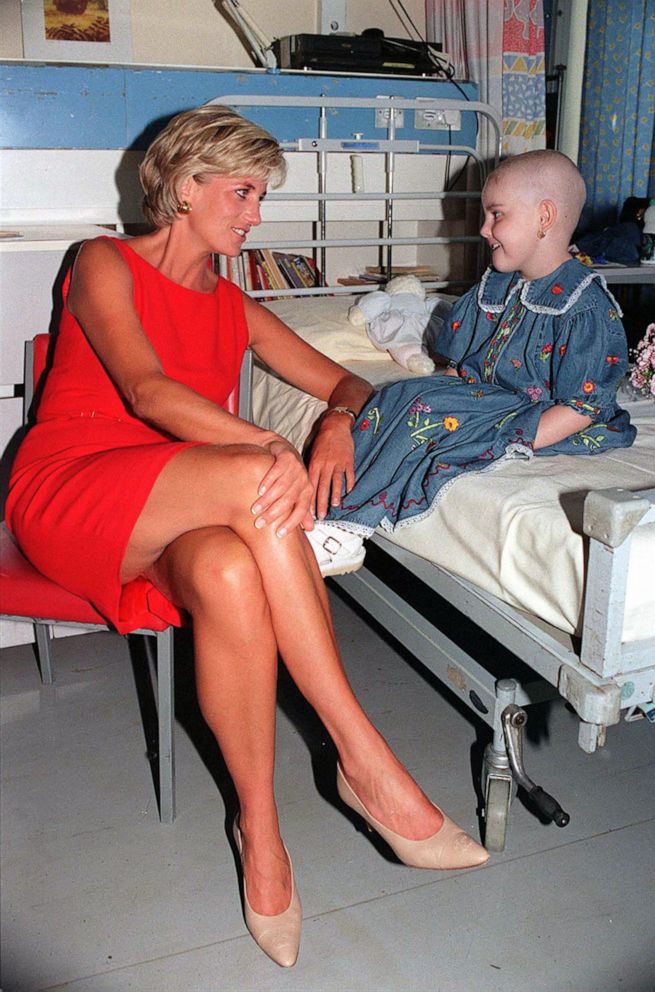 Diana, Princess of Wales meets Hollie Ann Robinson Marsh, who has lost her hair as a result of chemotherapy, during her visit to Northwick Park Hospital in London, where she unveiled a foundation stone for a new children’s casualty center, July 21, 1997.

Diana adored wearing bold colors and jewels when visiting children. On a number of occasions, she was seen in hard-to-miss reds, pinks and more.

Many archives also show her wearing fun necklaces that children could play with while she held them. 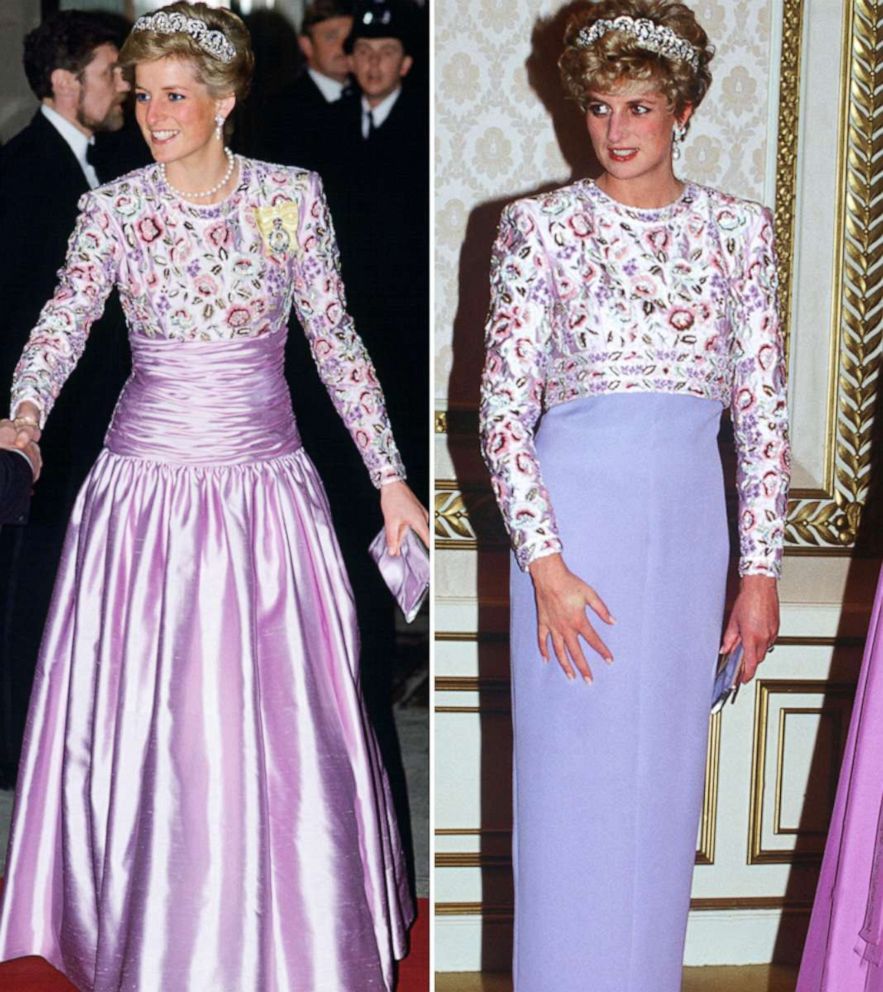 “I loved how Diana repeated and reworked her clothes,” Holmes said. “There is so much attention today on ‘royal repeats’ and Diana was the original repeater.”

In 1989, she was photographed while greeting the president of Nigeria wearing a floral-topped Catherine Walker gown that included a full lavender skirt. A few years later, she paired the floral portion of that dress with a slimd-down pencil-style skirt at a banquet in Seoul, South Korea. 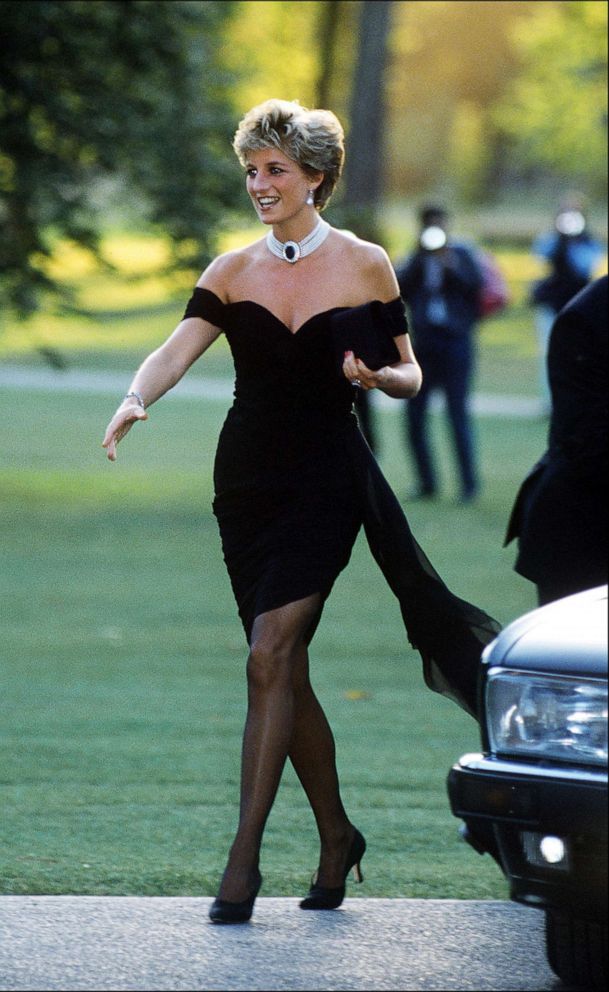 Princess Diana arrives at the Serpentine Gallery, in a gown by Christina Stambolian, in London, June 1994.

In 1994, Diana made major headlines for wearing a striking off-the-shoulder black dress, later known as the “revenge dress,” while attending a Vanity Fair party at Serpentine Gallery in London. She wore the head-turning dress on the same evening that Charles admitted in a televised interview that he’d had an affair.

“It really was the start of a whole new era of dressing for her, unapologetic — and I wouldn’t even say it was rebellious, but it was just her way of saying, ‘I call the shots now. I can wear what I want to wear and I can say what I want to say and do what I want to do,'” said Moran.

“I think the pure nature of how she wore it and why she wore it is really important,” she added.

Diana Princess Of Wales Visits The Hospice In The NorthWestern Memorial Hospital In Chicago on June 6, 1996.

After her separation from Charles, experts noted that Diana’s style continued to evolve in bold, fearless ways.

Moran mentioned her love for Diana’s Versace mini dresses and her “stripped back ’90s minimalism” moments.

“It’s quite glam and the fit is just insane and she’s really showing off her body in a way she never did before, which I think, says so much,” said Moran.

Athleisure before athleisure was a trend 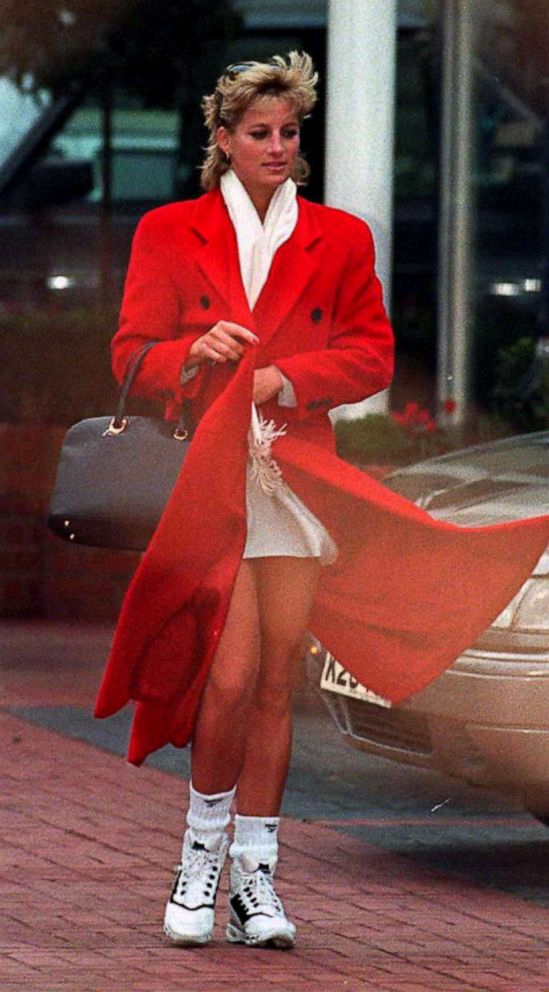 Princess Diana leaves her London health club after her morning workout on Jan. 24, 1996. 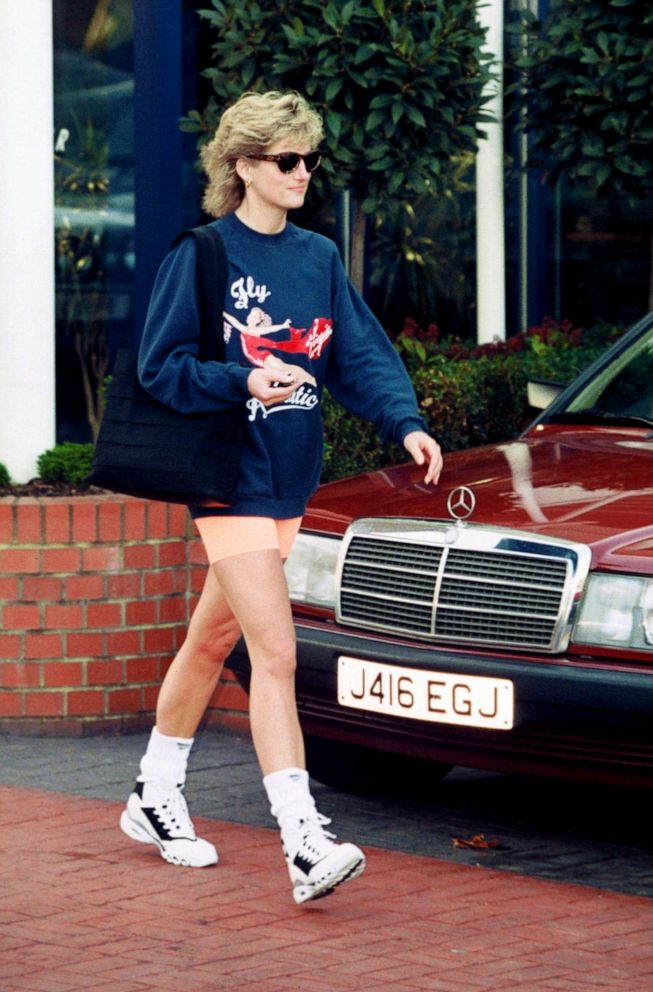 Moran also made mention of Diana’s many laid-back casual looks. During some of her final years before her death, Diana was often spotted wearing everything from sweatshirts and biker shorts with vibrant top coats and sneakers — reminiscent of the ongoing “athleisure” trend of today, a hybrid mix of athletic and business casual wear.

Referring to one of her 1996 looks, where Diana was seen wearing a red coat with sneakers, Moran added, “It looks like she’s wearing nothing under it, which I think is so cool and shows she wanted to be a regular woman.”

“In a way, I also think she was quite influenced by American style in her later years and she actually visited the states quite a lot,” she said, “so she definitely has this savvy, New York woman image to her.”