New Delhi [India]October 3 (ANI): India has received unusual praise from Saudi Arabia’s World Muslim League for its policy of non-violence and tolerance towards all.
The Mecca-based World Muslim League timed its praise for India’s Global and National outlook on Gandhi Jayanti- something which Saudi Arabia-based Islamic Group has never done before.
Hailing Mahatma Gandhi for being a pioneer of the philosophy of non-violence, the Muslim World League, for the first time, paid tribute to Gandhi on his 153rd birth anniversary and said that the day should be an occasion to spread the message of non- violence internationally.

“Today, October 2, we celebrate Gandhi Jayanti to honor the birthday and remember the life of Mahatma Gandhi, a visionary, freedom fighter, and follower of non-violence. Today also is the International Day of Non-Violence,” Muslim World League wrote in a tweet.
It added that October 2 should be used as an opportune day to spread the message of non-violence on an international level. “Every year, the world celebrates the International Day Of Non-Violence, celebrating the life of the pioneer of the non-violence philosophy, Mahatma Gandhi Jayanti. An occasion to spread the message of non-violence internationally through education and public awareness,” it tweeted. 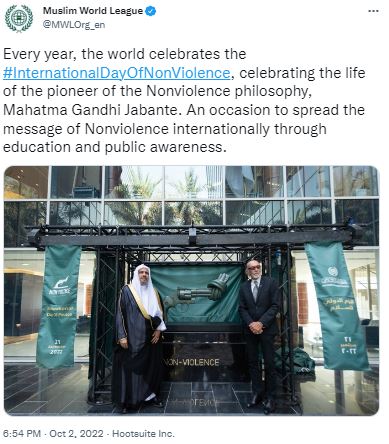 The Muslim World League is an international non-governmental Islamic organization based out of Mecca, Saudi Arabia. Mecca or Makkah is the birthplace of Prophet Muhammad and is the location of Islam’s holiest place Kaaba.
October 2 also coincides with the International Day Of Non-Violence. 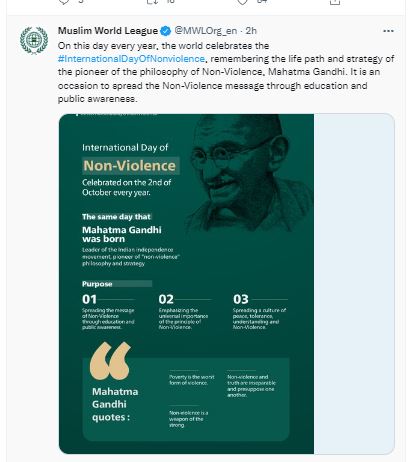 “On this day every year, the world celebrates the International Day Of Non-Violence, remembering the life path and strategy of the pioneer of the philosophy of Non-Violence, Mahatma Gandhi. It is an occasion to spread the message of Non-Violence through education and public awareness.”
The wishes extended by the organization on the birth anniversary of “Bapu” underscores the forging of ties between India with the Muslim and Arab world at large.
Notably, there has been a paradigm shift in the relationship between the two countries under the leadership of Prime Minister Narendra Modi.
The visit of PM Narendra Modi to Riyadh in April 2016 captured the spirit of enhanced cooperation in the political, economic, security and defense realms.
During the visit, King Salman conferred the Kingdom’s highest civilian honor on Prime Minister Modi, indicating the importance Saudi Arabia attached to its relations with India.
The visit of Crown Prince Mohammad bin Salman to India in February 2019 further took forward this momentum. During the visit, it was announced that the Kingdom would invest approximately USD 100 billion in India and six MoUs/Agreements were signed in the fields of investment, tourism, housing, exchange of audio-visual programs, and an agreement was signed to pave way for Saudi Arabia to join the International Solar Alliance (ISA), which was launched by Prime Minister Modi.
Prime Minister Modi visited Riyadh again on October 28-29, 2019, during which the Strategic Partnership Council (SPC) Agreement was signed, which established a high-level council to steer the Indo-Saudi relationship.
Twelve MoUs/Agreements were signed during the visit across several fields, including energy, security, defense production, civil aviation, medical products, strategic petroleum reserves, small and medium scale industries, and the training of diplomats. During the visit, PM Modi also delivered the keynote address at the Third Future Investment Initiative Summit. (ANI)