Colorado hotels named a Top Hotel in The Southwest & West:

Ranked #9 Clayton Member’s Club & Hotel, which debuted in May of last year, was the only hotel in Cherry Creek to make the list. The first of its kind, Clayton Members Club & Hotel is a 63-room boutique hotel, providing stylish, well-appointed rooms with touches of Denver-inspired, mid-century décor, approximately 5,000 square feet of indoor meeting and event space, and convenient access to the city’s best shopping, dining and more. In addition to three public culinary outlets – Kini’s, featuring light, Greek island dishes, approachable wines, and a wide-ranging cocktail list; Cretans, a lively, energetic wine bar with a seasonal list of by-the-glass and bottle options, plus cocktails and bites; and Five Nines, a hidden lounge with live entertainment – ​​guests have access to the physical and experiential amenities of Clayton Members Club. Designed to cultivate connection and creativity, these include a members’ restaurant, fitness amenities, social spaces, lounges and co-working areas, as well as a rooftop restaurant and pool, replete with expansive views of Downtown Denver and the Rocky Mountains.

The Crawford was also recently touted as one of the “15 Most Romantic Getaways to Help Couples Reset” by TODAY.com and “10 Hotels to Know Right Now” by Fifty Grande.

“We are honored to be celebrated alongside so many fantastic Western hotels by the readers of Condé Nast Traveler,” said Ed Blair, area general manager overseeing Denver Union Station and The Crawford. “We have worked hard this year to establish partnerships with other top destinations here in the Mile High City – including Meow Wolf, the Denver Zoo and The Beer Spa – as we know that travelers are seeking out unique, local experiences. 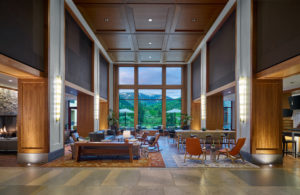 The newly refreshed lobby at the Westin Riverfront & Spa, Avon.

The Westin Riverfront Resort & Spa Avon, Vail Valley: Located in the heart of Colorado’s Vail Valley, The Westin Riverfront is ranked #3 in the Top 20 Resorts in the Mountain West category, touted for its “excellent location by the lifts,” extensive amenities including “amazing hot tubs and pool” and a “fantastic and friendly” staff.

“We are very honored for this recognition and grateful to everyone who has supported us,” said Brian Harrier, general manager of The Westin Riverfront. “We have completed several major renovations at the resort this year – from upgrading our Athletic Club with amazing new TechnoGym equipment to launching a delicious new restaurant concept with Chef Richard Sandoval. The snow just started falling on the high peaks this weekend and we are getting excited for another fantastic ski season here in Colorado.”