HUNTSVILLE, Ohio — An invasive species of vegetation is causing headaches for anyone who visits Indian Lake. Locals are worried the problem is growing out of control because it’s not only choking out boat motors, but also the tourism industry.

What You Need To Know

​​Business is slower than usual at La Playa Azul, a Mexican restaurant on the waterfront.

South said she’s had to limit staffing, freeze hiring and reduce the restaurant hours due to fewer people coming in.

“The tables all full, the patio all full, we haven’t had any of that this year,” South said. “For area businesses like the lake we depend on our summer. People and our summer money to thrive us through the winter.”

One of the few patrons at the bar is longtime visitor Richard Wehrle who was practically born at the lake.

“I came here two days after I was born in 1964,” Wehrle said. “Came down here with our doctor, been coming here ever since. Probably the best place I come down to fish.”

Wehrle is an environmental project manager that’s worked on many cleanup efforts in the US, including the Deepwater Horizon Oil spill in 2010.

“When we were on that spill for six months straight, 24-seven,” he said. “That’s how they have to address this water issue right now. Unless you’re here 24-seven, you’re never going to rectify this issue.”

“This is the worst I’ve ever seen this since I’ve been coming down here for 53 years,” he said. “It’s like a bad disease; it just keeps spreading.”

To better understand what’s going on, Gov. Mike DeWine and the Ohio Department of Natural Resources took a tour of Indian Lake—which currently has three aquatic weed harvesters running. DeWine was adamant that the lake’s issues will be addressed.

“There’s nothing unhealthy about this lake right now. It’s going to a change and the change does in fact occur,” DeWine said. “If you’re fishing here, you’re not happy about the change. If you’re trying to boat here, you’re not. And we have to do everything that we can to make it so that the economy of this part of the state continues to be good, recreation continues to be good. That’s the goal here.”

DeWine met with several experts including Aquatic Biologist Edward Kwietniewski. He explained the main culprit for the problems at Indian Lake.

“The dominant species that we’re currently seeing is Eurasian watermilfoil,” Kwietniewski said. “It is a non-native, considered to be an invasive, nuisance or toxic plant. It grows very, very rapidly.”

He said it spreads by fragmentation. For instance, when it gets chopped up by a boat motor. Kwietniewski said the vegetation has spread quickly over the past two to three years.

ODNR and the state are coming up with an attack plan to ensure the vitality of the lake. In the short term, more weed harvesters will be added and a study is being started to come up with a long-term solution. 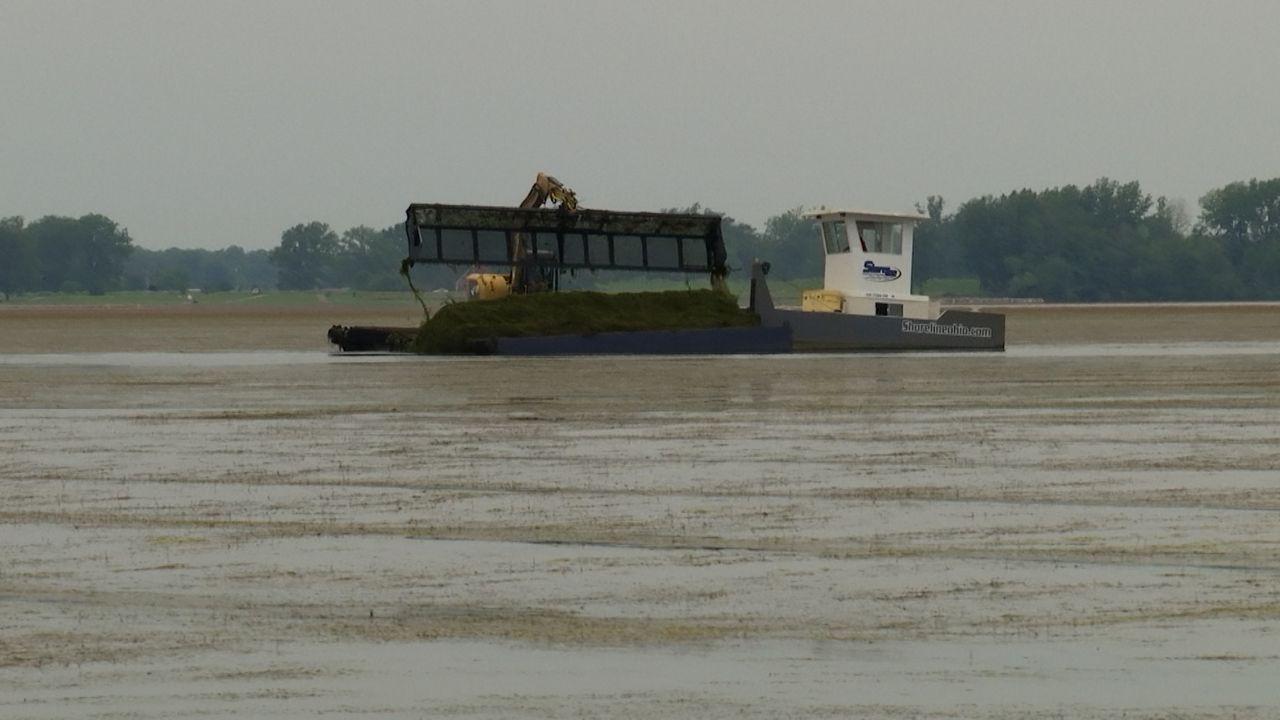 A barge collects the invasive weed that is clogging up the water at Indian Lake. (Tino Bovenzi/Spectrum News 1)

“The lake is not unhealthy; the lake is simply impaired for its best use,” Kwietniewski said. “Boaters aren’t able to boat around on it, fishermen are struggling a little bit. That doesn’t mean the lake is dying. That’s not a fair assessment of the lake. What is really more fair is that the lake is impaired and we need to remedy that impairment.”

Locals are hopeful improvements are made sooner rather than later, their well-being depends on it.

“My hopes are they get it under control quickly and that they can save our lake,” South said. “Our lake means a lot to all of us. I know it’s not going to be an overnight fix. I know it’s not gonna be changed in a few weeks—it’s gonna take some time. But I don’t know how we’re going to survive all of this.”