Originally slated to be the opening city for their reunion tour in 2020, My Chemical Romance returned to Detroit on September 13th, and packed Little Caesars Arena to the rafters. Their last visit to Detroit “Rock City” was in 2011. Almost 11 years to the day they played an 11-song set as part of the Honda Civic Tour at DTE Energy Music Theater. The pandemic played havoc on their grand return to the stage, and the chatter outside in line amongst the fans before doors tonight set the tone perfectly. Walking around I saw fans ranging from adults, whom 11 years ago would have been perfect MCR fans, donning old tattered and torn tour merchandise from all those years ago. As well as teenagers, who either fell in love through their parents continuously blaring it at home reliving their youth, or maybe, just stumbling across them on a streaming platform like Apple Music or Spotify. Either way, fans young and old ran for their seats upon door opening.

“The Foundations of Decay” usually has a five second white noise opening, before music comes in… but tonight, as screens on either side of the stage read “have a good time and take care of one another,” the white noise started softly , and gradually got louder and louder, until the lights went out, and the moment we were all waiting for finally happened. Gerard, Ray, Mikey, and Frank stepped into the spotlight, and laid into their newest single. Over the course of two hours, we were treated to nineteen songs, spanning six albums. Immediately following “Foundations of Decay,” My Chemical Romance went straight into their first ever single “I’m Not Okay (I Promise), which erupted the crowd like I’ve never seen before. From that moment on, it felt as if the quartet from New Jersey had never really left.

As the band played on, the songs became more hypnotic, the crowd got louder, and sang harder. Kids that were not even alive during the last MCR tour were wearing Black Parade t shirts and screaming at the top of their lungs, it truly was pandemonium. Throughout the performance, Gerard would ask how the crowd was doing, and when someone said it was too packed, he nicely asked the crowd to take two steps back and counted to three. And there was no recourse on his request, like a tidal wave, the crowd dispersed, and the onslaught of music continued. Then… it came! The one note, that every boy, girl, man, and woman was waiting for… the “G Note”! Infamous to its core, that one note, took an already energetic crowd, and supercharged them. By the time, the first chorus of “The Black Parade” hit, there wasn’t a person sitting in a seat, and the main floor was one of the largest mosh pits I have seen in a while. Fans took to the skies, and surfed from all angles, making security earn their money tonight.

From that moment on, our ears were treated to every song in their greatest hits repertoire. “Teenagers,” “Mama” and “Na Na Na (Na Na Na Na Na Na Na Na Na)” to name a few, before ending the main set with “Famous Last Words” and “Sleep.” As the lights went out, and the crowd started chanting for more, Gerard, Ray, Mikey, and Frank graciously walked back out on stage, and gave us “vampires Will Never Hurt You” followed by show closer “Helena”. The show at Little Caesars Arena on this night will rival even some of the monstrous names that play here in the months to come. Groups on tour, after taking a two-year break from COVID restrictions really have nothing on the 13-year in the making glorious return of My Chemical Romance. 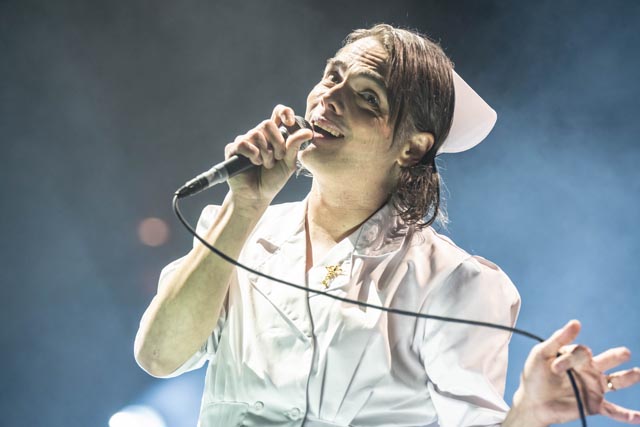