#TurksandCaicos, November 24, 2022 – Twenty-seven days after he was listed as a wanted man in the Turks and Caicos and The Bahamas, 32-year-old Brandon Leonardo Rahming is dead. Killed by police gunfire, in one of his regular haunts; Dockyard in Providenciales.

The police report, issued on Wednesday, was careful not to say this was a shootout. It was precise in calling the confrontation one that presented a threat to the team of law enforcers.

“We’ve had an incident in here within the last hour which resulted in what is believed to be a police involved shooting,” said Trevor Botting, TCI Police Commissioner in a video message shortly after 12 noon.

Civilians had shared, the spray of gunfire heard around 11 am was rapid and pounding, that they doubted anyone would have survived it.

At the onset, residents widely believed that Rahming was dead, however, that would not be confirmed in the initial statement by Police.

“Two non-police issue firearm were recovered at the scene of the shooting.

During the same incident, another man was arrested for firearms and drug offenses and he remains in police custody.”

It would be hours more before the TCI public got the confirmation on the death of the country’s most notorious suspect, a most wanted man.

Not the same in The Bahamas where Wayne Munroe, the Minister of National Security when confronted with questions about the killing confirmed to media that the person shot to death was Brandon Rahming, formerly of Freeport and Nassau, believed to be a Bahamian or of Bahamian heritage and wanted in both countries. He was speaking to the press in the early afternoon outside of the House of Assembly in Nassau. 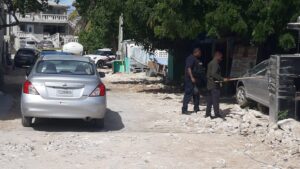 The Bahamas also has an interest in the matter. As many as 24 members of the Royal Bahamas Police are on loan to the Turks and Caicos, as part of a joint force assembled to uproot a transnational gang network.

Minutes after 7 pm, the Royal TCI Police confirmed what most had suspected; “During this operation, a group of men, who were believed to be carrying firearms were challenged by police officers. One of the men, who I am now naming as Brandon Rahming, was shot by police officers and was pronounced dead at the scene of the incident in Dock Yard,” said Botting.

To say feelings about the death of Rahming were mournful would be a stretch. If voice notes reportedly shared by the now deceased young man were indeed from him, he painted a very dark picture of himself. Announcing that he had no regard for life, even innocents; no fear of law enforcement; no respect for the rule of law and promising more killings as his remedy to actions he believed to be hurting his alleged criminal income.

Many members of the public wanted him to be taken alive because with Rahming dies so many unanswered questions and leaves unsolved, a multi-faceted mystery including which killings he was directly responsible for, what fueled the murderous rampage that terrorized the country for nearly three months and who are his accomplices as it was clear “BrandonLee” was not acting alone. 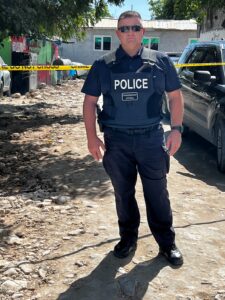 Now, following the 11 am shooting on November 23, there will be an investigation to validate the actions taken by police; already some have taken to social media to accuse law enforcement of responding in the extreme, claiming ‘Rahming was unarmed and turning himself into authorities’ when shot down.

Some, who say they have proof, claim their cell phones were confiscated by police on site.

“As is routine in these types of incidents, I will be inviting an independent review of the circumstances of the discharge of firearms by police officers during this morning’s incident from a Force within the Region. I expect this to begin in the next few days,” announced Botting.

In the aftermath, residents have expressed to our news organization that the prayer and hope now is the death of Rahming brings to an end to the violent tirade which claimed nearly two dozen lives including a boy toddler, a tourist man, several targeted citizens, an elderly father and a pregnant mother.