Jump in the Maldives

Thatched villas, powdery white beaches, spa, infinity pool, international cuisine and 30 idyllic spots in which to dive or snorkel around a perfectly turquoise lagoon: Angsana Velavaru is everything you might expect from a private paradise island resort and more. While most Maldives resorts claim an eco-conscience, this one supports it with an on-site marine conservation lab. Save a total of £1,600pp if you book by December 15, which leaves seven nights’ all-inclusive on selected May dates costing from £2,549pp in a beachfront villa, including flights from Heathrow and seaplane transfers (tropicalsky.co.uk) .

Machu Picchu in a week

A four-day Inca Trail hike through cloud forests to the mind-boggling Machu Picchu citadel on its spectacular mountain plateau takes up half of this small group tour or Peru. But that still leaves time to clink corn beers with locals, trawl flea markets in Lima and have a Cuzco cooking class. Numerous January and February departures are almost a third cheaper if you book this month (November), so cost from £804pp, including transport, seven nights’ B&B, excursions and seven other meals (gadventures.com). Fly to Lima. 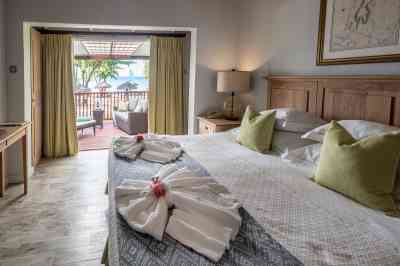 A room at the hotel East Winds

Supporting more than 30 tropical bird species, the hotel East Winds occupies a secluded 12-acre plot of botanical gardens in the north of St Lucia. Scattered amid its luscious plantings are 26 cottages, an organic spa and an acclaimed Caribbean restaurant; it’s near a palm-dotted private beach. Steel-pan bands regularly play and activities range from rum tasting to boat trips. Book by December 12 and seven nights’ all-inclusive between April and August next year will cost from £2,999pp — discounted by a quarter — including flights from London and private transfers (caribtours.co.uk). Look for leopards in South Africa

Ever been on a safari? Now’s the time to bag a bargain one. Three hours north of Johannesburg, the superbly run Sebatana Private Reserve offers night-time jaunts and silent bush walks alongside traditional game drives. Giraffes, crocodiles, zebras and baboons should all make an appearance, and you’ve an unusually good chance of spying a leopard on small-group tours that include a week there. Guests sleep in a 14-room poolside lodge. Reduced by £742 if booked by December 4, nine nights’ full board now costs from £2,108pp including flights from Heathrow, departing on January 10 (newmarketholidays.co.uk). A room at the Radisson Blu Goa resort

In India, after balmy days spent snapping Morgao’s colonial-era mansions or slumbering below mango trees on Cavelossim’s restaurant-lined public beach, retreat to a private estate that’s home to the Radisson Blu Goa resort. Greenery surrounds 132 colorful rooms and a large pool, menus cover every cuisine from north and south Indian to Italian, Greek and Chinese. Knocked down by £240 and departing on December 16, seven nights’ B&B costs from £1,219pp including flights from Manchester (olympicholidays.com). 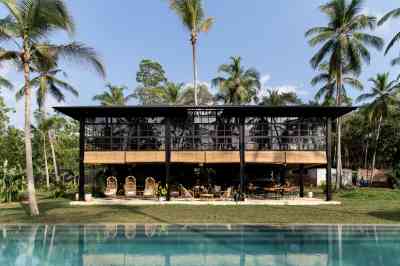 Surrounded by surfer shores, rice paddies, jungle and fishing hamlets, southern Sri Lanka’s boutique Palm hotel features six chic cabanas alongside a gym, a pool, yoga classes and local food. It has just added a four-bedroom villa and two romantic “treetop” suites silenced amid coconut palms. Behind black steel exteriors, the suites feature partly alfresco bathrooms and open frontage so you can watch monkeys from your bed. Thanks to 28 per cent savings, seven nights’ B&B in one costs from £945 (palmhotelsrilanka.com). Fly to Colombo.