For those who bravely untangle last year’s Christmas tree lights, imagine covering an entire zoo or botanical garden with the illuminating bulbs.

All across Alabama, the custom of lighting up Christmas rises to the level of art with dancing elves, prancing reindeer, walking Gingerbread men, and in one case, a mooning Santa. The displays range from dramatic to whimsical, high in the tree tops to below ground, and from elegant to so tacky that the infamous Griswold house would not make the cut.

From November through January, you can fill your senses with holiday cheer. Start early, and follow the lighted trail from north to south. Or, choose an old favorite to share with the whole family. These light displays are filled with joy, whimsy, motion, humor and the holidays at their best.

Santa meets astronauts in the Rocket City. Starting with a patriotic red glare, moon rovers light the way. Just down the road, space meets pre-history with dinosaurs alight. In between there are fairy tale heroes and heroines, woodland scenes and a host of flowers. Follow the 2.5-mile path either by foot or car through the light display scenes. On dog walking nights, your four-footed friend can chase an animated squirrel. The lights are on from November 11 through January 1 from 5:15 pm to 8:30 pm

Christmas at the Falls (Gadsden)

Arrive early at Noccalula Falls for a two-for-one spectacular. Get there before dark and take the walkway to the Falls where you can see nature’s superb light show with a sunset/view combo. Then, take your time walking through the lights and music of dancing snowflakes and exotic animals. Get a cup of cocoa and ride the train that circles the light show. On Paws for the Falls nights, canine companions are welcome, but you may want to keep them away from the animated tigers! Santa visits between November 25 and December 23. The lights run from November 24 to January 2.

Here is your chance to hear sleighbells in the snow. With a snow machine and horse and carriage rides, you can jingle all the way through Sportsman Lake Park. Or take the train. Or, drive your car to see more than a million lights sparkle along the way. Snap your Christmas card picture in the photo booth. Santa may photobomb you with candy canes. The park will be celebrating the 20th year of this holiday spectacular. Open Nov 19-23, 26-28, Dec 1-5, 8-12, 15-23. December 26-30 is drive thru only. 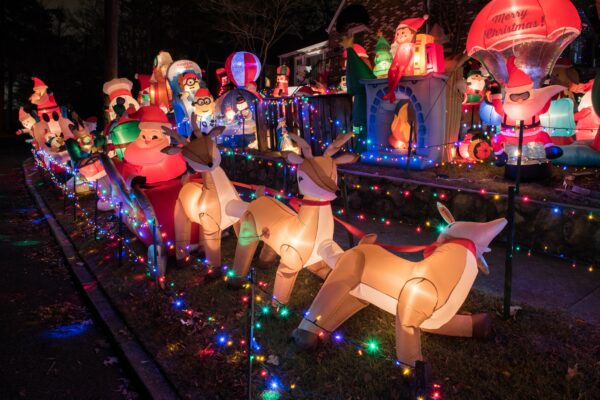 Going against the grain of beautiful lights, the Wacky Tacky Light Tour seeks out the most outrageous, crazy, kooky and just downright funny home light displays. They claim their standards are low, and hard to meet. This two-hour bus tour includes Santa’s Trailer Park, Dueling Neighbors, Mooning Santa, Toomer’s Corner in Lights, and Star Wars—since nothing says Christmas like a few Darth Vaders. Including a Hanukkah House with its spinning dreidel, fiddler on the roof, and Joy to the World, minus the ‘J’, it is your most inclusive light tour choice. The homeowners are in on the joke, as someone who hangs 10,000 lights from his roof is not cursed with shyness, and they lobby to join the tour. The tour runs four nights: December 13, 15, 20 and 22, with buses leaving every ten minutes. Reservation required. Participants can purchase seats or reserve a private bus for this popular fundraiser for underserved children.

Lanterns glow in the night at this new holiday show, which has been described as Zoolight Safari on steroids. Wild animals and sea creatures rise into the sky aglow from lantern lights. You may spy a mythical dragon along the way! Before you walk through the Zoo, take a lift on the Red Diamond Express Train, followed by a twirl on the Carousel. While you will not be able to see the animals, you may hear some of the night calls, giving the setting all of the magic of an illuminated jungle. This show runs on non-rainy nights from November 16 through January 16, Wednesday through Sunday from 5 pm to 9 pm, entry closes at 8 pm 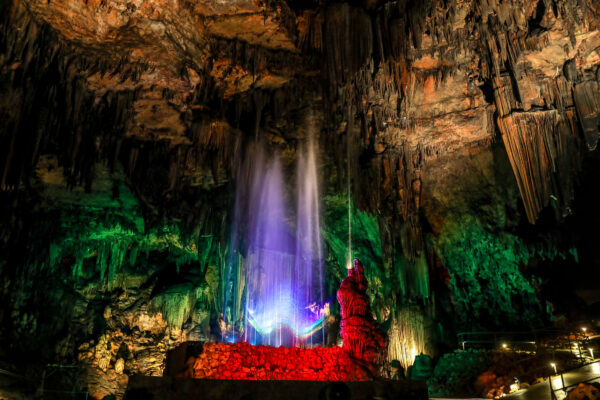 Prepare your pupils as you walk into total darkness before laser lights illuminate the caves in a colorful explosion. Majestic Caverns (formerly Desoto Caverns) enjoys a grand theater for its light show: a 120-foot high and 100-yards long cathedral cavern. This show is the perfect choice for families with young children: it runs during the daytime, is not impacted by weather and stays a modest 60 degrees year-round. Their Christmas Laser Light Show will be on display during all tours from November 20 through December 31, from 10 am to 4:30 pm

Penguins can be spotted outside as the Montgomery Zoo transforms into a Winter Wonderland. Thousands of lights morph into your favorite animals. Walk the tour, but also catch a ride on the train or the Zoofair Skylift. Warm up in the Mann Museum while you get new decorating ideas from the Christmas Tree Village. Santa and fresh-baked cookies accompany hot chocolate on select nights. Live entertainment plays at the Overlook Café. The display runs from December 2 to 25. Give the gift of life for animals in the wild at the Animal Angel Tree.

There are no beads or moon pies, just a million lights—in fact, the largest synchronized light show in Alabama. Dancing on the street remains, however, as illuminated figures sway to the music. Tune your car radio to the posted station as you drive through. Expect to hear new holiday hits along with your favorite traditional carols. The path will light your way through nutcrackers, trees, and snowflakes as they sparkle to the rhythm. The illumination lasts November 11 through January 1, 6 pm to 11 pm 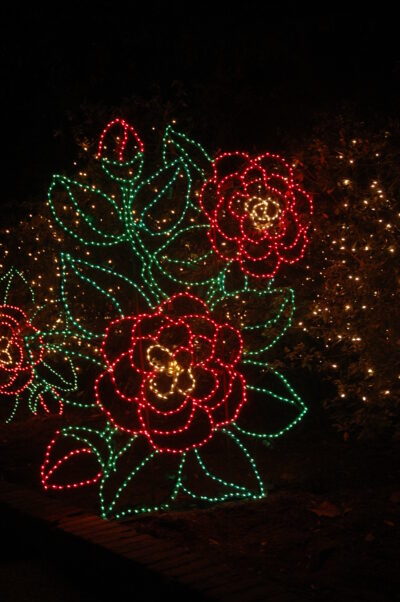 Come and see how creative the gardeners are—three million lights crafted into scenes designed and built by three Bellingrath employees. They work year-round putting the magic in Magic Christmas in Lights. There are plenty of botanical settings such as Secret Garden, Flower Walk, and Live Oak Plaza. If you look carefully, fish swim in the trees, butterflies flutter, and dragons parade in the Asian-American Garden. A Nativity Scene and Mardi Gras celebrate two holidays in separate scenes. Candyland and Gumball Cove are popular with the little ones. The illuminated path is made for walking, but wheelchairs and wagons are available. Tour the house, resplendent in holiday decor. Santa can be found nightly in the Magnolia Room from November 25 through December 23. Hot chocolate and hot food available.

Decorated from stem to stern, these boats are floating parties. Starting at Lulu’s, boats float on the Waterway Village with lights ablaze, heading for The Wharf. The parade can be viewed along the canal from Gulf Shores or Orange Beach. The boaters decorate sails and sides with colorful lights and illuminated figures that glide by in the dark. The festivities begin at dusk.

Don’t miss out! Subscribe today to have Alabama’s leading headlines delivered to your inbox.